Over the years while reading Te Rūnanga o Ngāi Tahu annual reports, you might have come across the term “relativity” – a mechanism built into the Ngāi Tahu Claims Settlement Act 1998 that has required the Crown to pay several million dollars to the iwi over and above the initial $170 million. Kaituhi Christopher Brankin explains the origins of the Relativity Mechanism, and unpacks the complexities of its function.

When Te Rūnanga was negotiating the groundbreaking Treaty of Waitangi Settlement, the iwi was already resigned to the reality that any economic redress would only represent a fraction of the actual historic loss. “We wanted a sufficient settlement to enable our people to move into full participation in New Zealand society and culture,” says Tā Tipene O’Regan, lead negotiator of the Ngāi Tahu settlement. “On the other hand, we had no wish to bankrupt the society that we wished to become a part of.”

The reality that any compensation could never equate what was lost was compounded by the Fiscal Envelope, a policy that was intend-ed to limit the impact of Treaty settlements on the Crown coffers.

The Fiscal Envelope policy stated that all historical (pre-1992) Treaty of Waitangi claims would be settled for a total of $1 billion, in spite of the acknowledgement by Crown valuers that the loss to Ngāi Tahu whānui alone was between $12 billion and $15 billion in 1990 dollar terms. To iwi, this was a drop in the bucket, but to the wider public it was a line in the sand amid a climate of public apprehension about exactly what Treaty settlements were. There was much politically-engendered speculation about “excessive Māori expectations”, particularly from the more racist elements both inside and outside parliament. Ngāi Tahu and Waikato-Tainui were the first waka launched on this new journey between Māori and the Crown, and with that came some turbulent water.

“The relativity concept was driven by both Tainui and Ngāi Tahu,” recalls Tā Tipene. “Our anxiety was that over time, as settlements became more broadly politically and socially accepted, we would find ourselves relatively disadvantaged compared to others.”

In simple terms, the mechanism provided insurance against the predicted overflow of the Fiscal Envelope, entitling each iwi to a percentage of all Treaty settlements relative to the $1 billion cap. After a number of calculations, it was determined that the $170 million economic redress Ngāi Tahu received equated to 16.1 per cent of the Fiscal Envelope in 1994 dollar terms (the year on which the Relativity Mechanism was based).

Waikato-Tainui and Ngāi Tahu may have faced similar circumstances, but their settlements differed in a number of ways. Waikato-Tainui settled first, and did so outside of the Waitangi Tribunal process, relying instead on the findings of various earlier Commissions of Inquiry into the raupatu (land confiscations). Ngāi Tahu took the tribunal approach, and Tā Tipene recounts a conversation with former National Prime Minister Jim Bolger as negotiations were coming to a conclusion. “I told the Minister that we were addressing a claim for around half the land mass of Aotearoa,” says Tā Tipene. “But he was adamant we couldn’t have more [economic redress] than Waikato, demonstrating the political pressures the National government were under.”

This pressure to minimise the cash cost of settling the Ngāi Tahu Claim was mitigated by the competing pressure to settle quickly. Rather than battling for more cash, iwi negotiators leveraged the inclusion of a number of “bolt-ons” to the Ngāi Tahu Claims Settlement Act, 1998. These bolt-ons, which included the Relativity Mechanism, served to increase the actual value of the settlement well beyond $170 million. The Government, however, anxious to publicly minimise the cost of Treaty settlements, kept publicly referring to the Ngāi Tahu and Tainui settlements as having a quantum of $170 million, and the media followed suit. The iwi did not object – after all, it was no more anxious than the Crown to attract hostile attention in the climate of the time.

This explains the origins of the Relativity Mechanism, a complex tool that would not begin to deliver its value for 18 years. Every year, the Crown provides Te Rūnanga o Ngāi Tahu with a statement of payments made to other iwi as redress in that financial year. The statement also tracks the total quantum paid against the Fiscal Envelope, with a requirement to notify Ngāi Tahu if a payment is required to maintain the 16.1% relativity. 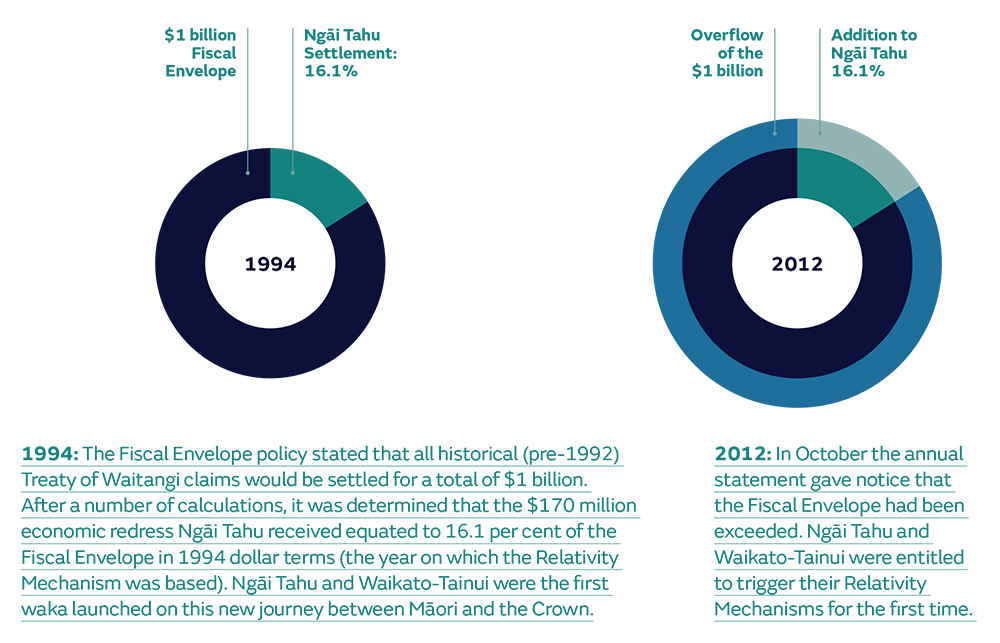 Te Rūnanga o Ngāi Tahu has disputed the Crown calculation each year. The complexities of the Relativity Mechanism are typically in how both Ngāi Tahu and the Crown determine what should be captured by the mechanism, and how to attribute accurate value to it. There are a number of approaches the Crown takes to provide redress to iwi for historical Treaty claims, and some are excluded from the Relativity Mechanism for various reasons. One such exemption is expenditure in the name of “good government” where all Māori benefit, such as funding of Māori language initiatives.

Another obvious exemption is that Waikato-Tainui and Ngāi Tahu are unable to claim a percentage of each other’s Relativity Mechanism payments. Other exemptions relate to payments or loans for the purposes of indemnifying claimants for GST or other tax; costs incurred by the Crown in negotiating claim settlements; ex-gratia payments made to non-claimant land owners for property purchased to settle a historical claim; and compensation for loss of rights in respect of property transferred to claimants to settle a historical claim.

In October 2012 the annual statement gave notice that the inevitable had occurred: the Fiscal Envelope had been exceeded. Ngāi Tahu and Waikato-Tainui were entitled to trigger their Relativity Mechanisms for the first time. The statement set out the amount the Crown considered it owed Ngāi Tahu, which is known as the “Undisputed Amount or Payment”. Te Rūnanga advised the Crown that the iwi was triggering the mechanism, and the undisputed amount should be paid. Te Rūnanga also advised that a considerable amount was not included in the statement, and that these “Disputed Items” would need to be resolved.

The undisputed payment of $68.5 million was made in December 2012. This money was invested first as a loan, and then as equity, in Ngāi Tahu Holdings (NTH). It is important to recognise Relativity money for what it is – deferred economic redress that should have been paid at the time of settlement. The majority of payments Ngāi Tahu has received for historical claims have been similarly invested in NTH, building the tribal capital base while generating an ever-increasing income for distribution. The injection of capital in 2012 contributed to a strong period for NTH, and annual distribution milestones were reached several years sooner than forecast. It seems unlikely that this centralised model of wealth generation will remain front and centre as the iwi continues to grow capacity, and amazing outcomes are driven from the marae. But for now, economic redress is treated as it was at the time of settlement.

Once the undisputed payment was made, the Crown and Ngāi Tahu turned their minds to resolving the disputed items. Reasons for dispute include exclusion of settlements in the calculations; incorrect values attributed for some properties; properties transferred at no cost; payments and funding that are not included in calculations; and a lack of information from the Crown regarding their rationale for certain calculations or exclusions. Even the interpretation of the exemptions explained above are often a cause of dispute.

It is not surprising that there were inconsistencies between the Crown and iwi on the correct interpretation of the Relativity Mechanism. Notwithstanding the Crown’s understandable yet unfortunate prerogative to minimise the impact of the mechanism on Treasury coffers, the mechanism is a unique contractual instrument that was completely untested until 2012. A process to explore the legal questions raised by the dispute letter was necessary. After some toing and froing, the parties agreed to take a process of arbitration to seek resolution of these issues. Arbitration is perhaps best described as a private High Court hearing. The issues are presented in the same fashion as a judicial hearing, by legal counsel, to an arbitrator. The arbitrator, in this instance former Supreme Court Judge Sir Andrew Tipping, is charged with making findings that are legally binding. The parties signed an arbitration agreement in August 2013.

It is pertinent to note here the partnership approach that Ngāi Tahu and Waikato-Tainui have taken to the disputes resolution process. As the first iwi to settle their Treaty of Waitangi claims, and the only iwi with Relativity Mechanisms, the tribes have shared much of the post-settlement journey. Many of the interpretation issues affected both, and so a joint approach was agreed. Both iwi retain their own counsel, but work collaboratively to progress this kaupapa.

Since 2012, two arbitration hearings have been completed. To date, the hearings have provided binding findings on treatment of the Māori Reserved Land Act and related settlements, treatment of the South Island Landless Natives Act 1906 (SILNA), and gifts and claimant funding provided to other iwi as they settled. Negotiations also partially resolved issues to do with the groundbreaking settlements along the Waikato River. As well as securing Ngāi Tahu some additional pūtea, these hearings helped clarify matters for future interpretation of the mechanism, and set a precedent for dispute resolution. 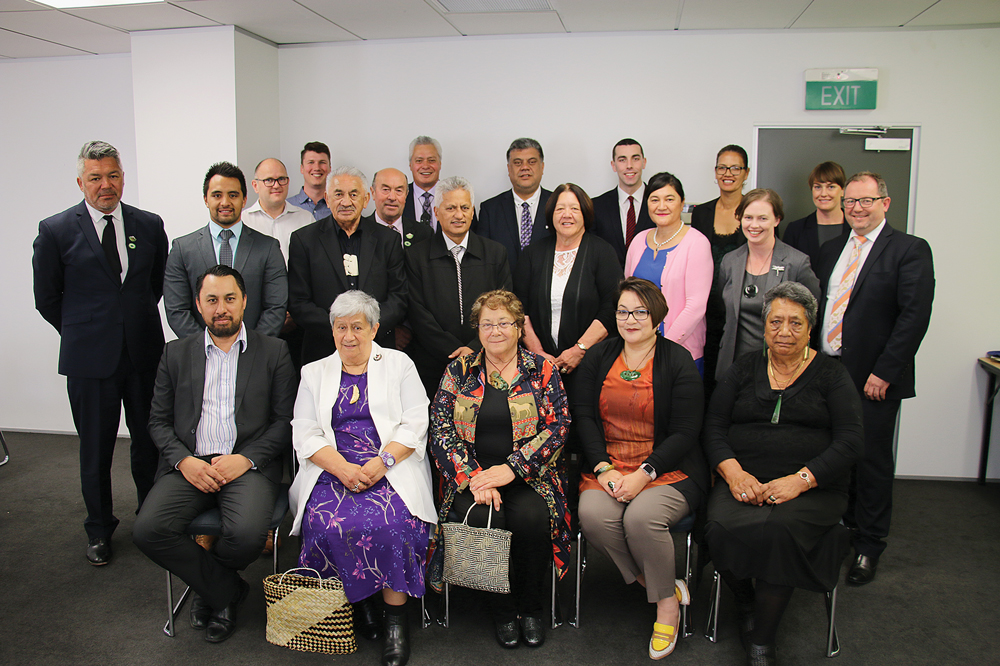 A ruling that substance should be considered over form was positive for the iwi, as it makes it more difficult for the Crown to structure economic redress in such a way that the mechanism is circumvented in future settlements. While many findings favoured the iwi, some also favoured the Crown, leading to the withdrawal of similar disputed items. Despite this, there are still a number of outstanding items to address. At the time of writing, a third arbitration hearing is being undertaken, and more are likely to be necessary.

An optimist would suggest that the legal precedents set by the first series of hearings would mean the mechanism would function more accurately in the future. But a realist might suggest that the constantly evolving settlement process will mean ongoing clarification is required. The way contemporary settlements are structured is beyond what was available to the architects of the Ngāi Tahu Settlement, and yet the Relativity Mechanism remains relevant.

The ongoing disputed items from the 2012 tranche will now be joined by those from the 2012–2017 period. A highly-motivated government saw an unprecedented level of Treaty settlements achieved in those five years, both in terms of numbers and economic value. There were also some unique new co-management approaches, such as the legal personality of Te Urewera and the Whanganui River. These complex settlements may take some unravelling to determine whether they are captured by the Relativity Mechanism. The Mechanism is applicable until 2044, so there is plenty of time to address these matters, and with a few large iwi still to settle, its value will continue to be enjoyed, whether in pūtea or via new pathways.

“This very fruitful evolution that’s been taking place in recognising the legal personality of Te Urewera in Tūhoe or the river in Whanganui might be a very productive way of amending relativity so it is not solely a matter of cash,” says Tā Tipene. “That gives rise to things such as co-governance and co-management, which could well satisfy a number of very old and persistent grievances.”

In summary, the Relativity Mechanism is an elegant insurance policy, and the foresight of the settlement negotiators continues to bear fruit. While it has its detractors from outside the iwi, it is important to understand that Relativity is not “double dipping”. Relativity payments are deferred redress, and are a contractual entitlement that Ngāi Tahu whānui have had to wait 20 extra years to receive. As the tribe moves forward, the challenge remains to ensure that redress continues to strengthen the people.