The takiwa of Te Taumutu Rūnanga centres on Taumutu and the waters of Waihora and adjoining lands and shares a common interest with Te Ngai Tuahuriri Rūnanga and Te Rūnanga Arowhenua in the area South to Hakatere. 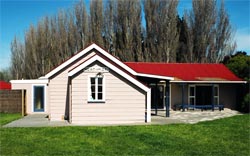 The people of Te Taumutu Rūnanga descend from the tīpuna (ancestor), Te Ruahikihiki and his son Moki II who settled at Taumutu in the seventeenth century. Te Ruahikihiki moved from Akaroa Harbour to Taumutu on the southern shores of Te Waihora (Lake Ellesmere). Te Ruahikihiki settled at the pā~traditional fortified village Orariki, which is where the present day Hone Wetere church and hāpu urupā (sub-tribe cemetery) are located.

Moki II established his pā site nearby at Taumutu, on the site where the present Ngāti Moki marae is located, near the south-western edge of Te Waihora. In 1891 a wharenui~meeting hall, named Moki, was opened on the site of the original historic Pā o Moki.

The meeting hall has undergone many alterations and additions and is now known as Ngāti Moki. Grass covered mounds of earth can still be seen at the Ngāti Moki pā site. These ramparts run parallel to Pohau Road and are the remains of the traditional battle defences of the original pā.