The signing of an aquaculture agreement between Te Rūnanga o Ngāi Tahu (Te Rūnanga),
Te Ohu Kaimoana, and the Government, delivers on the Crown’s settlement obligations and creates opportunities for Ngāi Tahu to undertake marine farming in Murihiku.

Ngāi Tahu has been advocating for its rights in the marine aquaculture sector since the 1992 fisheries settlement. Since 2004, the Government has been settling Māori commercial aquaculture claims and providing iwi with 20% of a region’s consented aquaculture space. The Southland agreement has been under discussion for seven years and provides Ngāi Tahu marine space to develop aquaculture.

“Ngāi Tahu want to be at the forefront of this sustainable and developing industry, as we undertake aquaculture projects which are aligned with our tribal values of rangatiratanga and kaitiakitanga, to help achieve the aspirations of our people,” he says. 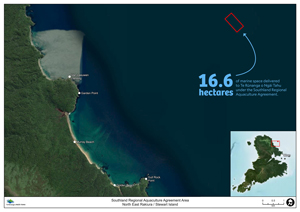 As a result of the Southland agreement, a 16.6 hectare area of aquaculture space off the northern coast of Rakiura/Stewart Island will be transferred to Te Rūnanga o Ngāi Tahu to use for aquaculture. The iwi will still need to apply for resource consent for any marine farming activity.

The Government’s vision is for the New Zealand aquaculture industry to grow to $3 billion by 2035. Tā Tipene says aquaculture complements New Zealand’s wild fisheries, and he hopes potential projects, such as offshore salmon, seaweed, or native species farming, will lead to new jobs for Southlanders and others around Aotearoa.

“Aquaculture is a low emission industry which employs more than 3000 people in the regions and generates over $650 million in revenue. This growing industry could help to boost regions grappling with the challenges of COVID-19 and the loss of international tourism.”

Te Rūnanga o Ngāi Tahu CEO Arihia Bennett says a tribal aquaculture strategy is being developed to support the iwi to lead and develop marine farming assets and activities throughout Aotearoa, including utilisation of the settlement space in Southland.

“Papatipu Rūnaka are the anchors at the centre of this regional agreement. While the settlement area is a tribal asset, and how it is utilised has yet to be decided by Te Rūnanga, mana whenua will remain at the heart of any decisions about projects to be developed in this space.”

For Ngāi Tahu, harvesting kaimoana has been a way of life for centuries. Stories about the ocean were traditionally passed down from tīpuna (ancestors). Home to the sea god Tangaroa, Ngāi Tahu used the oceans to reach Aotearoa from Hawaiki, eventually settling in Te Waipounamu.

“Ngāi Tahu has a strong connection with the ocean, which includes intimate knowledge of and respect for the sea. This is what makes a sustainable industry such as aquaculture such a natural fit for our people,” says Tā Tipene.

The respected Ngāi Tahu kaumātua says Murihiku could lead the way.
“Aquaculture could be a key sector for diversifying the Southland economy, as well as a potential opportunity to share Murihiku kaimoana with the rest of the world,” says Tā Tipene O’Regan.