A conversation with Arihia Bennett 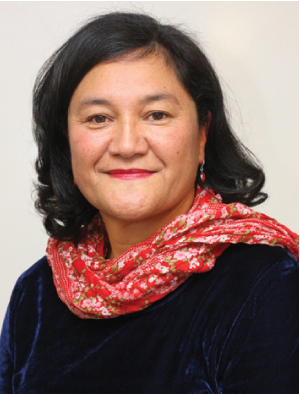 Arihia Bennett, the new chief executive of Te Rūnanga o Ngāi Tahu, comes to the role from He Oranga Pounamu which is mandated by Ngāi Tahu to organise and integrate health services. Before becoming chief executive at HOP, she was regional manager, Te Waipounamu, for Barnados New Zealand.

Arihia (Ngāi Tahu – Ngāi Tūāhuriri, Ngāti Porou), was a Canterbury Earthquake Recovery Commissioner following the September 2010 earthquake, a director of Ngāi Tahu Development Corporation from 1999- 2002 and chair until 2005. In 2008 Arihia was made a Member of the New Zealand Order of Merit for services to Māori and the community.

Congratulations on your appointment and on becoming the first woman in the job.
I am the first woman in what I would call an executive leadership role. However I am not the first woman in a tribal sense with regard to leadership and bringing our people to the fore. I think of my great-grandmother Tāua Hutai and the stories I have been brought up with hearing that she was a solid champion who worked towards outcomes of rangatiratanga for our people, and she was just one of many women.

I think of my paternal grandmother on my Ngāti Porou side whose name I take, Arihia Henare Ruwhiu. She too was an advocate for whānau and hapū development. Right up there is also my maternal English grandmother, Freda Elizabeth Tainui, who married into the tribe. Following the loss of her husband and my Pōua, Te Hira Tainui, who was with the 28th Maori Battalion during World War II, she raised her three daughters and then went on to marry Albany Harry Tainui who had also been with the 28th Maori Battalion and they had two daughters. Freda was diminutive in stature, stoic in nature and clear on standards so raising five daughters must have been girl power in itself.

When I think of my new role, I see it as technical in task and carrying high-level responsibilities. I am sure these are common for many women of the past, present and the future.

What prompted you to apply?
A few things. I’ve been engaged in working with tamariki, whānau and communities throughout my career, I’ve also worked alongside the papatipu rūnanga from a voluntary or community point of view and this opportunity enabled me to fuse the two together.

With all my experience and learning from the past few years, I saw this as a step to be able to bring something back to the tribe at this time in my life. I think it is good timing. Why now? All those things are saying I am ready. This is the right time. To bring all my learning into the current context and take the tribe to its next step.

The other thing I have noticed over recent years, and from observing how the tribe has responded to the Canterbury earthquake recovery, is that our focus needs to grow in our people development. I mean at the grassroots in direct whānau wellbeing. There are many things we are doing around land, papatipu rūnanga development and business, but when we look at growing whānau holistically around parenting, health and wellbeing, moving through to all facets of the education sector, housing options and work preparedness, we touch them in different ways but not comprehensively. I thought this was a chance for me to come back to the tribe and bring them to the fore.

That sounds like a big challenge.
It is a big challenge and I think the first part is to immerse our governance and leadership psyche, to understand this is just as important. We have worked hard to establish and grow a sustainable economic base. however we forget the other side. It is not as sexy or savvy as it can be complex and at times these are generational whānau issues that go into the too hard basket so we ignore them. I look at all the tribal development we are currently undertaking and the return that it brings back to the Canterbury economy. We are working largely with the economic return to the community and this should be celebrated as it brings about jobs and whānau wellbeing but I am interested in those who may not have that capability to actually participate.

If people lack confidence, self-esteem, motivation to get off the couch, and they don’t have the guidance, coaching and mentoring to get them through, they will never actually participate. Again it is easy to ignore this so I suggest now is a good time to support whānau to find their own solutions.

And when I say essentially from my whānau base, I include extended whānau and hapū. One thing we talk about when we engage within our hapū, sometimes that is a confronting environment and you can feel your opinion is not valued and you can be challenged very bluntly and directly.

I prefer to think of this enthusiastic debate. It is all part of learning that we are all whānau. I tend to be the optimist with a focus on hope and potential.

I think my confidence comes from being whānau – centered and also from the way I have worked alongside many whānau as a social work practitioner. Everyone has a voice, and everyone deserves the opportunity to find that voice, and to grow and develop even in the most difficult circumstances. I am a Virgo by nature, I am a logical thinker and really like to unpack things systemically. I like to keep things basic, down to earth and honest. I have no plans to change these fundamentals now.

Has the high profile of the role surprised you?
No it hasn’t surprised me but I need to be an effective leader, and strong advocate in this role. That means remaining focused on the benefit for our people in a wider sense which does mean building my knowledge base, developing strategic, meaningful relationships and collaborating with others across the community such as those in the commercial sector, the community and with the Crown.

I need to keep current on the big issues, know who are the key players, and lead towards solutions. Having talent and wisdom around me is a necessity.

What is your vision for Ngāi Tahu?
It is based on a journey towards self-determination. Firstly, I think we need to become more comfortable in having conversations with whānau, and hear their stories, their aspirations and their expressions on where they want their whānau to head to. Within our own whānau, we make those decisions on where we are heading. We don’t wait for someone out there to do it for us.

Part of my role will be to bring forward more conversation and connection to enable people to have a say in being the drivers of their own aspirations. We have to get better at listening and talking with people rather than talking at them or going away into another room and making the decisions on their behalf.

The flip side of that is it is easy to blame the corporate. We were talking about it at our papatipu rūnanga meeting the other night. Whenever a TRoNT meeting comes up, we have a pre – TRoNT hui with our papatipu rūnanga and there usually aren’t many people there and they always are the same reliable people. We talked about why that is. Is it a sense of apathy or a sense of feeling disconnected or feeling that the power and control has built up from the corporate over the years so what’s the point? I believe that all parts of the whole have a responsibility in creating opportunities so that whānau feel they can come up with their own solutions, have their say and ultimately take responsibility.

How does that tie in with your ideas about leadership?
It’s about partnering. I really like Mark Solomon’s concept of servant leadership. What is dynamic leadership? That is about being a partner so my vision is that in 25 years’ time, whānau will have ownership in designing and delivering their own solutions and Te Rūnanga will partner alongside.

At times I hear comments that are divisive and if you spend the time to unpack this, it is often symptomatic of an underlying cause which is mamae or pain oriented.

Wouldn’t our goal be to change from that deficit thinking to creating a culture that is filled with a sense of hope and aspiration? I have a feeling that young people will be attracted towards this.

I’m lucky to come into an environment where there are overarching strategies in place already. The 2025 strategy initially came from discussions with whānau, hapū and papatipu rūnanga. We have to keep revisiting and refreshing it and be open to change. We have to bring the korowai of wisdom and learning with us, open our minds to innovation and hear the voices of young people.