The return of the Spirits Bay honey brand was a dream come true for the Murray whānau – a decade after it passed out of their hands. Celebrated at an emotional ceremony earlier this year, the whānau came together with a delegation from Ngāi Tahu and its subsidiary, Oha Honey, who brought Spirits Bay home. Kaituhi Dean Nathan reports. 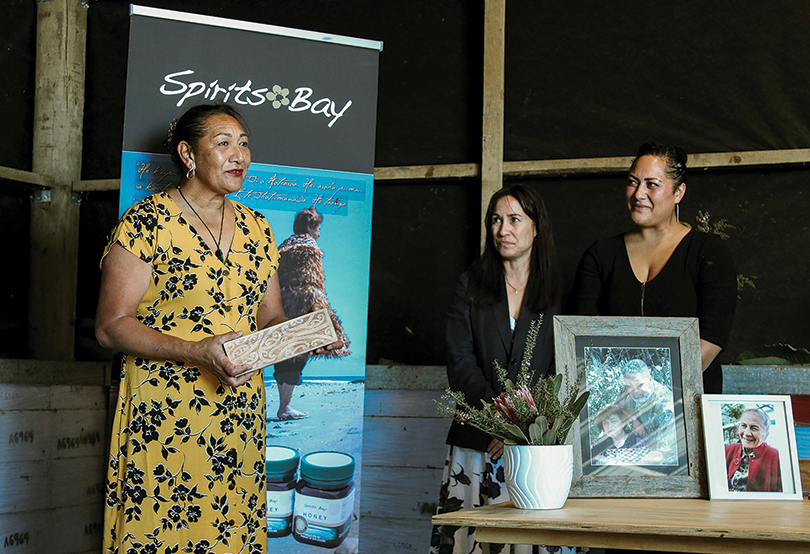 Above: Mata Murray (left) addressing the crowd as Nadine Tunley and daughter Blanche Morrogh watch on. Photos of loved ones passed including Rapine and Saana proudly adorn the table in foreground.

Mata Murray has recalled the sacrifice she and her husband Rapine made in the remote bushland of Kapowairua (Spirits Bay) to get their mānuka honey project off the ground.

“I realised that you can actually work up to 20 hours and go to sleep for four and do the whole thing again,” says Mata. “But I guess I enjoyed it at the same time – living the dream. My husband could see the dream and he kept me inspired.”

Rapine was the youngest son of the revered Ngāti Kurī elder Saana Murray, renowned for her leadership of the WAI262 treaty claim over intellectual property rights to traditional Māori knowledge of flora and fauna.

Saana was raised at Kapowairua in the early 1900s when the mānuka and kānuka trees had a wide range of uses, including building materials, immunity from insect bites and ailments, and using the leaves for tea. She recalled being taught by her father how to use mānuka (ti-tree) to smoke wild bees out from rocks and trees to harvest honey, later traded for flour and essentials.

Above: Manuhiri being welcomed.

Rapine saw the enormous potential and had the inspiration needed to realise his dream. In 2007, he and his business partner Denis Watson launched the Spirits Bay honey brand. Sadly, the dream was short-lived for Rapine. He died in 2010 and Denis retained the Spirits Bay brands, leaving the whānau to rebuild what their father started with their newly developed Kai Ora business.

Fast forward several years and Denis Watson was still producing and selling mānuka honey products through his company, Watson & Son. In late 2015 he entered a partnership with Ngāi Tahu Holdings, who went on to take full ownership of the business in 2017, rebranding it Oha Honey. It was only then that the whakapapa of Spirits Bay came to the attention of new chief executive Nadine Tunley.

“It’s pretty significant. I probably didn’t realise at the time just how significant it was for the Murray family,” she says.

“In reality for me, once I realised the importance of the brand to the whānau, it was obvious that the rightful place for it to be was here.” 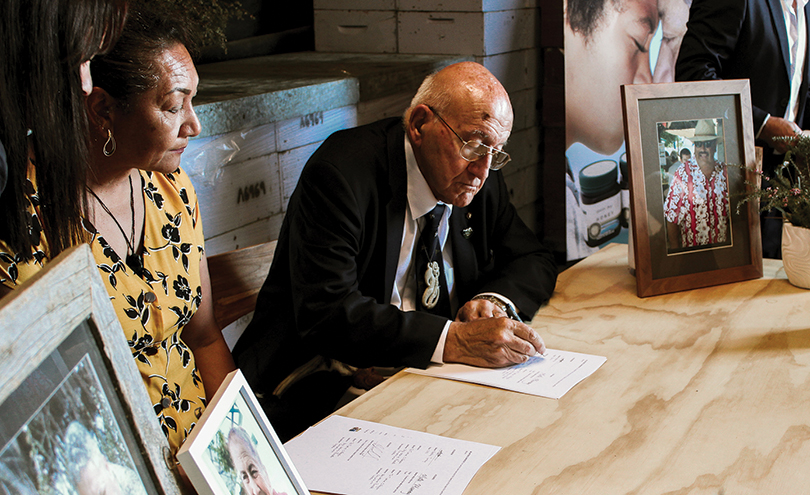 Nadine was part of a Ngāi Tahu contingent led by Tā Tipene and Lady Sandra O’Regan, who were warmly welcomed to the headquarters of Kai Ora Honey in Awanui in March. Befitting the occasion, the pack house was abuzz with honey bees and tension
in the air as Tā Tipene stood to address those gathered.

Tā Tipene explained that the rōpū from Ngāi Tahu had come to return the name that was part of the history of their newly-acquired company. He commended the outstanding leadership of Nadine Tunley in leading the process.

Loud applause followed the signing of documents to complete the transfer of the property ahead of Ngāi Tahu presenting the Murray whānau with a special vessel, named Te Whata Raumati, made of maire and pounamu for the safekeeping of their taonga. 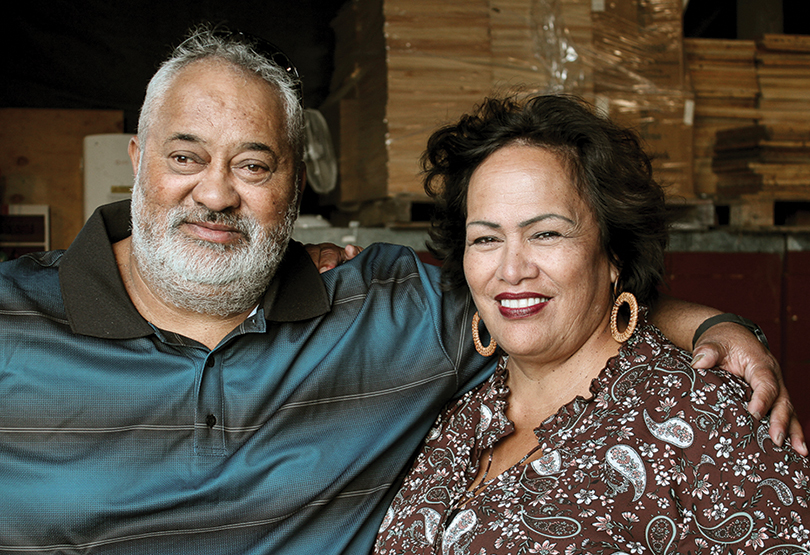 “Never in a million years would I have dreamed this would be returned,” said Mata.

“And to have it returned to us today. This sort of thing just doesn’t happen! It just doesn’t, and it did. Thank you, thank you.”

“For Ngāi Tahu, now that we own 100 per cent of the business, our desire is to work with all iwi groups if we can and make sure that we do that in a way that’s important to us and our values. It’s pretty simple really.”
Nadine Tunley Spirits Bay Chief Executive

Nadine and her team had been talking to Rapine’s daughter and managing director of Kai Ora Honey, Blanche Morrogh, for 18 months prior to this event. She reinforced her mother’s joy at the outcome.

“Thank you, Nadine, and everyone that’s turned up today to celebrate with us. It’s been over 15 years since Dad started Spirits Bay with our grandmother.

“Dad would say, ‘The bees are the way, honey is the way, mānuka honey!

“Looking back now, the courage that our father showed in a time of uncertainty has really brought us to where we are today. Because 10 years ago we lost this tohu and were left to start all over again. It is our honour to have it back. We cannot thank you enough. We are very blessed.” 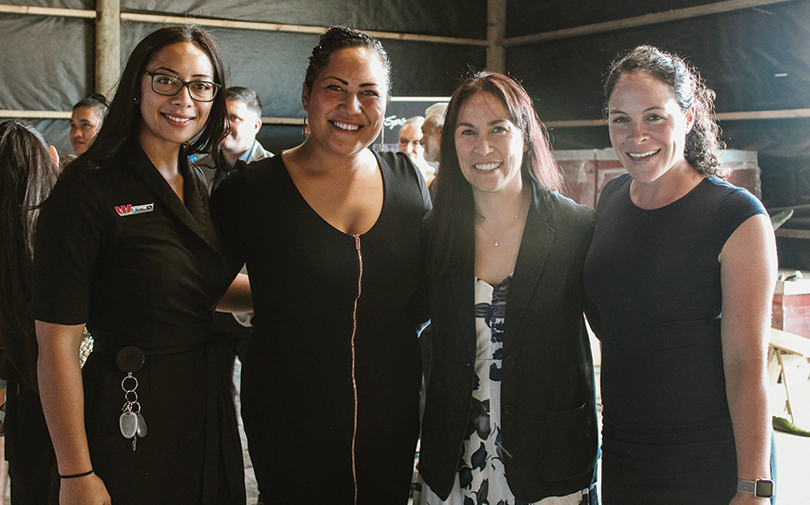 The ceremony brought closure for all parties along with a lesson on how the fledgling honey industry needs to do business in the future.

“It’s nice to finally sign it over and just to see the meaning for these guys is amazing,” said Nadine.

“This is a young industry that’s struggled. Some of that struggle has come about through a lack of understanding and everyone fighting for position. To do good business and especially for Māori, it’s best to do it with integrity and honesty and to live by values.

“For Ngāi Tahu, now that we own 100 per cent of the business, our desire is to work with all iwi groups if we can and make sure that we do that in a way that’s important to us and our values. It’s pretty simple really.”

In a play on words, Tā Tipene quipped about the ‘HOHA’ process that had just been completed in order for OHA honey to operate with integrity.

The whānau presented him with a shell of the native flax snail. The pupu harakeke is endemic to the far north and can be found at Kapowairua (Spirits Bay) where Rapine was laid to rest. His mother was buried next to him a year later. While neither lived to see their dream come to fruition, they continue to provide the inspiration that has brought Kai Ora Honey to where it is today. 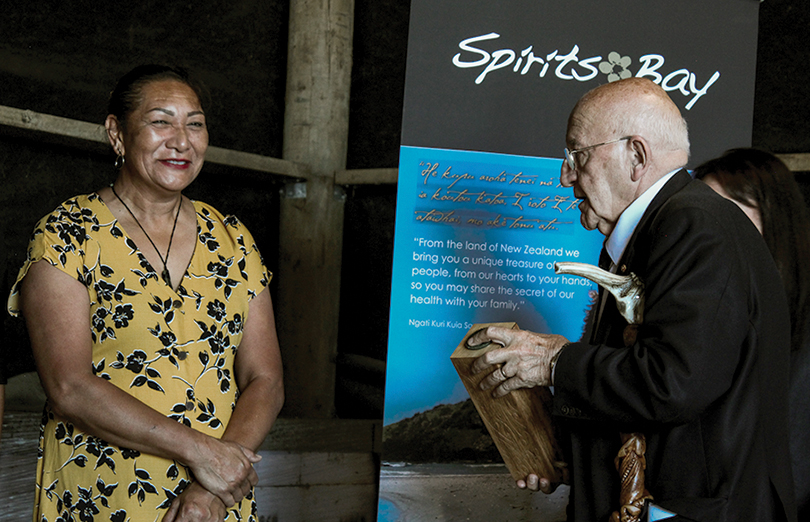 Blanche says: “It means a lot to us to have established a skincare range named after Nana (Saana). Hana Botanicals was her dream. Her first love was her skincare regime. And so it was only fitting that we named it after her because Hana also means to radiate and to be ambient and glow.

“It’s taken us from our little backdoor where we used to sell honey down the street to now selling it throughout New Zealand and overseas in Japan and Taiwan and the European Union through Romania and Germany. So it’s been an amazing ride.”

The return of the Spirits Bay honey brand is in effect the final realisation of a dream that began all those years ago.

“Today was quite overwhelming for my brothers and sisters and my mother,” says Blanche. “Spirits Bay is a very bright guiding light for us to build further success for our whānau here in Taitokerau. And now that we have it back there’s been so many different and amazing plans going through our minds.”