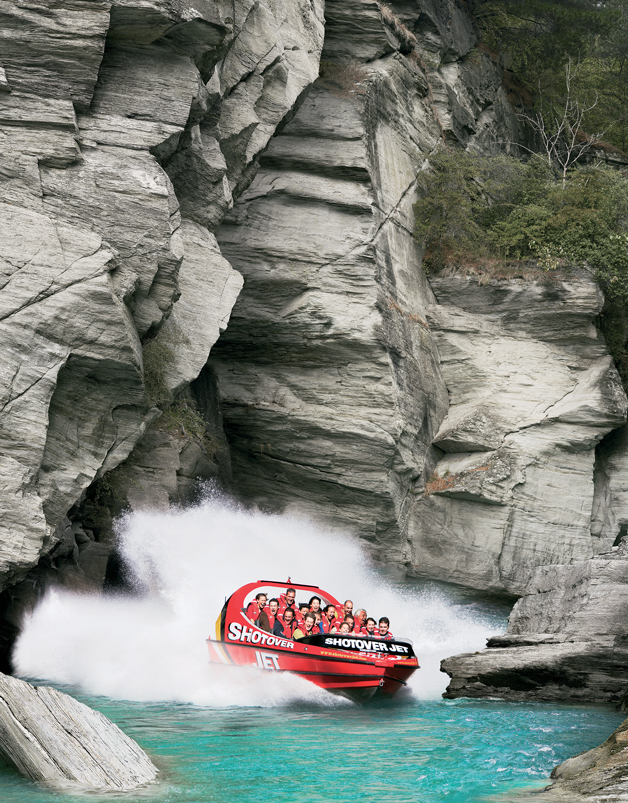 I still recall the middle-aged American’s line, a half-joke thrown into the wind as our boat flew down the Shotover Gorge at 85 kilometres an hour. “I think,” he said, “I just wet my pants.” I remember vividly, too, our driver, an ice-cool Slavic type in a black roll-neck and leather driving gloves, whose insouciant demeanour spoke of either competence or recklessness, depending on how you felt about being driven within centimetres of the canyon rocks. It was the beginning of the 1980s, I was 12, and the Shotover Jet was the single most electrifying thing I’d experienced.

Queenstown’s pioneering jetboat attraction turns 50 this year. What started in 1965 as a gentle sightseeing operation has become an internationally famous adventure tourism experience that has thrilled more than three million people, including royalty. For the last decade or so, it has been solely owned by Ngāi Tahu Tourism, which has invested heavily in maintaining Shotover Jet’s status as one of New Zealand’s top tourism drawcards.

Tā Tipene O’Regan was chair of Ngāi Tahu Holdings Corporation in 1999 when the company bought an initial stake in the Queenstown business.

“We were looking for a way to enter the tourism sector,” he says. “We’d already made a tentative start with Whale Watch Kaikōura, and we were looking for another attraction that might be described as ‘iconic’. We needed a presence, a footprint, because the bulk of the tourism industry was dedicated to locking us out – they don’t say that now, but they were.”

The preference was to acquire an established operation rather than start something from scratch. “Here was a business that was working well, with good people involved. We could move in, keep it going, and learn some of the operational skills.”

The majority owner in 1999 was Jim Boult, who two years later would sell his shareholding to Ngāi Tahu. Boult, recently named as an Officer of the New Zealand Order of Merit for his services to tourism, had bought the Shotover Jet in 1986, after he and his wife Karen took a holiday in Queenstown and fell hard for the place.

“The adventure tourism industry was still in its infancy at the time,” says Boult, who bought out Trevor Gamble, the owner since 1970. “In 1986, the business had three jet boats, a couple of vans and caravans on the riverside, and it carried about 35,000 passengers a year. By the time I sold it, we were carrying 120,000 passengers a year, had the lovely base buildings that we developed at the river, and a long-term concession. And we’d made the business into an icon of the tourism industry.”

Marketing was crucial to the transformation. Boult, a former merchant banker, developed the tagline, still used today, that Shotover Jet was the only operator permitted to use the gorge section of the “world famous” Shotover.

“When I took the business over they were selling a jet boat ride,” Boult says. “We changed that. We made it about selling a life experience.”

There were lowlights. The death of a Japanese tourist in 1999, after a steering component failed, resulted in three separate investigations, and rocked the company.

“Staff morale was damaged. Here we were running this fabulous business, yet somebody was killed.” He describes the incident as “focusing” and says it was a motivating factor for the company to develop new twin-engine boats.

He notes, however, that one fatality among millions of passenger trips doesn’t indicate that the operation was dangerous. Far from it: the essence of Shotover Jet’s appeal is that there is always a frisson of fear without great risk. “It’s that perception of danger, without anyone actually being in danger.”

By the time Ngāi Tahu came on the scene, Boult had been running Shotover Jet for 13 years, a taxing spell given the 365-days-a-year nature of the operation. He stayed on for two more years as managing director. What did his new iwi partners bring to the business?

“The investment secured our presence in the New Zealand tourism market. Shotover Jet is not just a local thing – it’s all over New Zealand’s branding.”
Tā Tipene O’Regan

“But it was a lovely learning curve for both sides, I think. They picked up some tourism knowledge from us, we learned lots from them. They were just a natural fit for the business, and it was a very amicable relationship. Looking back, I see that a number of the employees who were around in my time are still with the company, which demonstrates that they were comfortable with the new shareholder too.”

Boult sold in 2001, and by 2004 Ngāi Tahu was sole owner and had delisted the company, which, in addition to the Shotover Jet business, included jetboat operations on Te Awa Whakatipu (the Dart River)) and the Waikato, Huka Jet in Taupō, as well as Rainbow Springs and the Rainbow Farm Show in Rotorua.

Tā Tipene says in some ways the Shotover Jet was an anomaly for the iwi, whose fundamental interest in tourism is about getting control of the interpretation of its culture.

“We wanted command of what was being said about us, our place names, our heritage, which meant we had to be a player in tourism. The more obvious territory for us to get involved in is something like the Hollyford Track, or Dart River Jet Safaris, where we can have a big block of cultural content, and where we have particular skills, advantages, and interests that other operators don’t. So in that sense the Shotover Jet is an odd thing for us. But the investment secured our presence in the New Zealand tourism market. Shotover Jet is not just a local thing – it’s all over New Zealand’s branding.”

Ngāi Tahu has invested significant capital to grow the business. Between 2001 and 2004, the entire fleet was replaced with seven “Shotover Twins” – twin-engine boats, each capable of carrying 14 passengers. Three years ago, the company rolled out a fifth-generation prototype boat that included improved safety and comfort features and a boost in engine power.

“It’s a very good operation,” says Tā Tipene. “We’ve refined it, developed the offering, and it’s got better and better.”

There have been a couple of troubling incidents. Last October a boat clipped a canyon wall, and in January five passengers were injured when another boat hit a rock at the entrance to the second gorge. An investigation found driver error to blame for the more serious accident.

Those moments aside it’s been a happy investment for Ngāi Tahu. Shotover Jet has won several major tourism awards, including being named New Zealand’s top adventure activity two years in a row, and serves as an important “shop window” for the iwi’s tourism arm, not least last year when Kate and William Windsor’s Shotover ride received international coverage.

Boult, who chairs the Government’s Tourism Growth Partnership and recently became a director of Real Journeys, says Ngāi Tahu has grown and improved the operation. In the year it turns 50, Shotover Jet is in good hands. “They’re excellent custodians of an excellent business.”

The brothers sell to employee Herm Palmer. Passenger numbers climb to around 3300 per year.

Trevor Gamble buys the operation and renames it Shotover Jet. Using boats capable of carrying five passengers, later upgraded to nine-seaters, Gamble transforms what had been a leisurely boat ride into a high-speed adventure activity.

Jim Boult and Armada Holdings Ltd buy out Gamble. They convert the fleet to new motors and LPG fuel. By year’s end,
a new milestone is achieved: 500,000 passengers.

For safety reasons, the Shotover River Empowering Act awards the company the sole concession to operate in the
Shotover River Canyons.

For the first time, the operation carries more than 100,000 passengers in a year.

Ngāi Tahu Holdings purchases a stake in the company. Two years later it buys out Jim Boult and others
to achieve 88 per cent ownership.

First of a new “Shotover Twins” fleet is introduced.
The seven boats have twin engines and carry 14 passengers.

Ngāi Tahu acquires 100 per cent of Shotover Jet and delists the company.
At the New Zealand Tourism Awards, Shotover Jet wins the major category
of Visitor Activities and Attractions, and is named the country’s
top Adventure Activity. The latter award is won again in 2005.

A “fifth generation” prototype boat is launched.
It is touted as a big step forward in power,
maneuverability and customer experience.