A journey of ambition

Earlier this year, Ngāi Tahu Holdings announced its investment in GreenMount Advisory, a firm specialising in the complex field of private equity, family office, and corporate mergers and acquisitions. GreenMount founder and executive chairman Ryan Davis says the partnership seems like a natural fit as he had always known his career would ultimately lead him to work for his iwi. He speaks to kaituhi Anna Brankin about the upbringing and mentorship that led to his successful accounting career and in turn the establishment of GreenMount. 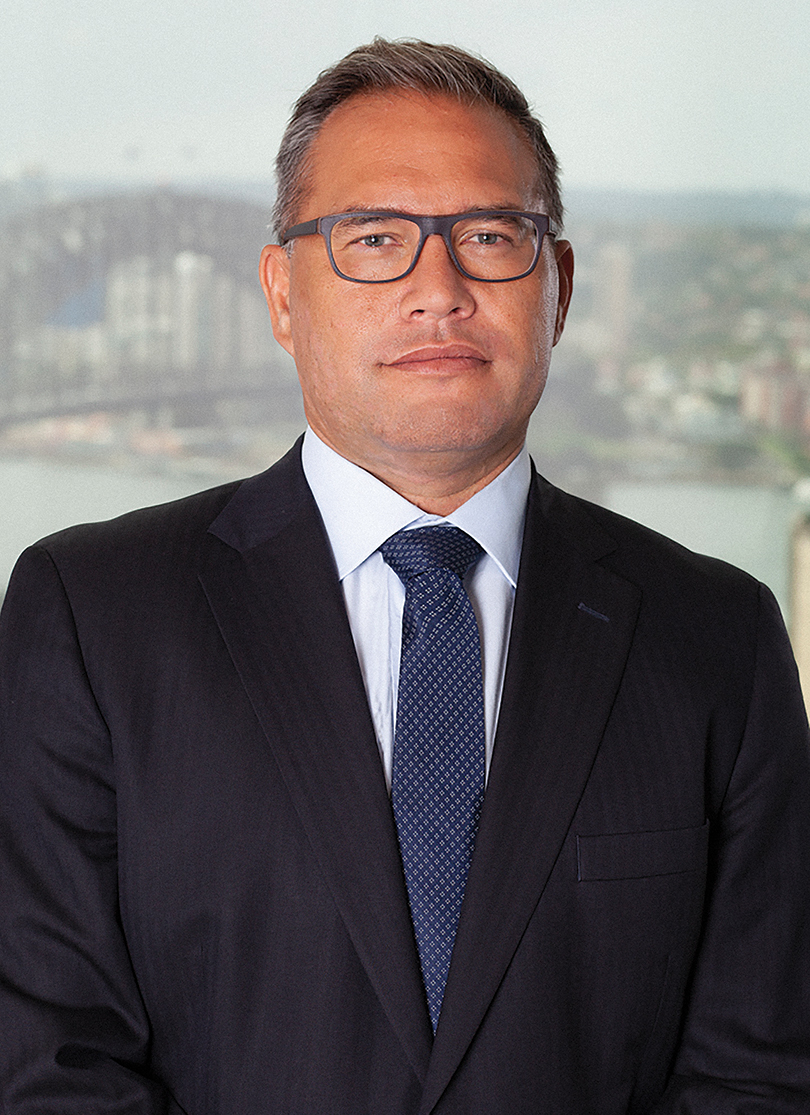 “Burning ambition” and “family-focused” are two characteristics that might seem diametrically opposed, but Ryan Davis (Kāi Tahu, Kāti Māmoe, Waitaha, Ngāti Kahungunu, Rongomaiwahine, Ngāpuhi) not only uses both terms to describe himself, he attributes his remarkable success to the way these two traits work together.

When asked to describe himself, the first thing Ryan mentions is his four children: Olivia-James (21), Ngaru (15), Joe (6) and Zeta-Jane (3). The second thing is the incredibly strong whānau ties that have played a significant role throughout his life.

“My family focus came to me particularly through being brought up in part by my grandparents Wiremu and Jane Davis,” Ryan says. Born in Murihiku, Ryan spent his early years in Dunedin with his mother Huhana Mete and stepfather Graham Carse, and later lived in Queenstown with his father Rewi Davis and stepmother Annalise Davis. “I also have a very big family of siblings, Lisa Carse, the late Danny Carse, Richard Christie, Charlotte Christie, Waimarie Mete, Jana Davis and Ariana Davis,” Ryan says.

“I used to catch the Southerner down to Invercargill and visit Nana and Grandad a lot,” Ryan recalls. “I went to the Tītī Islands pretty much year on year with them, as well as my Aunty Karina and Dad. I also spent a lot of time with my Grandad on fishing boats, and I remember going to the early [Ngāi Tahu Māori] Trust Board meetings with Nana and Grandad.”

“The overarching thing we’ve thought about as a business is providing care and attention – to our families, to our staff and to our clients. Trust, respect, loyalty, accountability, collaboration and resilence are very powerful values that have been instilled in me throughout my personal and professional life including by Nana and Grandad.”

Wiremu (Bill) and Aunty Jane Davis are well-known throughout the iwi for their tireless efforts on behalf of Ngāi Tahu, and it is no surprise that under their influence Ryan developed a strong work ethic and an unwavering dedication to his immediate whānau. In fact, he was spoilt for choice when it came to role models, acknowledging that his aunties Karina and Leanda and uncles Tane and the late Patu also played an important role in his development. These relationships have endured, and Tane in particular has been a strong presence in Ryan’s life since his Nana Jane passed away in 2019.

“My father Rewi and my mother Huhana have both been a massive influence in my professional life, in terms of working hard and being a self-starter,” Ryan says. “Dad started out on fishing boats in Bluff and went on to have a global career and was very successful in his field. I always admired that, and I moulded myself on him and my grandmother, Janie.” 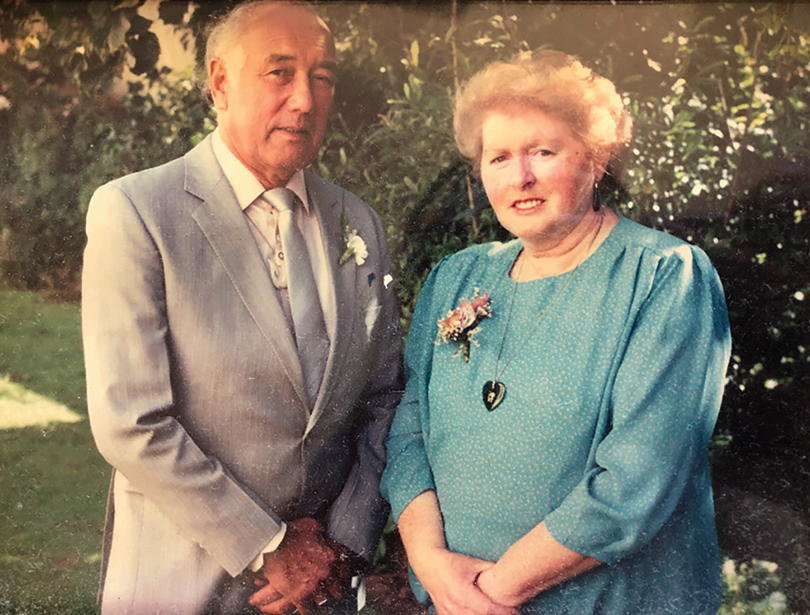 Above: Ryan’s Nana and Grandad, Janie and Wiremu Davis.

The seeds of his success may have been sown in his childhood, but as Ryan tells it, it’s something of a happy accident that he became an accountant at all. After spending a couple of years working and travelling, he followed his girlfriend at the time to the University of Otago. “I’d always been good at maths, so I took all commerce subjects, and my strategy was that I would major in the subject I got the highest marks in at the end of my first year, with no more thought than that,” he laughs. “As fate would have it, my highest marks were in accounting.”

After graduating with a Bachelor of Commerce, majoring in accounting, Ryan knew he needed to look further afield for the sort of role he wanted. He cut off his long surfer’s hair, Rewi bought him a suit, and Ryan drove the length of the country to Auckland in the Holden HZ ute he’d inherited from his father.

It wasn’t long before he secured his first position at Brown Woolley Graham (now Grant Thornton). “I worked there for two-and-a-half years – it was a great firm, with great people, great culture,” he says. “Eventually, I wanted to step up into one of the big four global accounting firms.”

Ryan sought a job with EY in 1998 and began working in its corporate tax group. His work there led to an opportunity with PwC that included relocating to Sydney for a two-year contract.

“I left Auckland for Sydney in 2001, which became a major turning point in my career,” Ryan says. “I fell on my feet by luck as much as anything, and joined a team in Sydney that at the time was the best in its field [international tax, mergers and acquisitions] across Australia and New Zealand.”

A two-year contract quickly became permanent, and Ryan’s career expanded to include private equity and investment. He remained at PwC until 2007, when he was approached by KPMG to make partner at the relatively young age of 32. This offer included the opportunity to build a private equity tax practice from scratch. “That ticked a lot of boxes for me and my personality as a self-starter who likes a challenge.”

Four years later, EY asked Ryan to return as a partner, offering him the same blank sheet of paper. “This time, I challenged my boss at the time, Ian Scott, to think global,” he says. “I took the same strategy I’d developed at KPMG, overlaid the EY systems and broadened it across Asia-Pacific. Personally and professionally that was a very satisfying role and I stayed there until I founded GreenMount. With EY I travelled the world, spending a lot of time in Shanghai, Beijing, Hong Kong, Singapore, Seoul, New York, San Francisco and Dallas. That was where the global mindset I inherited from my dad came into play.”

When Ryan reflects on his career trajectory, he says he was driven by more than personal ambition. “Stepping back, one of the things I’ve been proudest of was being a young Māori in a predominantly Pākehā business world,” he says. “For a long time I was the only Māori professional in the firms I was working in. When I moved back to EY I came across the first Māori partner I’d met, who just so happened to be the now famous Sir Rob McLeod, the then CEO of EY. He became a close mentor, and later we both supported the promotion of a third Māori partner. I’ve always been very proud of that.” 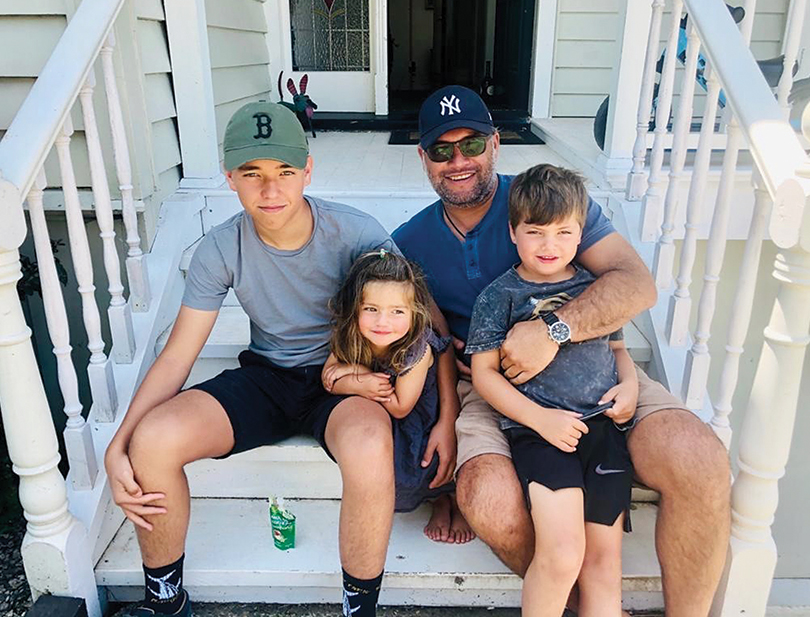 During his time working for PwC, KPMG and EY, Ryan realised there was a niche opportunity to create an independent firm that disrupts the current big four operating model – and in 2018 GreenMount was born. “We are an independent boutique advisory firm focused on transactions, effectively turning the big four operating model into something leaner and much more efficient,” he says. “We can be a lot faster and more agile, and our aim is to hire the best talent given our values, culture and remuneration model – i.e. our overheads are lower and therefore our shareholders and staff get a bigger piece of the pie.” Drawing on his passion for sport, Ryan uses a rugby analogy to explain how GreenMount operates. “The big four are like Super 14 Rugby teams, and GreenMount is the All Blacks,” he says. “Clients come to GreenMount to use the best talent, and where it makes sense GreenMount sources that talent inhouse or from within each of the big four firms to form a virtual team.”

When asked about the origins of the name GreenMount, Ryan has a ready answer. “That’s an easy one – because of this,” he says, placing a hand on the pounamu around his neck. “My mother gave me this taonga when I was 21 and I’ve pretty much never taken it off.”
“Green means growth, it reminds me of my taonga, of walking in the Tītī Islands with the ferns. Mount – that reminds me of Milford. It’s power, strength, and foundation.”

From the outset Ryan knew that the organisational values and culture would be the key to GreenMount’s success. “The overarching thing we’ve thought about as a business is providing care and attention – to our families, to our staff and to our clients,” he says. “Trust, respect, loyalty, accountability, collaboration and resilence are very powerful values that have been instilled in me throughout my personal and professional life including by Nana and Grandad.”

When asked about the origins of the name GreenMount, Ryan has a ready answer. “That’s an easy one – because of this,” he says, placing a hand on the pounamu around his neck. “My mother gave me this taonga when I was 21 and I’ve pretty much never taken it off.”

When thinking about developing a global brand, Ryan’s first thought was simply: Greenstone. When he discovered the domain name was already taken, he quickly put his thinking cap on and came up with GreenMount. “Green means growth, it reminds me of my taonga, of walking in the Tītī Islands with the ferns. Mount – that reminds me of Milford. It’s power, strength, and foundation.” 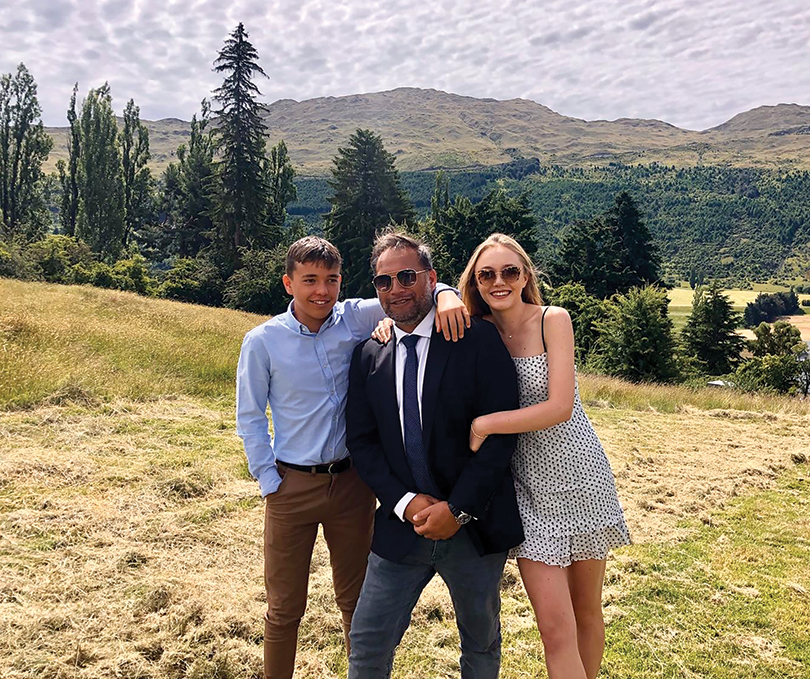 Above: Ryan with his two older children, Ngaru and Olivia-James.

GreenMount has been slowly and steadily growing its foundation over the past two years, becoming an attractive investment opportunity for Ngāi Tahu Holdings. The idea was first suggested by Ngāi Tahu Holdings chair Mark Tume after a chance meeting with Ryan during a transaction last year.

“I was keen to partner up because I’m naturally aligned to my whānau and my iwi, and I like the idea that when I make returns, the iwi makes a return too,” Ryan says. “I didn’t necessarily want to sell my business so soon, but the timing seemed right given my growth ambitions.”

The partnership with Ngāi Tahu Holdings has fast-tracked GreenMount’s expansion into Aotearoa. “It’s a funny story actually – I came to New Zealand on 11 March this year with a carry-on suitcase and my surfboards,” says Ryan. “I was expecting to be away from Sydney for a week, for a meeting with Ngāi Tahu Holdings and then a visit to my two youngest children in Raglan.”

When the nationwide lockdown was announced, Ryan made the decision to stay in Aotearoa to support his two youngest children and their mother Anna Le Quesne – and he’s been here since. Although unplanned, and although it has meant a separation from his two older children in Sydney, this prolonged stay became particularly poignant when Ryan’s younger brother Danny passed away abruptly in July. “If I’d been in Sydney I wouldn’t have been able to go to his tangi,” Ryan reflects. “I feel very lucky to have been here to say my goodbyes.”

As well as spending time in the South Island with his friends and whānau, and in Mahia and Raglan in the North Island, Ryan has been able to open and staff the Auckland branch of GreenMount and finalise the deal with Ngāi Tahu Capital. In the meantime, the GreenMount Sydney office has continued to hum, as Ryan’s fledgling business spreads its wings and begins to soar.