A Master Stroke: Creating the next generation of Māori leaders

Nearly 130 years after Tā Apirana Ngata of Ngāti Porou became its first Māori graduate, the University of Canterbury is achieving success in being the first tertiary institution in the country to offer a Master of Māori and Indigenous Leadership (MMIL) degree. The two-year degree is the brainchild of senior lecturer and Head of School – Aotahi/Māui School of Māori and Indigenous Studies, Sacha McMeeking (Kāi Tahu – Waihao). It is an applied professional programme dedicated to supporting the advancement of Māori and indigenous self-determination, and more importantly, says Sacha, it is an idea whose time has come. Kaituhi KIM VICTORIA reports. 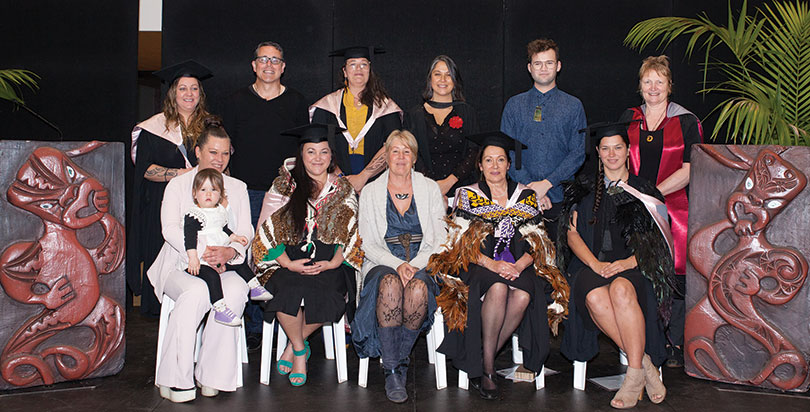 “The time has never been more right for this programme,” Sacha McMeeking says. “There is a huge belief within Māori communities that we have the greatest, most conducive context to realising self-determination since prior to the Treaty.”

However, she says the main barriers for realising those aspirations of self-determination are the courage and aspirations of Māori. “We need to grow the courage of heart and the perception of what is possible amongst members of our community.”

Aimed at Māori who are mid-career and working within their communities, MMIL is a broad two-year programme that seeks to understand the culture, knowledge, and philosophies of Māori and indigenous peoples and their economic, political, and social realities. “This programme is about creating a connected cohort of Māori who are going to be responsible for the next step change in Māori self-determination,” Sacha says.

“In 20 years time, the legacy of this programme will be a generation of Māori able to achieve transformative change within their own communities, being connected enough to contribute to systemic change in New Zealand, and also connected internationally to build our relationships with indigenous peoples globally.”

While the course is about inspiring leaders, it was that impression that almost turned Christchurch researcher Kari Moana Kururangi (Ngāi Tahu, Waitaha, Kāti Māmoe) off applying to study the MMIL programme. She has since graduated with Distinction. The course emphasis on leadership was one she initially found difficult to relate to, as she didn’t see herself as a leader.

“It’s a very cultural thing to be humble. We have a whakataukī – kāore te kūmara e kōrero mō tōna ake reka – the kūmara does not speak of its sweetness. I was reluctant to own that role.” Kari says all that changed as she matured through the programme and began to understand the role and responsibilities placed on the students. “It was an amazing opportunity for personal growth,” she says.

Kari, who also holds a law degree and a Bachelor of Arts (te reo Māori) from the University of Canterbury and a Bachelor of Teaching (immersion) from Te Whare Wānanga o Raukawa, says her journey onto the course actually began after a kitchen table discussion more than 10 years ago. “We were talking about the state of education in New Zealand, and began to dream about the solution – re-creating ‘education’ as we know it.”

The dream became reality with the establishment of a new Māori medium school in Linwood, Christchurch – Te Pā o Rākaihautū – a unique 21st century pā wānanga (learning village) committed to educational success for the whole whānau, from early childhood, primary, and secondary schooling, right through to tertiary education, on the one site. Kari has been working on a dual-language programme for the school.

“Our education system in New Zealand is failing our tamariki. Data shows that students engaged in Māori medium education have better achievement rates, and are more likely to stay in school longer, when compared to Māori students in mainstream schools. And yet the fact remains that the vast majority of Māori are still engaged in mainstream education.

“I knew that if we achieved success with our model of dual-language provision it could have the potential to be replicated elsewhere, which would provide more choice for families and grow Māori medium education in New Zealand.”

Kari incorporated her work with Te Pā o Rākaihautū into her research project as part of the MMIL. “Te Reo Māori is my passion. So this programme gave me the opportunity to merge my love of education with my love of language. It was the perfect kaupapa for me.” 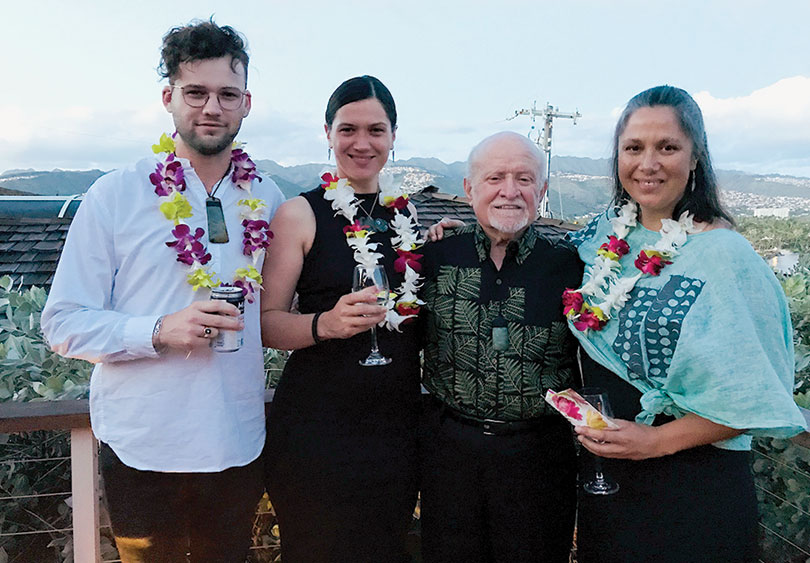 The MMIL course includes an overseas component where students are paired with the programme’s international partners, the First Alaskans Institute (FAI), and Americans for Indian Opportunity (AIO), as part of the latter organisation’s Ambassadors Programme.

MMIL Programme Co-ordinator William Grant (Kāi Tahu, Ngāti Porou) says every effort is made to pair up Kiwi students with mid-career Native American professionals who are doing similar work within indigenous communities in the United States. The group visited First Alaskans in Anchorage, Alaska where Kari was able to spend time with Cordelia Qiġñaaq Kellie, who was also researching language development in her community.

“This opportunity has created enduring relationships,” Kari says. “In fact, we will be hosting our FAI family when they visit New Zealand this year.

“We didn’t just visit, take, and leave. This was about reciprocal knowledge, sharing, and the chance to grow and learn together. All indigenous peoples have similarities in our narratives, despite the differences in our everyday realities.

“We may be in different places on the timeline of resistance, resurgence, and revitalisation; but there is still so much that we can learn from each other. After all, we are all working towards the same goal – the survival and prosperity of our people.”

But while the international relationships are important, Sacha McMeeking cautions that Māori shouldn’t aspire to replicate anyone else’s interpretation of self-determination.

“What matters is to establish our own version of self-determination and what is possible. The MMIL involves international travel so students can do some comparative study, but then they sit down and engage with First Nation leaders in North America. Being able to go on the reservation where nations have law-making power, where they have their own courts, their own police system, it is really helpful; and challenges our assumptions about what’s possible in New Zealand.”

The first cohort of the Master of Māori and Indigenous Leadership (MMIL) graduated at the end of last year. Sacha says the only real challenge the university has faced is the unexpected demand for places on the programme. In the first year there was a cohort of 15, the following year it was 30, and this year, more than 60 people have applied. 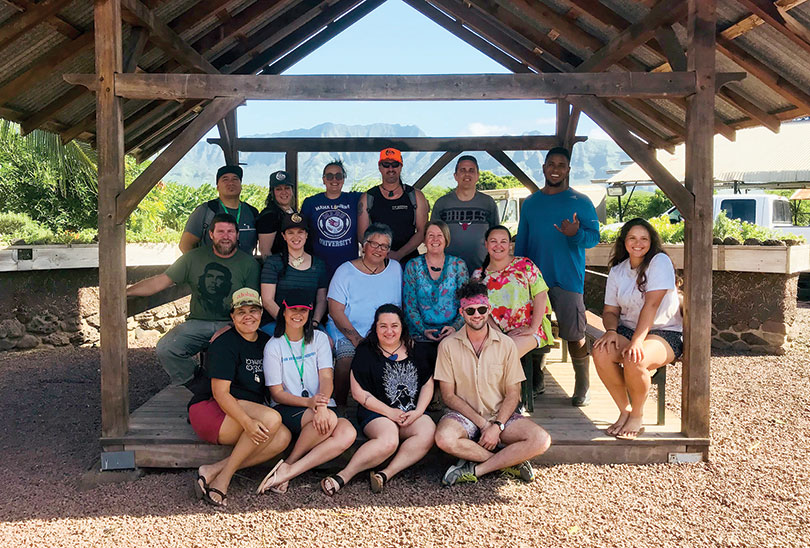 Above: MMIL students in Hawai’i.

For Kari, part of the appeal of the course was the calibre of lecturers, including former chief executive of Te Wānanga o Aotearoa Bentham Ohia, the lead lecturer of the MMIL programme for the last two years. Bentham was recently appointed Chief Advisor of Māori Iwi Relations at the Ministry of Education. He echoes Sacha when he explains the purpose of the programme.

“Ultimately, we want to create the next generation of Māori leaders, from across iwi, Māori and government sectors, and to foster international indigenous relationships around a cohort of Māori leaders,” says Bentham.

Sacha says it’s really easy 20 years later to forget that before the negotiators created the Ngāi Tahu settlement, there was no template for Treaty settlements in New Zealand. “And before Dame Tariana Turia made Whānau Ora, there were no templates for Whānau Ora. So we have a really important legacy of people who have made first-of-kind innovations to serve the aspirations of our community, and now we need this generation who are just stepping into those roles where they have resources to do that.

“It’s these leaders who will create the next economic model for Māori development, the next version of Whānau Ora, the next model, the next innovation. MMIL creates a network of connected leaders who are supported to make bigger, bolder contributions to the community,” says Sacha.

Sacha believes those big, bold contributions will focus on problem-solving and solution-building within Māori communities.

“Being critical of the status quo is easy and comfortable. We fall into pathological problem definition, and that does not fix anything. To create change and build anew takes a lot of things. It takes courage, interpersonal skills, negotiating skills – solution building takes all of those things.”

Growth, leadership, personal transformation, and nurturing within a whānau-based environment heavily underline the two years study that MMIL entails. “We were given space to grow,” says Kari. “It allowed us to own our roles, as leaders in our communities.

“It’s been a humbling experience to sit back and reflect on the change that this programme has made in us, and in our communities. I will be forever grateful for this opportunity.”