Officially opened by the Minister of Māori Development, Willie Jackson (Ngāti Maniapoto, Ngāti Porou), on May 12, the apartments are the realisation of a 10-year dream for Rehua whānau, and for Willie Jackson they act as an exemplar of what the government is trying to achieve in terms of new papakāinga housing developments. Kaituhi Adrienne Rewi reports.

“These six new apartments are a fine example of what is needed around Aotearoa,” says Willie Jackson.

“This might be a small development but it is proof of what can happen when mana whenua and the marae community work together. It’s a wonderful kaupapa and it’s an honour for Te Puni Kōkiri to be here to cut the official ribbon.” 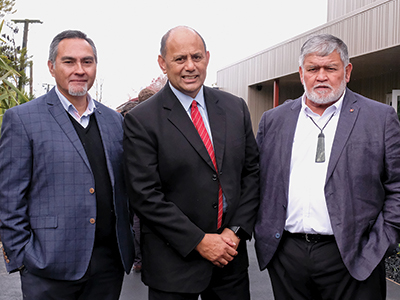 “After sitting largely idle since the closure of the Māori Trades Training Scheme in the late1980s, the old hostel now has a new life. It’s the start of a new chapter for Rehua,” he says.

“I’d like to acknowledge both mana whenua, Ngāi Tūāhuriri, for their korowai of aroha and manaaki that keeps Rehua and its manuhiri protected and nurtured, and the founding kaumātua of Rehua, to whom we owe a debt of gratitude and thanks for their foresight in establishing the marae.

“We hope the apartments will bring whānau back to the marae and by encouraging them to participate in marae events, we’ll amplify the overall health of Rehua.”

For mana whenua spokesperson Dame Aroha Reriti Crofts CBE (Ngāi Tahu – Ngāi Tūāhuriri), the apartments signal an exciting new direction for Rehua. Keeping the name of Te Koti Te Rato alive is an acknowledgement of tīpuna and the contribution they have made.

“It’s part of our whakapapa, a part of the longstanding relationship between Ngāi Tūāhuriri and Rehua, and it’s important his name is there,” she says.

“The new development is now a living kāinga that acknowledges our tīpuna. We have the kaumātua flats at the rear of the marae and now, in the apartments, we have new tenants of all ages. That’s part and parcel of papakāinga life and I’m very proud of the Rehua board and all those who were involved in developing the new apartments.” 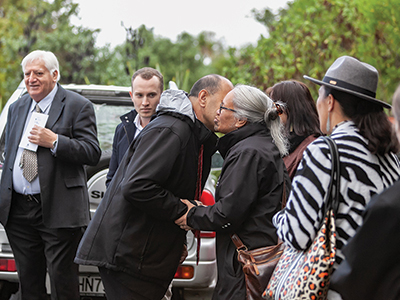 Manuhiri being welcomed as they gather to celebrate the opening of the newly completed apartments.
PHOTOGRAPH: Mihiata Albury.

David says the apartment building will contribute not only to the economic sustainability of Rehua, but will also improve the social, cultural and environmental wellbeing of the Māori community.

“Community is at the heart of Rehua Marae and this style of living will allow whānau to be on urban marae grounds and engage in a wide variety of marae activities,” he says.

In 2011, after the earthquakes, and with the support of Te Puni Kōkiri, the Rehua Trust Board developed a marae development plan and whānau housing was identified as a priority. Increasing whānau participation at the marae was a No.1 priority.

Te Puni Kōkiri has had a longstanding relationship with Te Whatu Manawa Māoritanga o Rehua and committed $2.4 million to the project. The Marae Trust committed a further $400,000, a Department of Internal Affairs Lottery Grant provided $350,000, and the Rātā Foundation, $200,000. 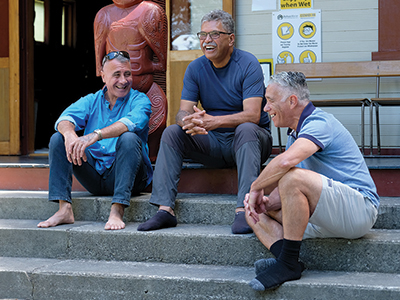 The repurposed building houses two 2-bedroom, two 1-bedroom and two 1-bed studio apartments, with a common area on the ground floor to be used for wrap-around services including whānau rooms, nurses’ clinic, offices and rongoā services, available for Rehua whānau. Whānau of mixed ages can rent apartments at 70 percent of market rate.

Designed by architects WSP Christchurch (Opus International), and built by Simon Construction (Simon whānau, Wairewa), the project has largly been driven by Māori businesses. “That’s been critical for us,” says David. He is also eager to see the new apartments continuing the tradition of wrap-around care and service.

“We wanted to create a comfortable, supportive environment for whānau who want to reconnect with the marae. It’s been a well-planned, well-managed, on-time and on-budget project and we’re excited about its future,” he says.

Catherine Stuart (Ngāi Tahu), is also happy that – over 150 years after he arrived at Rāpaki – Te Koti Te Rato and his fine achievements will live on.

Catherine, a Rehua Marae board member and the great-great-granddaughter of Te Koti Te Rato (Ngāti Kahungunu) and his wife, Irihāpeti (Ngāi Tahu – Ngāi Tūahuriri, Ngāti Wheke), says the gifting of his name to the Māori Trades Training Hostel in 1966 – and now carried over to the modern apartments built within the old hostel – is testament to the respect and esteem he was held in during the 30 years he spent based at Rāpaki; she is proud his name and achievements will continue to be recognised. 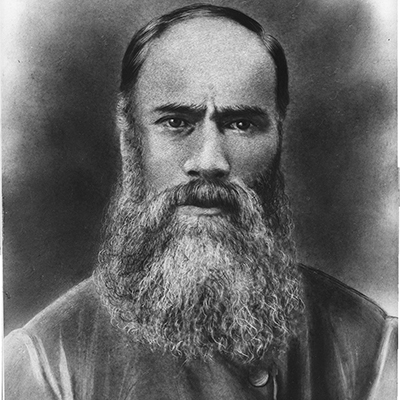 Wiremu Te Koti Te Rato was born in the Wairarapa around 1820. He entered the Wesleyan Native Institute at Three Kings in Auckland in 1854, and after time spent as a missionary in the Chatham Islands (1859-1863), arrived at Rāpaki where, on his marriage to Irihāpeti in 1864, was gifted 20 acres near the current church to live on.

Catherine is today the proud caretaker of a copy of the extensive records of all Ngāi Tahu births, deaths and marriages that Te Koti Te Rato compiled, as he travelled widely on horseback throughout Te Waipounamu.

He was prominant in Rāpaki affairs, often speaking at formal occasions, and played a big part in church and iwi affairs in Canterbury and Otago. His position and mana made him an essential participant in any event involving Māori interests.

It was in honour of that contribution that the new hostel of 1966 was gifted the name, Te Koti Te Rato, by Catherine’s grandmother, Hinerua Couch (née Riwai) and her sister, Kiato Riwai of Rāpaki and Wharekauri.

“The Couch and Riwai whānau were great supporters during the establishment of Rehua Marae and they gifted the name of their tipuna to this building because of his significant and lasting legacy through his service to the church and Māori of Te Waipounamu,”
she says.

“It is an honour for us that he ‘lives on’ in this new building. Given where Te Koti Te Rato came from and how he spread the faith of the Wesleyan Church throughout the South Island, I think he would also be honoured to know his deeds continue to be acknowledged today.” 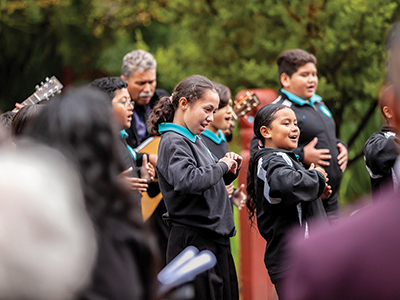 Tamariki from Te Kura Whakapūmau performing a haka at the opening of the new apartments.
PHOTOGRAPH: Mihiata Albury.

“There’s such a warm, inviting feeling to the building and it has a very uplifting wairua. I’m sure kaumātua in particular are going to feel very safe and comfortable here,” she says. Kylie is onsite two-and-a-half days a week offering a range of services including health checks and health education to kaumātua, apartment tenants and the wider Rehua whānau and community.

She says being close to the marae will mean a lot to the Rehua whānau. “We’ve waited so long to be back in Te Koti Te Rato and it’s such a welcoming environment to return to. Plus we all have history with this building, so that makes it even more special.”

The continuation of history is also important for mana whenua. The strong connection between Rehua and Ngāi Tūāhuriri goes back a long way and this new building bearing the name Te Koti Te Rato acknowledges the contribution he made to the iwi and to South Island Māori. Now his descendants are layering on another generation of experience. 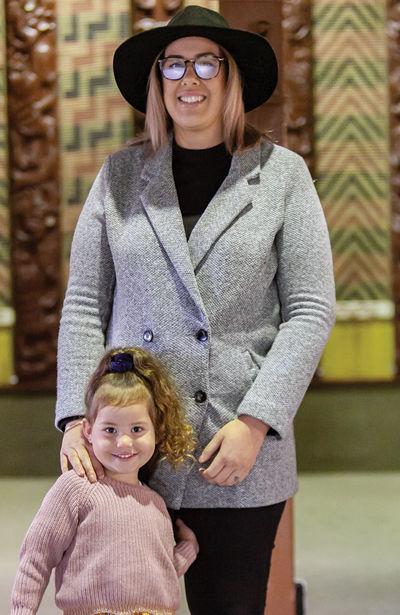 Taylor Tuhaka, pictured here with her youngest daughter, Harper Tuhaka (3) is excited about the possibilities for her children once they have settled into one of the two-bedroom apartments in Te Koti Te Rato.

“Seeing Kiara (5) and Harper integrating into marae life at Rehua and knowing they have the support of the marae and that they’ll learn about their whānau connections is a big thing for me,” she says. “I never experienced that so I’m really grateful to Rehua for giving me this opportunity.”

Taylor, who lost her job in backpacker administration when the pandemic hit, has struggled to save for her own home. But the combination of high rents and high house prices has made her all the more determined to succeed, and she is confident being at the new Rehua apartments will give her the chance to save for a home deposit.

“When I lost my job it was back to week-to-week living and I wasn’t able to save. I cut our costs down as much as I could but it felt like I wasn’t getting anywhere. Once we’re settled here and I get another job, it won’t be such a struggle.”