Tasman Gillies is following in the footsteps of his father and pōua.
Kaituhi Morgan Lee reports. 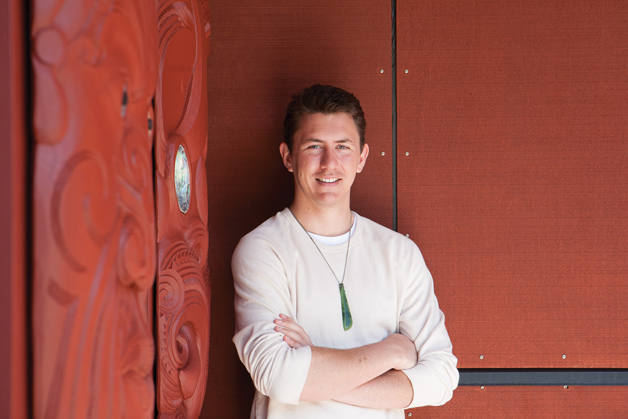 Every morning when Tasman Gillies starts work, he takes the lift to the fourth floor at Te Whare o Te Waipounamu in Ōtautahi. As the doors open, the first thing he sees is a photograph of his late pōua, Wiremu (Bill) Gillies.

It is a daily reminder of the legacy that Tasman (Ngāi Tahu – Ngāti Wheke, Ngāti Kahungunu), hopes to continue. His pōua Bill was a legend in the mahinga kai world and is remembered for his love for customary fisheries, Kāhui Kaumātua (Māori Elders Council), Māori education and his whānau. Uncle Bill was also the driving force behind Kaupapa Kereru, the Ngāi Tahu kereru restoration programme on Banks Peninsula.

In 1998, Uncle Bill, who was Upoko Rūnanga of Te Hapū o Ngāti Wheke, and Henry Couch, along with the support of the late Melville Rehu, lodged a proposal for a Mātaitai Reserve in Rāpaki – a first for New Zealand.

Their proposal was successful and under the Fisheries (South Island Customary Fishing) Regulations, Uncle Bill and Henry were made the first tangata tiaki (guardians responsible for managing fisheries resources for customary food gathering). It was also a New Zealand first.

Since the establishment of the mātaitai reserve 17 years ago, it has become almost a tradition for Rāpaki to provide tangata tiaki. Tasman is the third generation of his whānau to become tangata tiaki for the Whakaraupō (Lyttelton Harbour), following in the footsteps of his pōua, and his father Tawhirimatea (Matea) Gillies.

“In my mind, it made sense to become a tangata tiaki out home,” he says. “It was something I was going to be active in regardless.

“My manager here at Ngāi Tahu, Joe Wakefield, he had quite a bit to do with my pōua and I didn’t know this until I had my interview for my role here. And later, I found out that my pōua had gone along to tautoko Joe at his interview years prior – it’s really unique,” says Tasman.

“I always had the idea of working for my iwi in the back of my mind. I knew that Te Tapuae o Rehua had scholarships and grants that were fisheries (industry) targeted. That’s actually how I met Nigel Scott (Principal Advisor, Mahinga Kai) – he worked with my pōua. I was never certain that I would work for Ngāi Tahu, but I knew it was a possibility.”

Joe Wakefield in turn says Bill Gillies showed the way. “Uncle Bill was a mentor, not just for me but for a lot of young people. He was a very humble man, and in my mind was a great example of what an Upoko Rūnanga should be. He was an inspirational leader and a great role model for young people to look up to. Uncle Bill was a man of his word and practised what he preached. He would always make time for people no matter what.”

“My pōua had an idea for mātaitai and he contributed that, and now there are numerous mātaitai and taiāpure around the takiwā – that all came from them wanting to benefit the future generations, and I guess I want to take that forward as well.”

Tasman, at 26, seems mature beyond his years, and his parallel passions for Whakaraupō and mahinga kai are evident.

“Obviously my pōua passed away a while ago but having that connection in being tangata tiaki is special. I mean, I’ll go up the elevator at work and as soon as I get out of the elevator I see a picture of my pōua, and his face is looking at me with his tangata tiaki hat on – you get a sense of responsibility but also I get a sense of pride from having the role as well.”

He knows he has big shoes to fill, but he is determined to succeed in ensuring there is plenty of mahinga kai in the area.

“My pōua had an idea for mātaitai and he contributed that, and now there are numerous mātaitai and taiāpure around the takiwā – that all came from them wanting to benefit the future generations, and I guess I want to take that forward as well.”

Tasman’s specialty is zoology and marine science, but he says he initially wanted to follow in his father’s footsteps and study medicine.

“I sat back and realised I wasn’t going to enjoy medicine, so I had to think about what was going to interest me. I had to think hard about stuff that I naturally enjoyed and a lot of it came back to what my pōua was involved in – things like the mātaitai back home.”

Tasman, a former head boy at Cashmere High School in Christchurch, completed a Bachelor of Science majoring in Zoology and Marine Science at the University of Otago, and finally a Master of Science in Zoology, where he reseeded pāua in the East Otago Taiāpure.

Tasman says his postgraduate study took a little longer to complete than the average person. 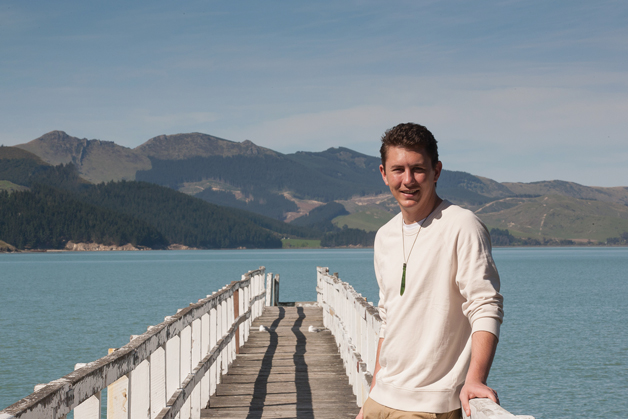 “We needed a permit to be able to reseed around 15,000 pāua into the East Otago Taiāpure. We waited around for a couple of months only to find out that I would be able to get a permit, but because it was Christmas, there weren’t enough people to help me out, and then there was a temperature spike in the lab so they (the pāua) all died.”

Last year, four days after handing in his master’s thesis, Tasman jumped on a plane and flew to Whistler, Canada, where he worked on the ski slopes during the busy winter months, and at one of the local pubs over summer.

Tasman and his whānau now live in Whakaraupō, but it hasn’t always been home. His mother Rebekah Lamb and his father settled in Australia, where they went on to own and run a GP clinic. Tasman and his two sisters, Ngahina (30) and Mihiroa (29), were born in Australia and grew up in Alstonville, New South Wales.

He says it was the passing of his Uncle Tony Gillies in 1998 that triggered the decision to permanently relocate back to Rāpaki. Tasman was 10 at the time.

And although he spent much of his childhood in Australia, he has many fond memories of spending time with his pōua.

“One of my favourite memories of when my pōua was alive was going out on the rocks with him out home and going crab hunting. He’d show me the different ways you could do it.

“Also, one of the cool things that I remember vividly from his tangi was when the kapa haka group from Cashmere High, who were mostly my mates, came to visit and tautoko us.”

Whakaraupō is Tasman’s tūrangawaewae. He says he feels a sense of belonging to the whenua, and there is a real sense of community with the whānau who live out there.

“Sometimes, Henry (Couch) will have been out and done a small trawl and he’ll ride his quad bike to our house and bring us flounder to eat – it’s those types of things that make living out at home (Rāpaki) special.

“A lot of my whānau and extended whānau are drawn to the sea. They have spent a lot of time working on fishing boats or container ships – as a whānau we have a real affinity to the sea,” he adds.

“I want to be able to take the skills that I’ve got and not just use them at home, but also use them to help other Papatipu Rūnanga.”

Tasman is well placed to do this mahi as a member of the Ngāi Tahu State of the Takiwā monitoring team.

“I didn’t spend heaps of time with my pōua because we lived over in Australia,” he says. “But just knowing what he had achieved in his lifetime is inspiring, and even now that I work at Ngāi Tahu I’m still finding out things about him. Sometimes I’ll even find out stuff about him, and I’ll be reading a book.”

State of the Takiwā was established in 2001 by Te Rūnanga o Ngāi Tahu as part of the tribal vision (Ngāi Tahu 2025) and the ‘Ki Uta Ki Tai – From the Mountains to the Sea’ resource management framework.

State of the Takiwā is an environmental and cultural health monitoring programme that aims to deliver information, including mātauranga Ngāi Tahu and western science, to Ngāi Tahu natural resource managers such as tangata tiaki/kaitiaki.

The State of the Takiwā programme and toolkit have been redeveloped and refined a number of times resulting in Takiwā 2.0 and now Takiwā 3.0. The current Ngāi Tahu State of the Takiwā Monitoring Programme, using the Takiwā 3.0 toolkit, has been developed in collaboration with tangata tiaki/kaitiaki and focuses on science and research as part of the ongoing ecological and environmental assessments of significant traditional fishing grounds within the Ngāi Tahu takiwā.