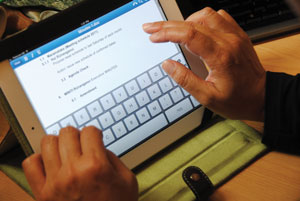 When Te Rūnanga o Makaawhio held its first paperless executive meeting, the room reverberated with laughter and puzzling queries as members tried to come to terms with their new Acer Iconica tablets.

The 12- member executive, aged from 30 to 70-plus, grappled with power-charging, screen time-outs and hitting wrong keys but most had been converted by the time the meeting finished. Tumuaki Susan Wallace says she’d have a fight on her hands now if she tried to take the tablets away. 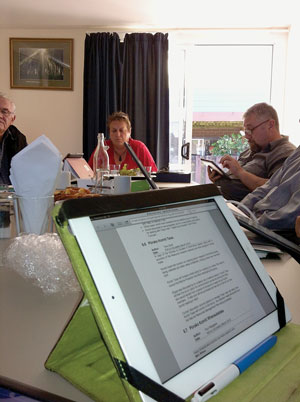 Pauline Adams and Gary Coghlan in the background.

“Everyone took to the new technology surprising well. We spent a bit of time at our first meeting running through the basics and most members found them very easy to use. I’d expected a lot of resistance but everyone was on board very quickly. Some still have a love-hate relationship with their tablet but based on our last executive meeting – the third using tablets – there’ve been no real problems.”

The move to paperless meetings stemmed from the rūnanga Taoka Inventory Project, supported by the
Ngāi Tahu Fund. The project focuses on the digital and photographic recording of all taonga attributed to and held by members of the Makaawhio rohe. That included the digital scanning of old photographs, whakapapa pages and treasured documents.

“That raised the whole question of how you go about safe storage in the 21st century,” Susan says. “We’d moved offices before and lost some of our papers and when we thought about the Christchurch earthquakes, we started to think about the tools that would help us secure safe storage and cut back on office costs.” 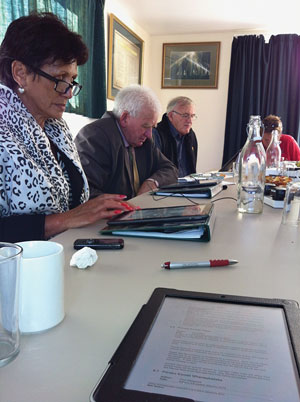 They began by investing in Acer tablets for the executive and each executive member agreed to forfeit a meeting fee to subsidise the cost. Susan estimates that the initial outlay will be covered by savings in staff time and stationery costs within six months.

“I used to spend days printing out and binding a 130-page agenda before each meeting. Now I send out a PDF via email and each member downloads that to their tablet. They can then use a range of applications to go through the agenda making notes, which we work through at our meetings. It makes far better use of our time both before and during the meetings.

“The only real issue we’ve had is the fact some members don’t have Wifi, which the Acer tablets need. But there are easy solutions to that. Some members come to the office, or to the local library to download the agenda and we have installed a satellite dish at the marae for when we have meetings there.

“It’s definitely something I’d recommend to other runanga. It’s made a huge difference in terms of paper and time savings in the office. I don’t print out anything anymore – we made a commitment to that – and now we’re looking into the best options for electronic and digital storage within the office itself. It’s made our executive meetings exciting, economic and fun.”

Jeff Mahuika has been pushing himself at the gym to get into the right frame of mind (and body) to carve 350 pounamu pendants for New Zealand’s Olympians.
It’s all about discipline, says Jeff (Ngāi Tahu – Ngāti Waewae/Ngāti Māhaki; Rangitāne).

“I’m into fitness. I go to the gym three times a day to get myself as close to the athletes’ mental state as I can. They’ve trained for years to get to this point and I want to be in the same frame of mind. I want to deserve the job.”

“I’m still training, even when I’m in my shed working the pounamu. I always work best under pressure and this way, I feel I’m experiencing the Olympics 350 times without ever leaving my seat.”

The pendants, carved from tahutahi or snowflake pounamu which is unique to the Cascade Plateau in South Westland, are a gift from Ngāi Tahu to New Zealand’s Olympians. The stone is distinctive for its brilliant white “starburst” features that Jeff associates with the snowy peaks of the Southern Alps.

Each of the 350 pendants, carved in the shape of a mere, has three grooves that signify the past, present and future. One side is left flat and unpolished, denoting untrained, undeveloped potential; the other side is rounded, “to remind the athletes that they’ve come from a raw state and made it to the peak of their chosen sport.” Each will have subtle differences, so that every athlete can connect to their own piece.

“In the old days when you saw someone holding a mere, you knew they were chiefs. They had the mana. I think that’s an appropriate design for the Olympics, which is a kind of modern warfare on the sports field.”

Working to a deadline within the tight confines of his tiny garden shed set amidst trees near Hokitika, Jeff is happy to acknowledge that pounamu has changed his life. He likes that his work shed has a dirt floor and no windows. He likes a confined space. It feels like a cave, he says. It reminds him of living in the bush. And when he’s finished the Olympic commission, he’ll be going bush again, to GPS pounamu locations for Ngāi Tahu in South Westland.

There will be a welcome home for the Olympic team in Hagley Park on Friday, August 24 at 11.45am.

The fleet of seven voyaging waka, Te Matau a Māui, Haunui, Hine Moana, Faafaite, Marumaru Atua, Uto ni Yalo, and Gaualofa are near the end of their epic voyage around the Pacific Ocean. The waka left Aotearoa in April 2011, visiting French Polynesia, Hawai’i and the west coast of the United States and returning this year via Mexico and the Galapagos. The fleet arrived in Rarotonga in May before carrying on to the Solomon Islands for the Pacific Arts Festival this month. Several Ngāi Tahu crew have been on board for major parts of the voyage including Brendan Flack, Ihaia Briggs, Tumarangai Sciascia and Tiaki Coates.

You can see the project and a trailer for the movie Our Blue Canoe to be released next year at www.pacificvoyagers.org . The voyage has been funded by the Okeanos Foundation for the Sea, and aims to draw attention to the plight of the Pacific, while igniting a movement towards traditional and environmental values. It has also stimulated Kaumoana Kāi Tahu, a local initiative to encourage more interest and activity in voyaging traditions. 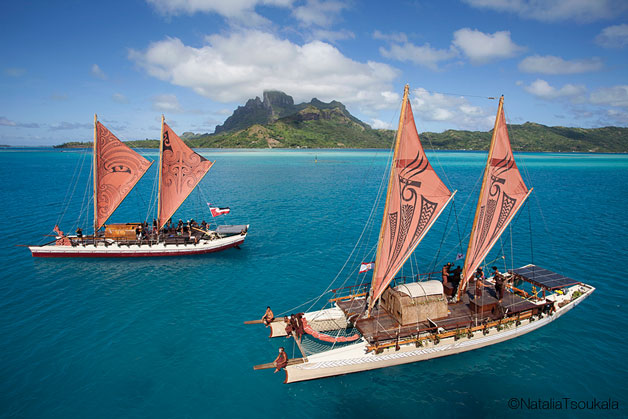 Ten-month-old Te Kāhu Harmer had apparently recovered after doctors removed a lithium button battery that he had swallowed. But four weeks after the battery was removed, he was rushed by the Royal Flying Doctor Service from his home in the Western Australian town of Bunbury to Perth, where he spent six hours in emergency surgery, followed by another eight-hour operation to repair his heart.

Lithium batteries trigger an electrical current when they come into contact with saliva, and can cause severe burns to human tissue within two hours. Te Kāhu had a lithium battery lodged in his oesophagus for 12 hours before it was removed. The battery had caused burning, and as a result, his gastric wall perforated, allowing his heart to pump blood into his stomach.

The night Te Kāhu became seriously sick, his mother was seized by an inexplicable sense of dread. 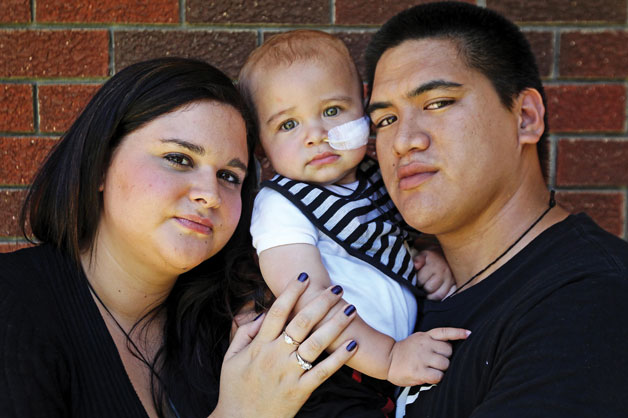 “Usually I go to bed at 8.30 but that night I stayed up past 1 am,” says Sorren. “Something kept telling me, ‘Don’t go to sleep’. I kept checking the kids but they were fine, but I felt so scared. Around 1.15 am, something told me to run to Te Kāhu’s room.

“When I got there he was sitting in his bed grizzling. I thought he was teething so I got some Panadol and a bottle. Halfway through the bottle I felt absolute panic and felt like I needed to run out of the room.

“I picked him up and started running but halfway down the hall he screamed, took a gasp, went blue and stopped breathing. If I had gone to bed at my usual time he would have bled to death in his sleep.

“All night I felt absolute terror and fear and I had no idea why. I guess we had some help from our ‘guardians’ or it was my mother’s instinct. I’ll never know what it was but I’m sure it’s why he’s alive. Even through the 14-hours of surgery and the doctors telling us he wouldn’t survive, I just knew he would live.

“At one point I told Caleb that he needed to call on his ancestors because they were they only ones who could save Te Kāhu. I know they kept him alive and that he’s meant to be here. The doctors are even baffled that he’s alive.”

The medical team who treated Te Kāhu at Princess Margaret Hospital for Children in Perth believe him to be the first person in the world to survive the type of injury he suffered. Te Kāhu is now well on his way to becoming a healthy toddler. 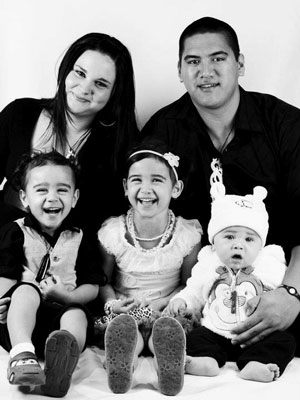 Sorren and Caleb with their children, Tahu, Āwhina and Te Kāhu

Sorren was born in Christchurch and moved with her family to West Australia when she was two. Her partner Caleb was originally from Hastings. His family moved across the Tasman when he was four. Caleb is Ngāi Tahu through his paternal grandmother, Utanga Wineera. As well as Te Kāhu, the couple have two other children, aged five and three.

Sorren and Caleb want to warn as many other parents as they can about the danger of lithium button batteries, which are found in many everyday items from greeting cards to remote controls to cameras. Their experience triggered a media storm in Australia, but Sorren also wants parents in New Zealand to be aware of the danger. “I just want to let people know how serious this is. These batteries are everywhere and it is so easy for a baby or a toddler to swallow one.”