Ahakoa He Iti, He Pounamu
The comeback kid

Rāpaki carver Caine Tauwhare is heading to Seattle in September after he carried out a carving project for the city’s Washington Park Arboretum. The project at the New Zealand glade is part of a Pacific garden at the arboretum. Caine (Ngāi Tahu – Ngāti Waewae/Ngāti Wheke/Ngāi Tūāhuriri, Tainui) says he decided on a kaupapa of kaitiakitanga (guardianship) in carving the garden seat. “I wanted to identify something representing Māori in general and kaitiakitanga seemed to fit.” And his reaction to the news that he will be flown to Seattle for an official opening of the garden in September? “It’s really cool, so unexpected.”

A garden being prepared in Laquenexy, France, is a collaboration between Ngāi Tahu, the Ellerslie Flower Show and a French designer as part of a series of ‘First Nation Gardens’. The garden, called Te Pūtake, is intended to showcase Ngāi Tahu culture and build relationships. It will feature in the 2013 Laquenexy Fruit Gardens Event that opens in June. After that it will become a a permanent fixture within the gardens.

The kapa haka kid ‘from way back’ recovers from a mystery illness to take the stage at Te Matatini 2013. Kaituhituhi Adrienne Rewi reports.

August 2012: Manawanui Parata is struck with a mystery illness that paralyses and almost kills him. February 2013: The same Manawanui powers onto the stage at Te Matatini 2013 in Rotorua to lead his kapa haka Te Ahikōmau a Hamoterangi. 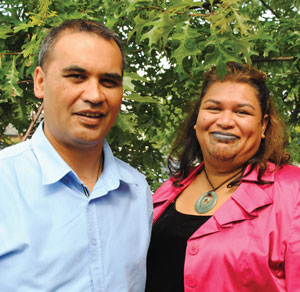 The resolve to perform at the national kapa haka competitions proved the medicinal inspiration needed for the 40-year-old from Rāpaki to recover from what was eventually diagnosed as Guillain-Barré Syndrome, a rare disorder in which the body’s immune system attacks part of the nervous system.

“I was determined I was going to get better,” says Manawanui, known to most as Mana. “I aimed for individual goals every day – physically and mentally. I had to relearn everything, from tying my shoelaces to feeding and dressing myself again. I needed to build my strength for kapa haka. By the time I left Burwood [Hospital] six weeks later, I had left the wheelchair behind and I was walking again.”

Mana’s sister, Puamiria Parata-Goodall, says it was amazing to watch his vital signs respond when a kapa haka practice was played to him in hospital.

“He’s a kapa haka kid from way back. His absolute determination to perform at Te Matatini was what drove him to get better.

“He’s been an inspiration to the team. They’ve seen him come back from full paralysis, and now we all need to work hard to keep up with him. It’s been a phenomenal journey,” Puamiria says.

It took almost two days before a neurologist finally diagnosed the rare condition, Guillain-Barré Syndrome (GBS), which occurs in only one in 100,000 people. It is usually triggered by an infection and can cause life-threatening complications.

Mana, who is business applications manager for the New Zealand Blood Service in Riccarton, Christchurch, says he had been working hard before his illness, and had felt tired, run-down and weak.

A lumbar puncture confirmed GBS. Mana believes a mild viral infection triggered the illness. The disease attacks the immune system and soon after diagnosis, Mana was given Intragam P, a blood product that neutralises antibodies and revitalises the white blood cell count to fight off the virus. When that didn’t work, he was admitted to Intensive Care with collapsed lungs, liver failure, and pneumonia. There he was put on life support, where he remained for three weeks. It was only after a second course of Intragam P that he started to progress.

It was a stressful time for his wife, Kiriana, their children and their extended families; but Puamiria says getting as much information as possible early on made things easier.

“Within a very short time I knew three people who had either had GBS, or had family members who had suffered from it. You can read all you want, but talking to someone who can tell you their real-life experience is much more empowering. It gave us a much better idea of what to expect and what we could do to help.”

The Parata and Te Hau whānau gathered at the hospital, taking turns to spend time with Mana.

“The staff were absolutely amazing,” says Puamiria “They respected our cultural beliefs and they allowed us to arrange a schedule of visits, and to have close whānau sleeping on a sofa and blow-up beds.”

It is ironic, Mana says, that the blood products available through his workplace, the NZ Blood Service, saved Mana’s life. He is grateful to his colleagues, who turned up at the hospital in person to deliver the vital Intragam P needed for his recovery.

By October, Mana was well enough to be transferred to Burwood Hospital. He sped through his physical recovery. “I’m very fortunate and it’s made me appreciate the important things in life – family, friends and kapa haka. I’m very loyal to the NZ Blood Service too, of course. I’m a very good example of how their work saves lives, and I’m a strong advocate for Māori putting themselves forward for blood and bone marrow donations.

“It’s important to remember that the blood you donate could save the life of someone within your own whānau.” 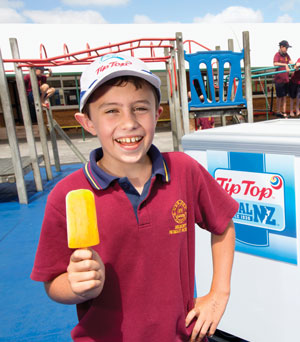 Business appears to be in the bones of 10-year-old Jay Verry who moved with his family from Christchurch to Auckland last year. He had always wanted to start a business but his best idea came while riding in the car with his mum along Auckland’s southern motorway, past the large Tip Top sign that stands outside the company’s Mt Wellington office. That was it, Jay (Ngāi Tahu – Ngāi Tūāhuriri) decided, he would sell ice-creams at the beach. It’s not a new idea but timing is everything in business. Tip Top’s market research had identified a market for mobile ice cream vendors. When Jay got on the phone to Tip Top’s marketing manager Craig Griffin, a deal was struck and the company agreed to supply him with his own ice cream bike. With the support of Belmont Primary School principal Bruce Cunningham, Jay embarked on a pilot scheme selling ice creams once a week at school. On his first day in business he sold more than 220 ice creams with the Popsicle Blasta selling out in the first 10 minutes. He has since appeared on television and radio, talking about his business.

“Jay has driven this project from when he first came up with the idea,”says his mum, Lee-Ann Ryan-Verry. “It took a few months from thinking of the idea through to selling the ice creams and he has never lost focus on what he wants to achieve.” – Nā Mark Revington

More than 200,000 birds are harvested annually by those with whakapapa rights to the Tītī Islands?

Some proverbs relating to muttonbirds.

Metaphor for an only child.

Could be used to express uniqueness or all the eggs in one basket.

Muttonbirds which fly by day can be seen, those that fly by night cannot.

A metaphor for a person of great endurance or strength.