He Aitaka A Tāne
Nīkau a taste of the tropics 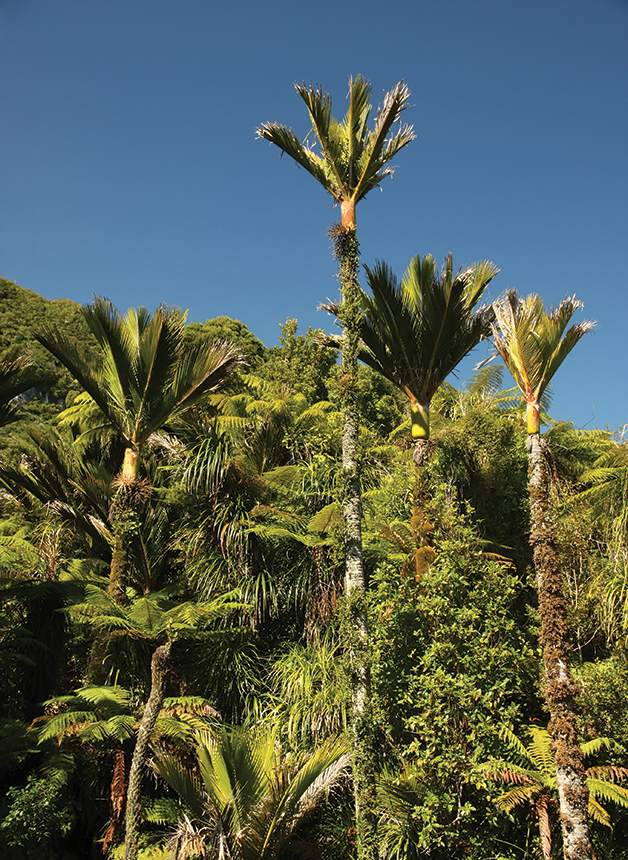 The nīkau palm looks like it belongs on a tropical island in the South Pacific, so its appearance as far south as Ōkarito or Akaroa is enough to stop you in your tracks.

In fact the nīkau palm (Rhopalostylis sapida) is the only species of palm native to Aotearoa, and is the hardiest member of the palm family found anywhere in the world; with the southernmost specimens surviving on wind-lashed Chatham Island and Pitt Island.

Its natural habitat is in coastal lowland forest in Te Ika a Māui (the North Island), as far south as Banks Peninsula on the east coast of Te Waipounamu, and either Greymouth, Hokitika, or Ōkarito on Te Tai Poutini (the West Coast), depending on which reference books you read.

Naturally nīkau, also known as the feather duster palm, prefers a mild, Mediterranean-type climate. It can survive a few degrees of frost, but may be damaged by sudden significant drops in temperature.

It is a long-lived species, taking 40 to 50 years just to get off the ground before its trunk begins to form, and 200 years to reach 10 metres in height. Mature specimens can reach 15 metres, with a stout green trunk topped by a bulbous crown shaft up to one metre long. Its graceful feather-like fronds grow up to three metres long.

Nīkau palms flower between November and April with large clusters of sticky, sweet flowers that attract nectar-eating tūī, korimako (bellbirds), wax-eyes and honeybees. Flower colours range between lilac, pink, or mauve; again depending on which references you read.

The fruits ripen between February and November, taking almost a full year to mature. The berries are edible when they are young and green, with a slight nutty flavour, according to Andrew Crowe, author of A Field Guide to the Native Edible Plants of New Zealand.

Crowe says the bright red berries look edible but are extremely hard – so hard they were used as bird shot by early settlers when ammunition was scarce. Other sources suggest the berries made useful decorations as necklace beads.

Naturally, our Māori tūpuna used the only palm growing on these shores the same way as their Polynesian ancestors elsewhere in the Pacific.

The fronds were an ideal material for thatching the roof, walls, and partitions of a whare. Growing fronds could be harvested sustainably every eight months without killing the plant. They were cut when they were fresh and green; their long, narrow leaves neatly plaited to provide a waterproof canopy or inner roof lining before they dried to a dark brown colour.

According to the Manaaki Whenua (Landcare Research) Māori Plant Use Database, this style of roofing was commonly used by Ngāpuhi in the north, but tōtara bark roofing was more commonly used in the south for construction purposes, probably because the nīkau palm did not grow as far south as Murihiku.

Sometimes the leaves were used to make rough mats and baskets, similar to those made from coconut palms elsewhere in the South Pacific.

The tender rito or heart of the nīkau was a much-favoured food either blanched or eaten raw for its succulent, nutty flavour. However, it was not commonly eaten, because harvesting this central growing tip meant killing the plant.

In his ethnobotanical reference book Māori Healing and Herbal, Murdoch Riley explains that the rito was known as “the guardian of Tāne” because harvesting the central shoot and its surrounding immature leaves killed the plant.

The following whakataukī hints at the plant’s vulnerability: “Mehemea ka koeretia te rau o te nīkau, ka rara te waha,” which translates as: “When a leaf of the nīkau is torn off, its voice shrieks.”

Pacific explorer Captain James Cook and his crew recorded eating this central shoot as a green vegetable on Cook’s first voyage to New Zealand in 1769, no doubt as part of his famous strategy to ward off the effects of scurvy for his crew on long ocean voyages. Some sources say the rito tasted like a mix of celery and coconut.

Early European settlers sometimes pickled this delicacy in vinegar. Other historical records show the bases of the inner leaves were stripped until the soft, white flesh was revealed, and that was the part they ate as a vegetable.

Nīkau leaves were sometimes used to wrap food before it was cooked, and immature flower clusters were eaten like cauliflower.

Māori also made water storage containers and pots from the outer portion of the nīkau trunk, and the stem of a frond proved to be a perfect fit as a splint for a broken or dislocated arm or leg, or even a full body splint.

Ethnographer Elsdon Best says the sap extracted by piercing the bulbous part of the nīkau trunk was drunk by pregnant women to make their labour easier. Other references record that expectant mothers cooked and ate the pith for a few weeks before childbirth, because of its effects in slightly relaxing the bowels and pelvic ligaments.

Several sources say the pith was regarded as a laxative, which is consistent with similar properties shared by the seeds of another closely related palm, betel nut, found elsewhere in the South Pacific.

Considering its history and value as Aotearoa’s only native palm tree, it is hardly surprising that nīkau holds such an important place in Māori traditions.