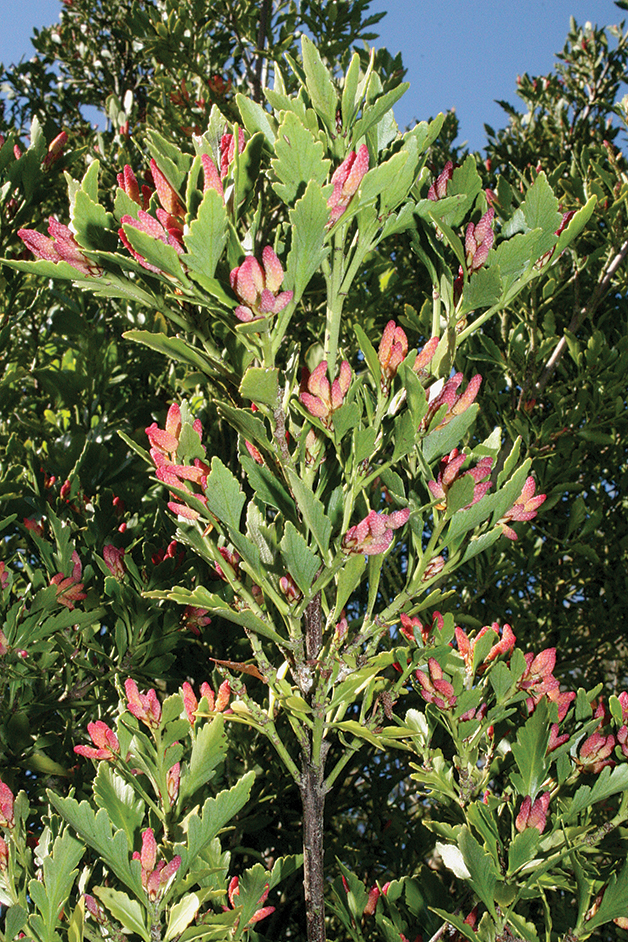 The most distinctive feature of toatoa is the fact that it has no true leaves. Instead this shrub or small forest tree has flattened leathery branchlets that look more like the leaves of celery – hardly a feature befitting a member of the chiefly podocarp family.

Three species of this ancient genus of plants are found only in New Zealand while three related species are found in Tasmania, Borneo and the Philippines.

Mountain toatoa (Phyllocladus alpinus) is closely related to tānekaha (Phyllocladus trichomanoides), known colloquially as mountain pine and celery pine respectively. Both are highly regarded for the strength and durability of their wood, one of the most elastic and wind-resistant timbers in the world.

Perhaps various interpretations of their Māori names of tānekaha (strong man, virile or strong in growth) and toatoa (warrior) give users a clue to the special properties of their timber. No surprise then that the timber of these close cousins has been highly valued for making springy fishing rods, for bridge-building, and for boat-building, where strong flexible planking was a distinct advantage for boat hulls thumping into a big Southern Ocean swell.

Mountain toatoa grows as a shrub or small tree up to 10 metres tall throughout the South Island, usually on the upper margins of beech forest between about 500 and 1650 metres of altitude, although it does grow right down to sea level in Southland and Westland.

There are at least three different forms of this very hardy, slow-growing species. A stunted, shrubby specimen grows up to a metre or so in height in sub-alpine scrub, which makes it ideal for rock gardens or where space is limited, while specimens on the margins of the beech forest reach their full potential, reaching a height of about 10 metres.

The cladodes (flat, leaf-like stems) on seedlings and young plants are narrow and pointed, while those on older trees are thick and leathery. Male and female flowers, fruits, and cones form along the margins of these cladodes.

In Traditional Lifeways of the Southern Māori, Ngāi Tahu ethnographer Herries Beattie said his informants told him toatoa had a very pleasant smell in the forest, and its aroma wafting on the wind served as a guide to the tree’s whereabouts.

Southern Māori used to collect its bark and carried it about with them as a scent, and one of Beattie’s informants told him the bark was used to make a scent similar to the highly-prized perfume extracted from the sap of taramea (speargrass or wild spaniard) in the high country of Te Waipounamu.

Beattie explains in some detail the practice of extracting “an everlasting dye of a brownish colour” from the bark of toatoa, evidently similar to the process used for producing dye from tānekaha further north.

Beattie records that the bark was placed in an ipu (wooden basin). Stones were heated red-hot in a fire and dropped into the ipu. When the first stones had cooled they were replaced with more red hot stones and the process was repeated until the right colour was achieved. Samples of whītau were used to check the colour of the dye.

In Māori Healing and Herbal, Murdoch Riley describes a similar process for making dye from the bark of tānekaha. He said the bark was cut off in pieces and pounded with a fernroot beater until it was softened, and then placed in a trough of cold water along with flax or other fibre to be dyed. Hot stones were dropped into the trough until the water boiled, the process continuing until the flax fibre took up sufficient dye, after which it was hung out to dry.

“The dye is high in tannic content and does not fade, even when washed in salt water,” he writes. “The colour obtained is reddish-brown. For a pink shade the weed kākāriki was bruised and added to the dyed water. For a yellow shade the bark of the pūriri tree was added to the water. From the mountain toatoa a brown dye was obtained.”

During the First World War, tānekaha bark was used to dye soldiers’ uniforms a khaki colour. The bark was once exported to England where it was used to dye gloves yellow, pink, red, or fawn. Home spinners also use the bark of tānekaha to dye wool.

Turning to medicinal uses of toatoa, Riley notes that the dark outer bark of both toatoa and tānekaha was scraped off and the inner bark was pounded and steeped in water. This liquid was then taken internally two or three times for the treatment of dysentery or diarrhoea.

Writing to the French Consul in 1890, Mother Aubert said: “I have found this (Natanata) unrivalled in the treatment of chronic illnesses of the stomach and especially among children, even those who are being breast fed, and also among old men.

“Many small children have been abandoned by doctors and, dying from diarrhoea and continuous vomiting, have been restored to perfect health in two or three weeks by the use of the Natanata.”