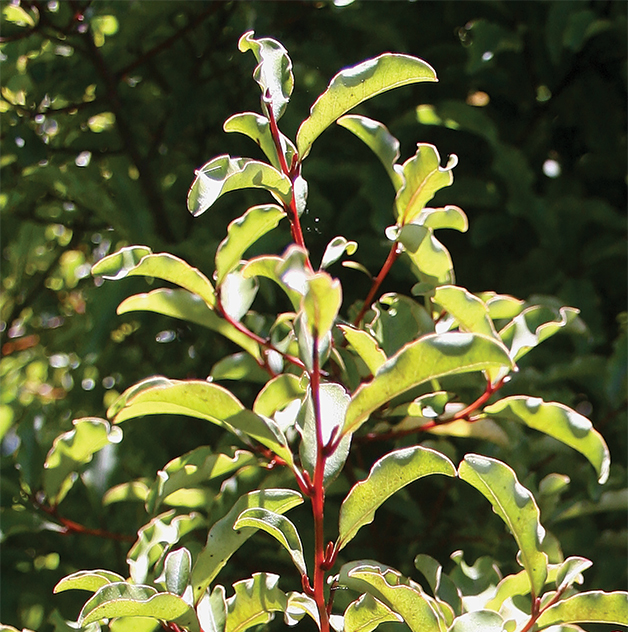 In Māori tradition māpou is regarded as a rākau tapu (sacred tree), and its main use historically was ceremonial.

It was one of several rākau tapu from which tohunga routinely plucked a sprig, dipped it in sacred water, and sprinkled the water from the sprig onto people or items that required cleansing, with an appropriate karakia or blessing. The same ritual would be followed for a tangi.

Sometimes a tohunga carried a staff fashioned from māpou as a badge of office.

Ethnographer Elsdon Best recorded that in the case of an illness, a person may take a wand of karamū (coprosma), māpou, or maire and touch the sick person with it, so the wairua or atua (spirit) of that person entered the wand.

Without stopping to talk to anyone, the person then took the wand to a tohunga, who could tell them whether or not the person would recover from their ailments.

A pole of māpou was sometimes used in kūmara planting ceremonies. It was placed at the eastern end of a kūmara plantation as a mauri, or physical representation of Rongo, the guardian of agriculture.

The plant was also used in traditional Māori rongoā (medicine), notably for the treatment of toothache and for cleaning teeth. The bark of māpou was washed and boiled, and the fluid of the bark was squeezed and held in the mouth until the pain eased.

Scientists have found the plant contains embelin, a compound used in India as a remedy for skin disease, intestinal worms, and as a general tonic. Māpou leaves also contain rutin, which is used in the treatment of blood vessel problems, and glucuronic acid, used for the relief of certain arthritic conditions.

Timber from māpou is exceptionally strong and springy, and will not break easily under load. It was used in the manufacture of composite adze handles, and for making handles of carpenters’ tools. It was also made into chairs, walking sticks, and fernroot beaters.

Scrapings of the inner bark of māpou and the bruised leaves of kawakawa produce a red dye. Fibre was wrapped up with this mixture and left to steep for some time, then dried in front of a fire.

Māpou is a very attractive specimen tree or shrub that grows naturally in forest margins or scrub throughout the country. It is tough, hardy, and thrives in almost any soil as long as it is not waterlogged.

It grows naturally in coastal areas, is very tolerant of strong winds, and its dense foliage and compact growth habit (usually of three to four metres) provides effective shelter grown as a hedge or shrub border on exposed sites.

If you don’t already have a māpou growing in your garden, it is a fine specimen to add to any native plantings.