He Aitaka A Tāne
Tētēaweka prefers life on the wild side 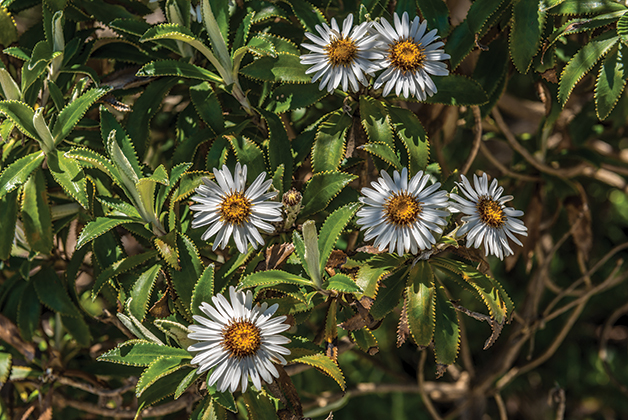 Roaring Forties gales blast through the turbulenttidal shallows of Foveaux Strait, which separates Te Waipounamu from Rakiura. This is no place for the faint-hearted, and that goes for plants as much as the hardy southern souls who live and work here.

The salt spray and frequent westerly gales are fierce enough to strip coastal headlands of native bush. But there is one hardy member of the daisy family that thrives in the windiest of places, never far from the sea; and actually struggles in more civilised, sheltered surroundings.

Tētēaweka (Olearia angustifolia) is a stoic Southern Ocean fringe-dweller, one of several different species confusingly described in many historical references as the ubiquitous “muttonbird scrub”.

As its colloquial name suggests, this stout shrub or tree shares the same wild, windswept habitat as another Ngāi Tahu taonga species, tītī (the sooty shearwater), which nests on the headlands and islands of Foveaux Strait and Rakiura.

Tētēaweka is very localised to its preferred habitat amongst coastal scrub along the Southland coast between Bluff Hill and Preservation Inlet in southern Fiordland, and on headlands, spurs, and islands around Rakiura and Foveaux Strait itself.

Like all plants in the Olearia family, it is hardy and well adapted to its environment, with a strong tolerance of gales and salt spray. It is often found growing right down to the water’s edge.

The biggest giveaway of tētēaweka’s lineage is its beautiful, pleasantly-scented flowers perhaps 3.5–5 cm across, with a characteristic daisy-like circle of white petals around a purple or violet centre. The dark green, scented leaves are 7–15 cm long, widest at the base and tapered towards the tips with a distinctive serrated edge. Like tikumu, the underside of the leaf is generously covered with a soft white down.

In Traditional Lifeways of the Southern Māori, Herries Beattie gives a detailed description of the method of construction of whare pōtaka (round houses) or whare rau (thatched houses) built without a centre pole in the Tītī Islands, using the curved timbers of tētēaweka, the closely-related tūpari (Olearia colensoi) or a species of Dracophyllum (grass tree) known in the south as inaka.

One of Beattie’s Murihiku informants recalled helping to build several of these huts on the Tītī Islands, and said the soil on the islands was soft and peaty so the branches of these trees could be pushed in deeply to anchor the whare.

“To construct a round whare, in which no centre pole is used, timber with a curve or bend in it is sought,” Beattie writes. “This timber is known as whiti and the cross pieces as kaho. It is thatched with wiwi (rushes), patiti (tussock) or similar vegetation, this thatch being called rau.

“A hole called putaka-au or sometimes koroputa is left in the top to let in light and let out smoke,” Beattie continues. “A fireplace guarded by stones (called pae by one of my informants) was in the centre of the floor and this fireplace was called taukahi according to two of the old men and takuahi according to others.”

This description captures the essence of traditional shelter design, making full use of the limited resources available. Obviously the size and shape of the whare pōtaka or whare rau was dictated by the curve of stems shaped by the prevailing winds, and the thatch covering depended on what was obtainable. No doubt the better the construction and tighter the thatch, the warmer the hut was.

Before the days of gas bottles, tētēaweka was used by muttonbirders for firewood to boil up pots of tītī, the fire burning with an intense blue flame and leaving a slag like clinker. If water was thrown on the fire, it sometimes set off a small explosion.

In Māori Healing and Herbal author Murdoch Riley records that scented leaves of tētēaweka were used on Rakiura and the Tītī Islands to reduce fevers. They were used in steam baths and to bathe bruises and aching limbs. Riley also records instances where the sap was used to heal festering wounds.

Tētēaweka’s conservation status has declined from “naturally uncommon” in 2012 to “at risk”.

Despite its handsome foliage and beautiful flowers, botanists say this hardy specimen, which looks like an ornamental succulent, is very difficult to grow in cultivation. It prefers to grow in soil that never dries out and in a cool situation on the southern sides of buildings or gardens.