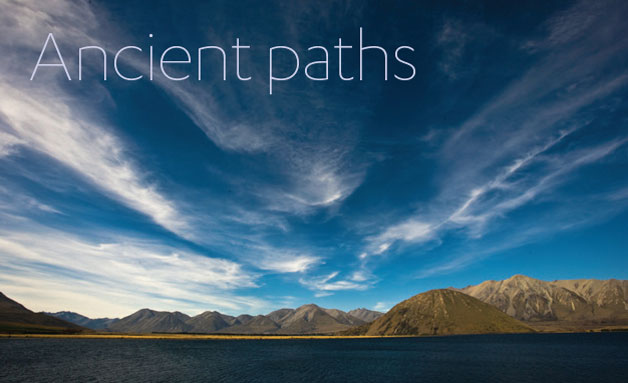 These days we are more likely to pack up and head for a bach or camping ground in summer, with everything including the kitchen sink. Our Ngāi Tahu tīpuna travelled light, heading up the Hakatere, Rakaia and Rangitata rivers to access the rich mahinga kai resources of Ō Tū Wharekai and the surrounding mid-Canterbury foothills. The foothills teemed with forest birds such as kākā, kererū, kākāpō and tūī during the summer months, eating the ripe fruits of the native trees of the kahikatea, mātai and pōkākā.

Ō Tū Roto is the Ngāi Tahu name for Lake Heron (pictured), a traditional mahinga kai site where weka, tuna, aruhe (fernroot) and kauru (made from the tap root or young saplings of ti kouka or cabbage tree) were gathered. It is also on the traditional trail linking the Hakatere with the Rakaia trails and onwards to Te Tai Poutini (the West Coast).

The Hakatere, Rakaia and Rangitata rivers were the principal travel routes to get to rich mahinga kai resources of lakes like Ō Tū Wharekai and the surrounding mid-Canterbury foothills, which were vitally important as part of the traditional Ngāi Tahu systematic mahinga kai patterns. In particular, the foothills were well known as an important hunting area for forest birds such as kākā, kererū, kākāpō and tūī during the summer months when they feasted on the ripe fruits of the native trees of the kahikatea, mātai and pōkākā. 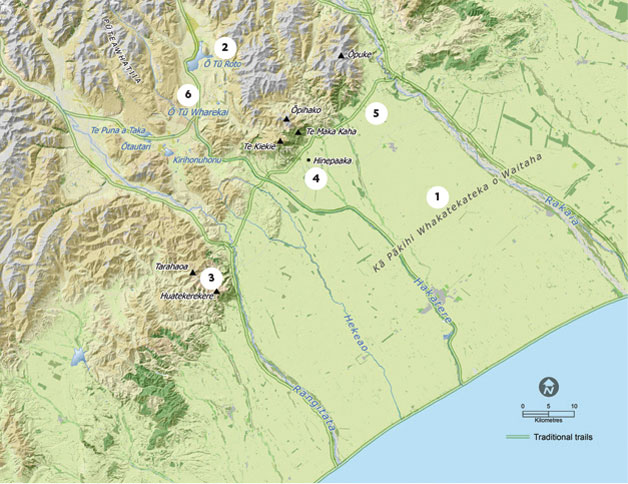 1 – Kā Pākihi Whakatekateka a Waitaha – The Canterbury Plains
After the Waitaha rangatira Rākaihautū and his travelling party discovered many of the great lakes of Te Waipounamu, they met up with his son, Rakihouia, and his travelling party in South Canterbury. Following the challenges of crossing mountain ranges, and making their way through dense forests, and over the rugged ridges and treacherous mosses of Otago and Southland, they rejoiced in the ease of travel along the edges of the Canterbury Plains. It was the joyful march of reunion along the plains which led to them being named ‘Kā Pākihi Whakatekateka o Waitaha’, ‘The open plains where Waitaha walked proudly.‘ Pākihi is an area where no trees grow and ‘whakatekateka’ is an archaic term meaning ‘to create pride or to exhibit pleasure’. Another view is that whakatekateka has a different meaning of ‘seedbed’ which offers the translation, ‘The treeless seedbed of Waitaha’, referring to the region where the tribe first settled and multiplied.

2 – Ō Tū Roto
Ō Tū Roto is the Ngāi Tahu name for Lake Heron. Ō Tū Roto is a traditional mahinga kai site where it is recorded that foods such as weka, tuna, aruhe (fern root) and kauru (made from the tap root or young saplings of ti kouka or cabbage tree) were gathered. Ō Tū Roto is located on the traditional trail that links the Hakatere with the Rakaia trails and onwards to Te Tai Poutini (the West Coast).

4 – Hinepaaka
Hinepaaka was a mahinga kai site located beneath the foothills between the Rakaia and Hakatere. Hinepaaka was marked by a mātai tree that could be seen throughout the Canterbury Plains and was used as a landmark by Ngāi Tahu travelling through the area. Hinepaaka was eventually blown down by a storm in 1945 and a monument was established nearby to mark its historical significance.

5 – State Highway 77
State Highway 77 follows the traditional Ngāi Tahu trail which skirted the base of the mid-Canterbury foothills linking the Hakatere, Rakaia and Rangitata rivers.

6 – Ō Tū Wharekai
Ō Tū Wharekai is the name used to refer to both the wider Ashburton Lakes area, and more specifically to the name of the two small interconnected wetlands commonly known as the Māori Lakes.
The Ō Tū Wharekai area was an important area for gathering weka,
aruhe, tuna and kauru.