Āu kōrero
Letters to the Editor 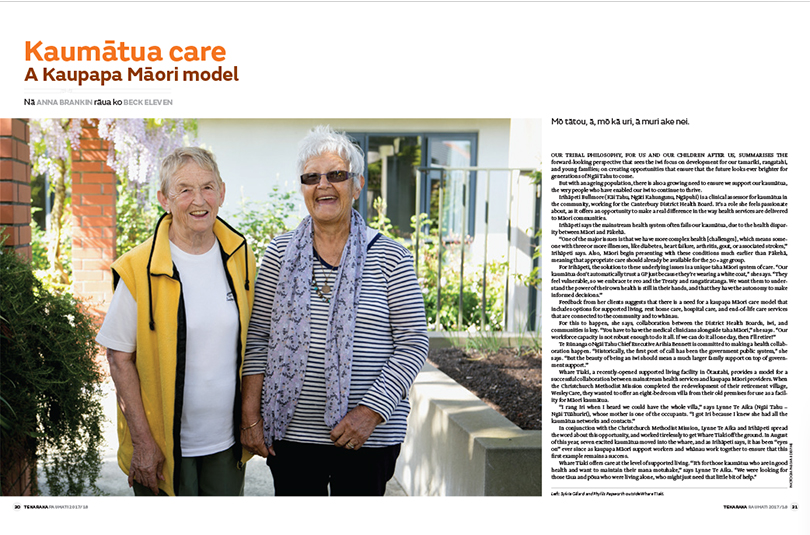 Late last year TE KARAKA ran a story on kaumātua care and Whare Tiaki, a trailblazing taha Māori model that offers supported living for those kaumātua living alone and needing a bit of extra help. Te Whānau Oraka – ka piki te ora o kā tamariki me kā tāua pōua. My philosophy is: If you have well children and grandparents, you have a thriving whānau!

It’s “how” we do this that matters! The story of how we create kaumātua care in keeping with Ngāi Tahu values depends on government policies, and how the community responds to these. Again, it’s the “how” that matters. Making inroads into local, regional, and national bodies is the best way to go for ongoing movement within the realms of community well-being. In my experience over three decades, “new” and “revised” systems of healthcare have shaped and formed what we have today. It may be time that Taha Māori informs and shows the way forward, where whānau/community look after themselves; and are resourced and supported by appropriate kaimahi/workers, agencies, and specialists.

Tino rangatiratanga is about self-determining, and more importantly, weaving the people together in a movement of oneness. I’m so thankful for the Christchurch Methodist Mission for providing the opportunity for Whare Tiaki to make tino rangatiratanga a reality for some very amazing kaumātua – our Whare Whānau. He mihi kau ana ki a rātou.

Ensuring kaumātua wellbeing and hauora/health inevitably betters whole whānau wellbeing. Just like the “old days” – taua and pōua are central to the working hub of the whānau. Kaumātua hold a very special place in my soul: they are our link to the past, present, and future. Not only in passing on their specialised knowledge, but also in supporting the parenting of the new generations, giving that amazing balance to all the generations. Māori culture embraces the concept of true whānau manaakitanga; no one is “left out”, no matter what the difficulties, disease, or disability. New Zealand culture/society needs to wake up and embrace our strengths, recognising we can do things together, as we have done, mai rā ano – from the beginning. Taha Māori should be celebrated, not debated!

Yes Whare Tiaki is a success – however in the long run, is this where our kaumātua truly want to be? Isn’t it about time we really looked at how our kaumātua see things, and for the whānau to have the right support to empower and embrace their own tino rangatiratanga and mana motuhake – whānau leadership and ownership?

My dream is that, for all, we can care for each other, the way our tūpuna had designed. Aroha ki te tangata te tahi ki te tahi. 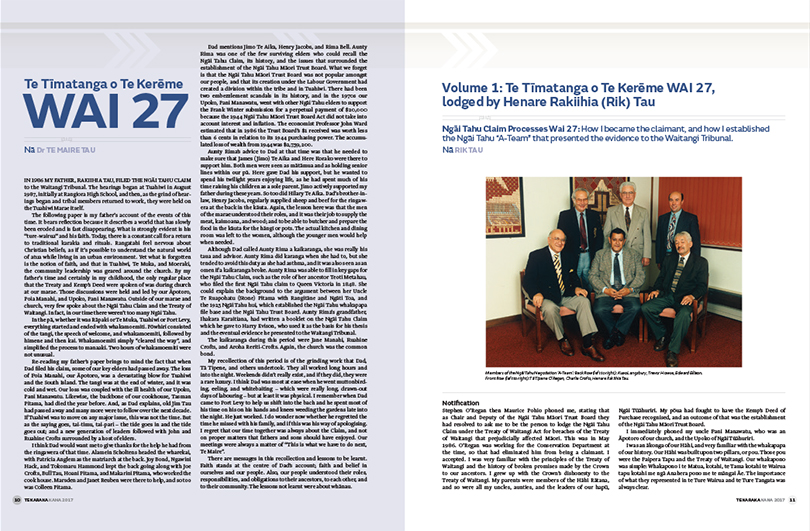 I write this note with considerable regret and after considerable contemplation. I have been strongly encouraged to do so by others, still living, who are familiar with the story of the more recent history of the Ngāi Tahu claims. I do so with a maximal degree of restraint and wish to limit myself to responding primarily to statements I consider to be untrue or inaccurate. I do not intend to review the overall historical perceptions of the late Rakiihia Tau – he is as entitled to his view of the history as I am to mine.

I appreciate that the interview transcribed in TE KARAKA was undertaken when Rakiihia was in late life and in poor health and following his return to a more active connection with his Rātana faith and its practice than had been evident during the tribunal and claim process period that he describes.

Te Weehi
The Tau document conflates, even confuses, the engagement of the Ngāi Tahu Māori Trust Board in the Ngāi Tahu claim processes and history with the separate, but related, history and circumstances of the landmark Te Weehi decision on customary fishing rights of 1986. Tom Te Weehi, a Christchurch resident of Ngāti Porou descent, was convicted with two Pākehā co-offenders of breaches of the fisheries regulations on the Motunau coast. Te Weehi sought the support of his relation, Te Awaroa Nēpia of the University of Canterbury, who engaged Michael Knowles, a Christchurch lawyer, to manage an appeal to the High Court. The Te Weehi appeal was successful. He was acquitted, however, on a basis of the common law principle of Aboriginal rights rather than a recognition of treaty rights; and the key evidence in his favour was statements by Rakiihia and Joe Karetai that he had been exercising rights granted to him by Ngāi Tahu under their customary authority. The decision greatly invigorated the ongoing efforts of the Ngāi Tahu Māori Trust Board to advance the discussions with the Crown over customary fisheries as an aspect of our mahika kai struggles, and Rakiihia took the lead in marshalling a tribal-wide response. It was Michael Knowles’ success in this case that led to him being recruited to advise the Board on the advancing of the proposed filing of our claim with the Waitangi Tribunal, which was to become WAI 27. The fisheries dimension of that claim was to turn on treaty fisheries rights, and a quite different basis of law.

The Lawyers
Rakiihia introduced his lawyer friend, David Palmer, to the Trust Board and the combined advice of Knowles and Palmer was then focused on the recruitment of a suitable QC to lead the now-filed Ngāi Tahu claim to the Waitangi Tribunal. We were advised that two QCs would be desirable, and I was sent off on the mission to approach Paul Temm QC of Auckland and George Barton QC of Wellington. Barton declined to work in tandem with Temm. I then went to Auckland and met Temm. After I survived a lengthy interrogation by Paul Temm, he accepted the brief. He, early on, insisted that as big a proportion of the hearings as possible should be held on marae. This had been on account of his past experience on Waitangi Tribunal hearings of which he had been a member, and he had some pretty cogent reasons in his favour – especially the aspect of community participation and attendance. I responded that there were existing parallels in Ngāi Tahu tikanga for handing the management of a marae-based process over to a manuhiri, as that’s just what we were doing quite regularly in Ngāi Tahu when non-Ngāi Tahu Māori were being buried from our marae around Te Waipounamu. We were regularly following the principle in those situations of “Te kawa o te marae te kawa o te tūpāpaku”. It is my clear recollection that Rakiihia readily accepted the operating principle and executed it with simplicity and grace. I find his description of a personal inner struggle over tikanga in this regard difficult to accept.

The Muldoon Interview
I have read very carefully the assertions of Rakiihia as to a TV interview between myself and the former Prime Minister Robert Muldoon in which he recounts that I said that the Ngāi Tahu claims would affect privately-owned property. I have reviewed the only TV interaction I have ever had with Muldoon – there is a copy in the Ngāi Tahu Archives – and I said no such thing. My only public TV argument with Muldoon – who by this stage had reduced himself to star billing in The Rocky Horror Show – was as to whether the Treaty of Waitangi applied in the South Island – it was his memorable “cunning part-Māori” taunt and my retort that made the interaction memorable. The fact of the matter is that I had made innumerable public and media statements over several years that the Ngāi Tahu claim was against the Crown, and not against the interests of private individuals. Both in the media and within the political system there were continual efforts to whip up public fear and anxiety about private property rights – the racist chant went on for years. I had been the principal tribal and national voice countering the slander and asserting the liability of Crown. It is the core untruth in Rakiihia’s recollection that I reject.

The Tuahiwi Pōwhiri
Finally, there is the Tau recollection of the events of the Tuahiwi pōwhiri to the Waitangi Tribunal that I wish to counter. A Palmerston North-based group calling itself the Kurahaupō Waka Society had lodged a cross-claim against Ngāi Tahu – purportedly on behalf of Rangitāne ki Wairau, but with a measure of engagement with various Te Tau Ihu tribal groupings. This was later to morph into the Tau Ihu cross claims in the Māori Appellate Court. Those claims to Ngāi Tahu lands as far south as Akaroa and the Hokitika River have not been actually withdrawn to this day. However on the day of the pōwhiri a bus full of these Kurahaupō people marched on to the Tuahiwi Marae in company with the tribunal and numerous Crown officials. Their spokesman on the day was Joe Tukapua, a Palmerston North-based Rangitāne kaumātua. When he spoke, he laid down their claim on the marae and capped it with the statement that he did so as a matter of right, because it had been a Kurahaupō karakia in support of Ngāti Toa that had caused the wind to change and enable the destruction of Kaiapoi Pā in 1831, with its accompanying genocidal slaughter. When Tukapua put down a koha, I consulted Rakiihia and then picked up the koha and walked up to him and dropped it at his feet with the words, “He utu pahi tēnā mō tō koutou whakaheke ki to koutou kāika!” – “That’s your bus fare for your return journey to where you’ve come from!” Waha Stirling and a couple of his whānau stood with a short haka of support as I returned to our paepae. The koha remained on the ground and was picked up by one of the hau kāika during the harirū. The Kurahaupō delegation left the marae before the harirū.

We welcome input from our readers.
Please submit your thoughts on the content we publish.

TE KARAKA reserves the right to edit, abridge or decline letters.
Letters under 300 words are preferred. The writer’s residential or email address is required, and a telephone number is helpful.