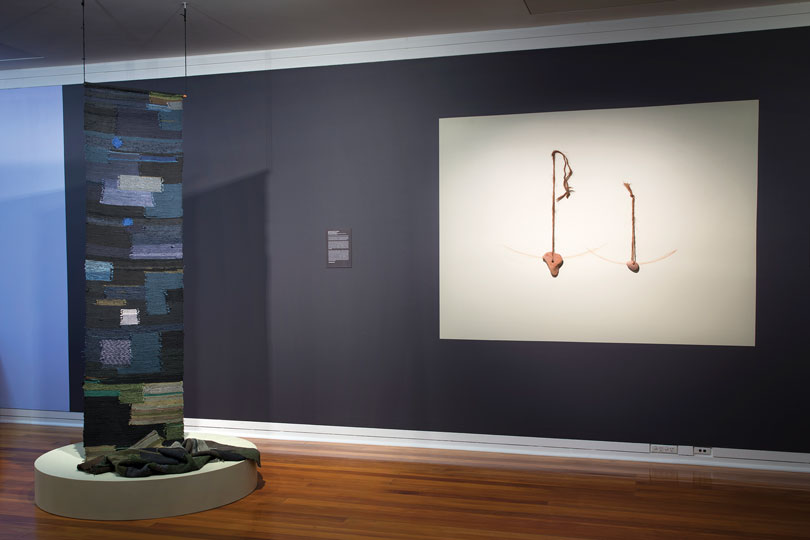 When entering He Reka te Kūmara you feel a sudden sense of calmness. With the beautiful sound of waiata gifted from Kotahi Mano Kāika, along with the softness of light, one immediately gets the overwhelming sense of being surrounded by taonga. Each piece in this carefully curated exhibition is created using a different medium and includes: three untitled, figurative line drawings from Ralph Hotere (Te Aupōuri,
Te Rarawa), Measure of Disorder a polystyrene sculpture by Peter Robinson (Ngāi Tahu) and Areta Wilkinson’s (Ngāi Tahu) Whakapapa VI (1) and Whakapapa VI (2) which are whakapaipai (body adornment/jewellery) made from kōkōwai (red ochre), coal, and flax baling twine. While not intentional, Madison Kelly says: “It shows there are many routes for knowledge to develop and be stored; there are many ways that we observe, feel, and reflect in te ao Māori. It only makes sense that the works are also diverse in their expressions. Whakapapa links us to our surroundings in non-linear ways, and I think that same mechanism is happening between the different textures, materials, generations and subjects in the show.”

The most powerful pieces of the exhibit are the two works by Marilynn Webb (Ngāti Kahu, Te Roroa) that greet you when you enter: Baby 3 and Baby and Fire. “Marilynn’s pēpi are powerful works, they are really the pou of the exhibition,” says Madison. 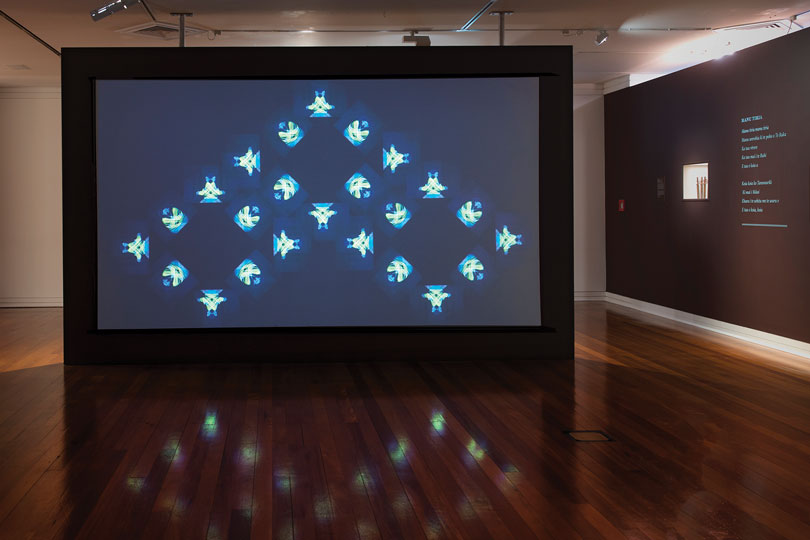 The process has been a journey for the wāhine and Madison says working with these taonga was huge for her in terms of her Kāi Tahutaka. “I think I hold and trust my whakapapa more comfortably because of the learning environment we developed together. Now we get the opportunity to share that with our whānau, continuing the kōrero beyond the exhibition. It means a lot to have a holding space like this, in the centre of the city, full of resources and different access points for those of us at all stages of reconnection.”

Each of the wāhine chose a different artist whose work represented their broader journey as artists and how the women in their lives guided them. Madison says that Areta Wilkinson’s whakapaipai are specifically important to her as an example of a distinct Ngāi Tahu way of creating her pieces. “Her materials, her approach to whakapaipai/body adornments as pepeha. They also link really strongly to our rock art and allow Ngāi Tahu whenua and tikanga to settle physically into the space.” They have been installed to leave traces of kōkōwai (red ochre) on the wall which goes back to the connection of the earth, the whenua, as well as the placenta, whakapapa and blood lines and it all goes back to the ‘babies’.”

It was important to the curators to ensure traditional Māori art and design practices were displayed in the exhibition for rakatahi to learn from. “This is creating a whakapapa of art that defines Aotearoa within world art history and enables us to see what is important within political and social histories of that particular time period,” Aroha says.

“It’s a really contemplative space, and we are keen to encourage people to appreciate the journey of learning, rather than always focusing on the outcomes.” 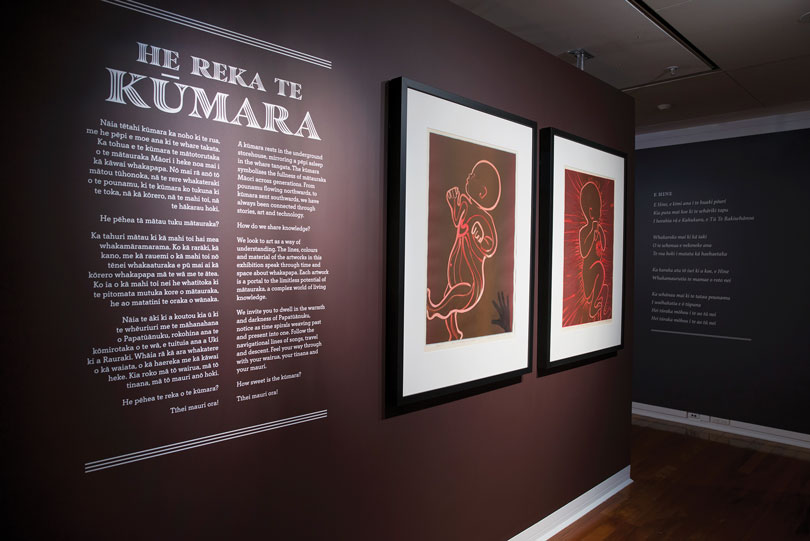 The exhibition extends beyond the walls of the Dunedin Public Art Gallery and includes Matt Pine’s Above Ground at Woodhaugh gardens and Shona Rapira’s (Ngāti Wai ki Aotea) Poles that Hold up the Sky at Oputae Gardens in Port Chalmers. Extending the exhibition into the natural environment and embracing the expanse mātauraka Māori occupies, instead of limiting these shows to traditional gallery space, is something the group thinks should happen more often.

“Public works like Shona and Matt’s remind us that te taiao is the starting point for much of our world view. When we share space with art and environment simultaneously, we see one reflecting the other. Like the tōtara in Matt’s Above Ground – as you enter the gardens you can greet a number of tōtara at different ages and stages. Walking through Matt’s work, the capacity and function of those rākau are revealed. You experience not just one artist’s perspective, but the tōtara’s position as tohu, resource, and entity. It’s a great example of how respect and reciprocity, which are so integral to our relationship to taiao, can be lived and felt through art.”

The space gives people a place to access and contemplate mātauraka Māori in an environment that is welcoming, safe and uplifting. One of the key messages the group wanted to convey was that knowledge regenerates. 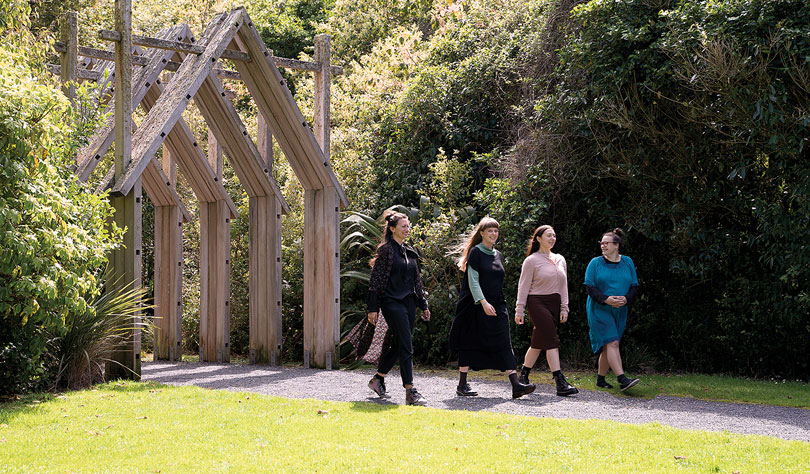 “It’s clear that through the ongoing process of being colonised we have lost so much, especially our reo. I wanted to acknowledge that loss and offer a sense of hope about the regrowth of our language, which those before us have worked so hard to preserve, for future generations,” says Mya. Incorporating waiata from Kotahi Mano Kāika, and having access to Kāi Tahu pukapuka in the reading nook allows visitors to immerse themselves further into te ao Māori and the ability to take knowledge away with them to share with whānau and friends.

He Reka te Kūmara is a stunning exhibition which beautifully displays the limitless facets of mātauraka Māori. Piupiu, Madison, Mya and Aroha say this is the beginning of exhibitions like this. “My hope is that the amount of people engaging with te ao Māori continues to grow beyond individuals, and becomes a given way of working amongst groups at all levels of the ‘art world’ and outside of it.”

He Reka te Kūmara is running at the Dunedin Public Art Gallery until February 27.