Beneath the cloak of Aoraki 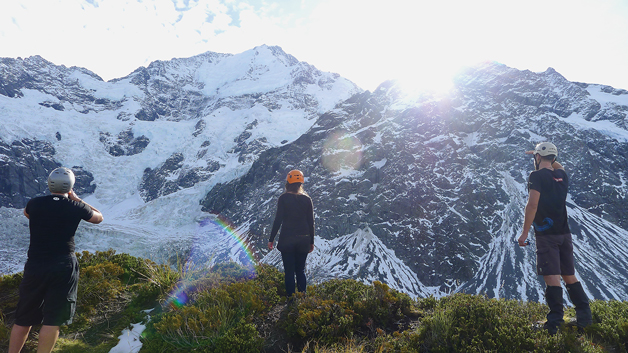 That’s what a friend told Kaharoa Manihera about climbing into the snow and ice of Ball Pass, right beneath Aoraki.

“Anyone who says, ‘Ko Aoraki tōku mauka’ in their mihi – well, it’s different once you’ve seen him. Just go. You’ll understand when you get there.”

Eight of us bounce around in the back of a troop carrier, on our way up the Tasman Valley. Lurching into strangers’ laps is a good way to get to know each other. Allan, Jasmine, and Paulina are tourists on a guided walk. Kaharoa, Donelle, my brother Tim, and I are on a Ngāi Tahu hīkoi to pay our respects to Aoraki. Up front are Elke and Paul. They’re guides with Alpine Recreation, the company founded by Elke’s parents Anne and Gottleib Bran-Elwert. Each year Alpine Recreation takes four Ngāi Tahu whānui on the Ball Pass Guided Hike free, to learn basic alpine skills, climb high into the Alps, stand close to Aoraki and look upon his face.

“When Ngāi Tahu ran the first Aoraki Bound trip, there was a big hākari near the airport,” Anne told me. “I was a member of the Tekapō Community Board and Gottlieb was on the Aoraki Conservation Board. We were both impressed with what the students had done, and afterwards, in talking with Mark Solomon, Gottlieb suggested that we offer four students each year a free place on the Ball Pass Guided Hike.”

Over the next three days we’ll walk to Caroline Hut, climb Kaitiaki Peak, then cross Ball Pass and descend the Hooker Glacier. Donelle and Kaharoa are also on a mission to harvest matua tikumu (mountain daisy) leaves for their aunties to use in weaving. First, we’ve got to reach the start of the track. Huge boulders perch above the road.

“Man,” I say. “It’d only take one of those to roll down and the road would be blocked.”

We round the corner. There’s a boulder in the middle of the road. The truck stops. Everyone looks at me.

“Alright,” Elke calls. “Everybody out!”

I’m relieved when Paul says the boulder’s been there for years.We untie the packs from the roof and grab our ice axes. There are plenty of ways to meet Aoraki: in kōrero and whakataukī, on postcards and TV, or glimpsed from the car as you speed past Lake Pukaki. We’re going to see him the old way – on foot.

Already, Tim and I have journeyed for five days to reach this point. Rather than drive to the base of the mauka we decided to walk there from the West Coast. We crossed the Main Divide via Noti Hinetamatea – Copland Pass – following the route of the Makaawhio ancestor Hinetamatea and her sons Tātāwhākā and Marupeka. We arrived in the village last night with just enough time for a shower and a pub feed. This morning it’s straight back on the trail.

Paul leads the tourist party off ahead of us. We pause first for karakia. Kaharoa’s voice is deep and rhythmical, asking blessings for the journey, acknowledging Aoraki as an ariki, as a pou. After the rowdy camaraderie of the 4WD trip the karakia brings a sense of stillness and focus.

Ball Ridge rises to our left, hiding Aoraki from view. To our right a ragged rock wall drops to the glacier below. In the old days the ice came up to where we stand. Thanks to the changing climate it’s melted away.

The first hour is an easy stroll along terraces beside the Tasman Glacier. The valley ahead is an austere but beautiful place: crumbling rock peaks and snow tinged blue with distance and sky. Ball Ridge rises to our left, hiding Aoraki from view. To our right a ragged rock wall drops to the glacier below. In the old days the ice came up to where we stand. Thanks to the changing climate it’s melted away. The glacier lake is growing so fast that maps of the area are always out of date.

At lunch beside the cheerful red Ball Shelter, we’re warned not to eat all our sandwiches.

He’s not kidding. We put on helmets and head straight up Ball Ridge. The day is warm and we’re soon sweating. Our packs are light, but they seem to get heavier with each step. Paul and Elke offer steady encouragement. An hour passes. Then another. 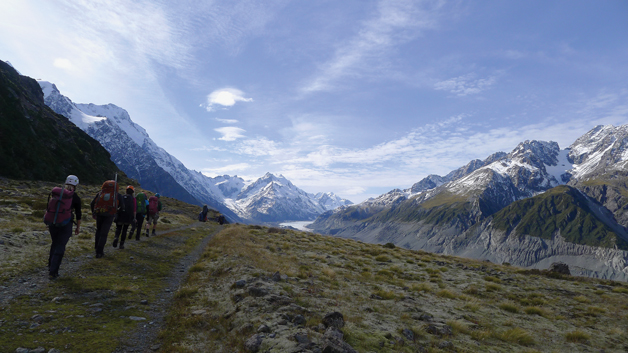 Not to sound like a whingey little kid or anything, Donelle says, but is there much further to go?

Elke’s just told us about a 22-hour climb she did on Aoraki’s south ridge. She smiles. A little further, she says. 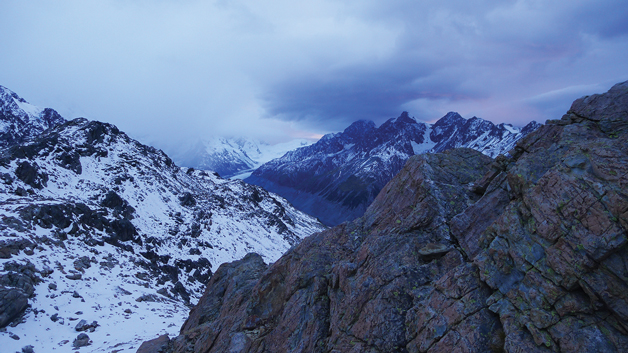 It’s quite a lot further, as it turns out. The banter dies away and all our energy goes into climbing. We hit patches of snow and the going becomes trickier. We concentrate on footwork. The world shrinks, until all we’re aware of is the sound of our breathing, the rocks we’re clambering over, the packs on our back. We forget where we are. Then we crest the ridge and look up. The sky is filled with Aoraki.

Tim, Donelle, Kaharoa and I stand in awe. This close, the mountain is all we can see. He’s gone from an outline seen at a distance to a fully-formed self: ice-faces, rock ribs, a ridged spine leading to his mighty head. It’s not just the height, soaring two kilometres straight up from where we stand, but the bulk. Something so vast creates its own gravity, and weather. Manaia-shaped clouds drift over the ridge.

There’s a westerly blowing, yet here in his shadow the air is perfectly still. We call out to him, mihi to him, and our voices echo back. We’ve just started walking again when a booming roar stops us in our tracks. A torrent of ice and rock avalanches off the Caroline Face. 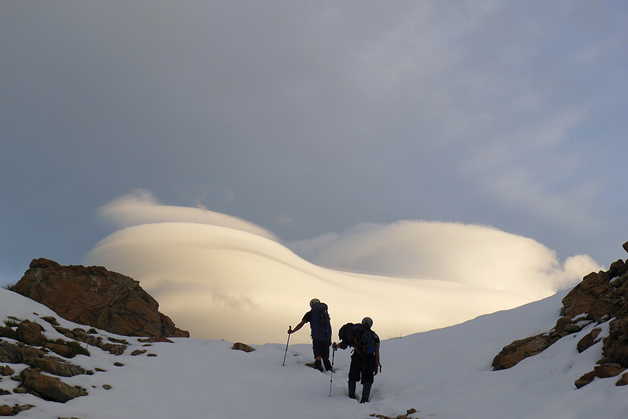 At Caroline Hut we kick off our boots, pick a bunk and put the billy on for tea. Our new home has one of the best views in the country, perched on a spur looking west to Aoraki. The hut is owned by Alpine Recreation, dating from a time when public conservation land was open to private enterprise. There’s a public shelter at one end that looks modelled on a walk-in freezer, but the main quarters are luxurious. At least by tramping standards: it has a pot belly stove, double glazing, and enough biscuits to survive an ice age. Elke’s immediately at home, roping people in to help with the kai. She’s been coming here since she was a child.

That’s it, someone else says. It’s your marae in the sky!

Sitting round the big wooden table, we feast and swap stories. This is a key reason for the trip: so Ngāi Tahu whānui, the guides, and their guests can share tales of Aoraki. Elke’s talked a lot about climbing trips on Aoraki, and I ask her about the mountaineering community’s response to our request that people don’t stand on the summit. She tells me that while it’s up to each individual – there’s no one there to see how high you climb – most seem to respect it. What’s more, it’s safer. After the top fell off, the new high point was dangerously unstable. It’s like Aoraki took care of that himself.

Paul asks about the word kaitiaki: tomorrow we’re going to climb Kaitiaki Peak to the south of Ball Pass. Kaharoa explains the concept of kaitiakitanga, and before you know it we’re off talking about Rangi and Papa, Aoraki and his brothers. We muse on just how close to the mountain our tūpuna might have come; how far into the snow and ice they ventured. Those from the tourist group ask questions and listen intently. It’s clear that, to each of us, the mountain means many different things – an ancestor, a mountaineering gem, a symbol of natural beauty, a tipuna, a tourism must-see – but is respected by all. Especially when you’re this close.

We wake to a sunrise of fire and mist. We’re off to climb Kaitiaki Peak, but first it’s time to run through some basic alpine skills. For most Māori, like most of the population, mountaineering isn’t common practice. The gear’s expensive, it’s perceived as risky, and some find the Pākehā culture of “peak-bagging” offensive. But coming to pay your respects to Aoraki is a different kaupapa. It’s great to learn the skills in a respectful context.

First up is fitting crampons. If you’re not used to walking round with spikes on your feet, it’s a strange experience. We march up and down the slope in wonky circles. To anyone watching we’d look drunk. The skill is worth practising though: when you get the knack it’s like suddenly gaining 4WD traction. 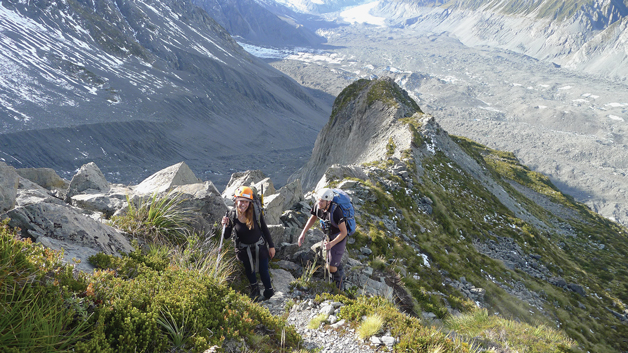 Next we take turns throwing ourselves down a steep slope. It’s called self-arrest, and the goal is to stop yourself with your ice axe. It’s an essential skill in case you slip and fall. We hurtle down the ice, wailing and laughing. We all fail to stop. There’s a safe run-out into soft snow, but it’s scary at first. By the end we’re halting as soon as the axe goes in. We’re ready to climb, but up here, the mountain dictates our moves. It’s too windy and drizzly to attempt Kaitiaki Peak. We head back down to the hut feeling damp, a little scuffed, and happy.

First light in the high mountains is profound. As Anne told me, “Even for non-Ngāi Tahu it is quite a spiritual experience being this close to such a mighty mountain.”

That night we go to bed primed for what’s known as an “alpine start”. This means getting up before dawn to walk the first easy hours in the dark. It leaves maximum daylight for climbing, and ensures you’re somewhere spectacular for sunrise. First light in the high mountains is profound. As Anne told me, “Even for non-Ngāi Tahu it is quite a spiritual experience being this close to such a mighty mountain.”

By 5 a.m. though, we’re wondering if Elke’s slept in. She doesn’t seem the type, and as the sky grows light we see rain shrouding the upper Tasman. It’s a shame we won’t get to cross Ball Pass, but it’s hardly the weather for a twelve-hour walk.

We make do with pancakes and coffee, then set off back towards the truck before the rain really sets in. Depending on who you ask, this is “the waterfall route” or “the shortcut”. There are ladders to climb, ropes to hang onto. We pick our way through snow, scree, and bluffs. While the tourist party negotiates trickier sections under Elke’s expert guidance, we meander along behind, chatting with Paul about alpine plants. Now in his fifties, he’s spent much of his life in these parts, and is generous with his knowledge and love of the mountains. We stop to feast on the subtle sweetness of tāwiniwini (bush snowberry), and crush taramea leaves in search of the scent our tupuna prized.

Before we reach the truck there’s one final thing to do: harvest those matua tikumu leaves for Donelle’s aunties. They’d watched Alpine Recreation’s Ball Pass video on YouTube, and kept hitting pause.

There! That one there! Those are the leaves we need!

Each time we pass a matua tikumu, Donelle and Kaharoa crouch down and cut a few leaves. They fill a plastic ziplock bag.

What are they going to weave? I ask.

Once prepared, the leaves will form a fine pale thread. I look back up the hill. I like the idea of a silvery cloak made from plants gathered at the feet of Aoraki, to be worn like the cloak of cloud that covers his face.