June Harvey Kitto is a wahine on a mission, determined to share the story of her journey with bowel cancer to raise awareness about the deadly disease. She sits down with kaituhi Anna Brankin to talk about the simple screening process that can save lives by catching cancer early. 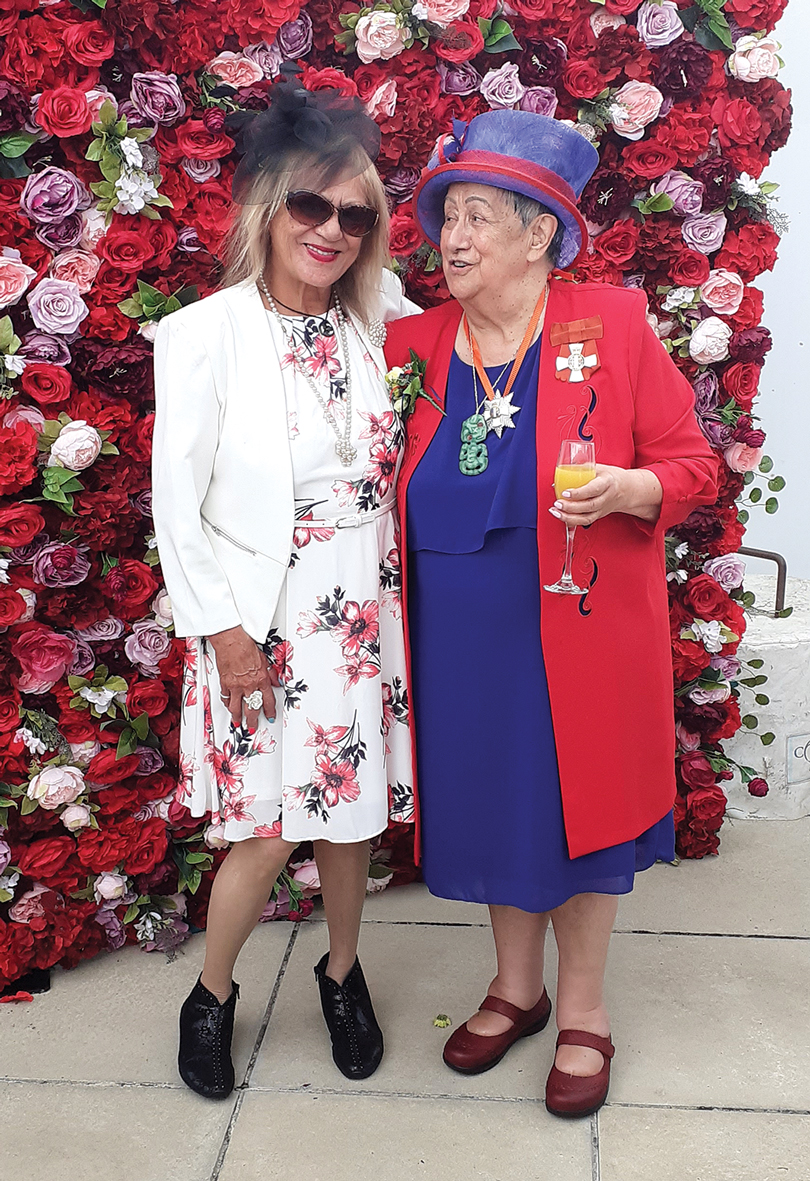 Above: June with the late Dame Aroha Reriti-Crofts at the garden party celebrating her honour.

At the age of 75, Kaiapoi mum and taua June Harvey Kitto has led a full life, with plenty of ups and downs. “At some points it’s seemed like hurdle after hurdle. I’ve always had to push, I’ve always had to fight for myself,” she says.

It was this fighting instinct that saw June overcome a diagnosis of bowel cancer, entering remission after successful surgery and chemotherapy treatment. “It was a hell journey, but I just thought ‘up you’ to the big C,” she laughs. “I decided to stay very positive about everything, and I had my whānau around me which got me through.”

June’s journey with cancer began in 2019, when she first noticed blood when she was on the wharepaku. Despite her usual reluctance to seek medical support, June knew this meant a visit to the doctor. “Us Māori will put off going to the doctor for anything. We never put ourselves first,” she says. “I’m the first to tell anyone else to get looked at, but hated having to go myself.”

When June shared her concerns with her doctor she was immediately scheduled for a colonoscopy – a confusing and overwhelming process that did nothing to ease her mind. The confusion began when a parcel landed on her doorstep without warning, containing what looked like medication. It wasn’t until she tracked down the sender and called them that June learned this was part of preparation for the procedure – a laxative to be mixed with water and taken the day before her appointment.

“That was really bad, because I had to take it upon myself to find that out. There was no communication, no education,” June says. “And that’s how Māori get left behind. Why do we have to put up fights with the health system?”

As a result when the day of her appointment arrived, June was extremely reluctant to undergo the invasive procedure – and even when she overcame her nerves she was disappointed to learn the results were inconclusive. Her doctor then recommended repeating the procedure to get a better understanding of what was going on.

“But at this point I was completely in denial. Not me, I decided. I’m not having any part of this,” June says.

Both her parents died with cancer, her mother at age 40 and her father at 62, and three of her sisters had been diagnosed with “the big C”. June thought that was enough bad luck for one whānau and she couldn’t possibly have it.

The outbreak of COVID-19 made it easy to put her symptoms to the back of her mind, and in any case the pressure on the health system meant it would have been difficult to get an appointment for the second colonoscopy, even if she’d been inclined to.

“Go and get tested, get a colonoscopy, don’t be embarrassed. Please, please – no matter how reluctant you are, no matter if you think it couldn’t happen to you, that you’re too young, whatever – just do it. I’d really love for my story to make a difference.”
June Harvey Kitto

It wasn’t until late 2020 that she finally accepted she needed to face reality when she attended Healthy Day at the Pā. This is a regular event run by Tuahiwi Marae to encourage whānau to look after their wellbeing. It also provides education on a range of health concerns. At this particular event June noticed what looked like a kids’ bouncy castle. On closer inspection she realised it was a giant inflatable bowel, big enough to walk through, that demonstrated the progression of bowel cancer from small polyps to advanced tumours. Staff from Christchurch Hospital were on hand to talk about the disease, and sign whānau up to receive a free home testing kit.

June and her husband Steve received their kits just before Christmas, and after following straightforward instructions they sent their tests away. When June’s positive result came back she was finally ready to accept it.

Unfortunately, this meant further tests – including another colonoscopy, x-rays and scans – to confirm the diagnosis and identify how advanced the cancer had become before a treatment plan could be made. “I was so scared by then, and thinking ‘what the hell? What’s going on? Is it a curse, is it a jinx?’” June says.

This time when the package arrived at June’s house she knew what to expect. “This time I drank the awful stuff, now knowing that it was to clean my bowels out completely.”

The tests revealed a tumour the size of a baseball growing in June’s bowel, and she was immediately connected with colorectal surgeon Dr Frank Frizelle. He recommended surgery, saying her case was urgent enough to defer other surgeries to accommodate her. He carefully explained that refusing surgery would have serious consequences for June’s health.

On the other hand the surgery itself wasn’t without risk – the tumour was too large for keyhole, meaning a more invasive procedure was needed so that Dr Frizelle could get in and remove “the nasty bugger”.

Terrified, June agreed to go ahead with the surgery on the first available date. She understood it was the best option, but she was still consumed with fear that something would go wrong on the operating table. “You hear of people going for these operations, and then that’s it, kaput,” she says.

June turned to her family for reassurance that she had made the right decision, and it was their support and aroha that gave her the strength to overcome her fears. The day before she was scheduled for surgery she rang her beloved aunty, the late Dame Aroha Reriti-Crofts, scared and in tears as she thought about what lay ahead.

“Aunty proceeded to say a karakia for me. At one point she stopped and asked if I was still crying and exclaimed, ‘Stop now! I will start this karakia again,’” June recalls. “I will always be grateful to her for the courage she gave me.”

The operation went smoothly, giving June a sense of optimisim as she went through her chemotherapy treatment. “I was very positive the whole way through that journey,” she says. “I don’t think there was a time when I thought I was going to die. I didn’t make any arrangements or anything like that, which some people do.”

After her treatment finished, June received the news she was hoping for. “Dr Frizelle said to me ‘you’re amazing, you’re a star, it’s gone!’ I felt absolutely buzzed when I heard that.”

Two years on, June still lives with the fear cancer might return, wondering if every twinge in her abdomen is indigestion or something more sinister. However, she knows the symptoms to look out for, and she now understands how to navigate the health system if she does need to seek further testing and treatment … and she wants to give other whānau the same confidence.

June is sharing her story in the hope that she can raise awareness about bowel cancer and, most importantly, encourage whānau to overcome any shame and reluctance they might feel.

“Go and get tested, get a colonoscopy, don’t be embarrassed,” she says. “Please, please – no matter how reluctant you are, no matter if you think it couldn’t happen to you, that you’re too young, whatever – just do it.

“I’d really love for my story to make a difference. I want to do something, I don’t want to just sit around and let life take hold of me.”

Bowel cancer is the second-highest cause of cancer death in Aotearoa, with more than 3,000 cases each year and over 1,200 deaths. Men are at increased risk of diagnosis compared to women, and although it’s most common in the 50+ age group, it can affect people at any age.

Māori and Pasifika patients are significantly less likely to participate in bowel screening, meaning they tend to be at a more advanced stage by the time they are diagnosed and begin treatment. There is also a higher rate of bowel cancer amongst Māori – 22% of Māori in their 50s are diagnosed, compared with just 12% for other ethnicities. It is important for our whānau to understand more about this disease so we can protect ourselves and our loved ones.

Being aware of the symptoms can make a real difference in early detection and successful treatment of bowel cancer.

See your GP right away if you have any of these concerns:
• Bleeding from the bottom
• Change in bowel motions
• Anaemia (low iron)
• Severe abdominal pain
• A lump or mass in the abdomen
• Tiredness and loss of weight

• See your GP – and don’t be afraid to get a second opinion if you feel your concerns are ignored
• If you’re between 60–74, you are eligible for the free National Bowel Screening Programme – a straightforward test you can take at home. Visit www.timetoscreen.nz for more information.