Sheer team work. Rakaia Incorporation is the winner of the oldest and most prestigious award for Māori agriculture – the Ahuwhenua Trophy – a competition to find the country’s best Māori dairy farm. No wonder chairman James Russell is proud to be raising the trophy with his colleagues.
Kaituhi Mark Revington reports. 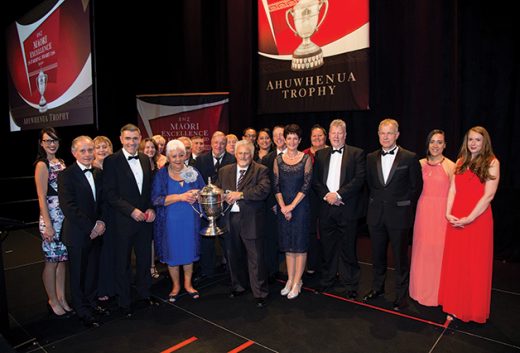 Up there at the awards ceremony earlier this year was Ngāi Tahu Farming, also a finalist along with the Tewi Trust from Tīrau. And when Rakaia Incorporation won the trophy, there to haka tautoko and waiata were their fellow Te Waipounamu representatives from Ngāi Tahu Farming. You could say it was a good night for Ngāi Tahu.

Originally there were 27 owners. Now there are 300 shareholders, who all whakapapa to Ngāi Tahu, spread throughout New Zealand and offshore. One vision of the Incorporation is to own 27 farms, one for each of the original owners.

The colonial story of the land goes back to 1848, eight years after the signing of the Treaty of Waitangi, when Ngāi Tahu began negotiating with Henry Kemp for the sale of much of the Canterbury Plains in what became known as ‘Kemp’s Deed’. The Crown, represented by Kemp, agreed to provide adequate reserves to ameliorate the small purchase price and money paid in instalments. The Crown didn’t keep its side of the deal, resulting in Te Kerēme, the Ngāi Tahu Claim. In 1877 as a result of protests by Ngāi Tahu at the inadequacy of reserves, the Kaiapoi Native Reserves Act granted a number of blocks of land to people who had been inadequately provided for in earlier awards. One of the reserves set aside was the land which would become Tahu o Tao.

At that time, the land south of the Rakaia had recently been surveyed but not yet allocated to European settlers, so it was one of the scarce blocks still available for the Crown to allocate to Māori. At the time of allocation, it would have been in a fairly bare looking state due to extensive sheep grazing. However, unlike many of the later reserve allocations which were located in far-flung places and were of poor quality, the soil and drainage offered considerable potential for development.

The Ahuwhenua Trophy was launched by Sir Apirana Ngata and Lord Bledisloe, then Governor-General, in 1933. Ngata argued that Māori land had been decimated by forced sales and lack of opportunity and capital during colonisation. The trophy would encourage skill in Māori farming, and emphasise retaining and improving what remained of Māori land.

Tahu a Tao was originally set aside as one of 16 blocks of land known as Rakaia 2058, and, in its early years, leased out to crop farmers. Of those 16 blocks of land, 14 have been sold and only Tahu a Tao was developed into an outstanding dairy farm that has dramatically increased in value and produced annual dividends for its owners. The philosophy of Rakaia Incorporation is about enhancing the land, and achieving sustainable returns.

“It is about retaining our ancestral land and creating value for our shareholders,” says Jimmy Russell.

He became chair of Rakaia Incorporation in 1996. A year or so later the land was transformed from cropping into dairy when the lease expired. The management committee commissioned John Donkers to advise on the conversion, and today he is still the farm’s adviser. Old pastures were re-sown, a method of increasing production that has continued to this day.

The transformation from cropping to dairy was about creating value for the shareholders and taking control of the land, says Jimmy Russell. In 1974, the cropping farmers who leased the land put in an offer for it, but an independent valuation revealed the offer was around half what the land was worth. Today that farm is valued at $13 million, and Rakaia Incorporation owns a second farm, Pāhau, near Culverden, bought nine years ago for $1.1 million, and valued today at $10 million. 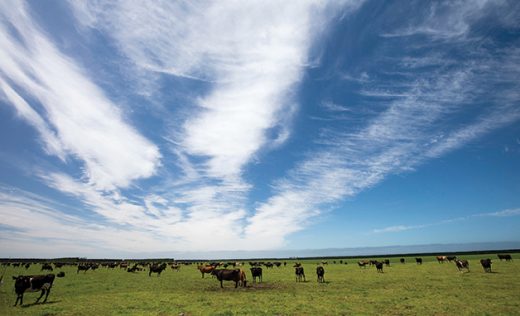 “I had farming experience with Māwhera Incorporation and could see the benefits of dairying,” says Jimmy Russell. “Everything fell into place when the lease expired in 1996 and we went into dairying.”

You could say dairying has been good to the shareholders of Rakaia Incorporation, but there is more to the tale than rivers of white gold.

“In difficult times it is important that leaders emerge and show the way for others,” writes Kingi Smiler, chairman of the Ahuwhenua Trophy management committee.

“There is no denying that the dairy industry is going through some difficult times at present with a combination of international factors well beyond the control of our farmers. We live in challenging times where market volatility and political crisis affect the sale and price that New Zealand earns for its primary exports – especially dairy products.”

But downturns are also an opportunity, he says, and a time to really focus on what makes a farm successful.

The philosophy of Rakaia Incorporation is about keeping land and improving it, says Jimmy Russell. Everyone works in together, from the management committee to the share milkers and staff. The land and the farm’s success enhances the mana of its shareholders.

“The management committee is concerned with governance and doesn’t interfere with day-to-day farming. But we work together with the share milkers, who love the way we operate.”

The share milkers, Mark and Julie Cressey, have been there for nine years, and the Ahuwhenua judges pointed to their relationship with the management committee as a factor in the farm’s success.

Also contributing to the win was a focus on the use of the latest seed cultivars to increase production, an advanced irrigation system, and a commitment to kaitiakitanga or guardianship of the land. All farm and household waste is recycled and effluent from the rotary milking shed is stored in a pond, allowing flexibility in applying effluent to the land to reduce the risk of nitrogen leaching.

The commitment to tikanga Māori is reflected in the values which underpin Rakaia Incorporation, says Jimmy Russell. The land is Māori reserve land and the owners farm not only for current profit, but for future generations.

“The land has the ability to give mana to people.”