The discoveries of two of the oldest waka found in New Zealand offer a fascinating insight into the early occupation of Te Waipounamu. 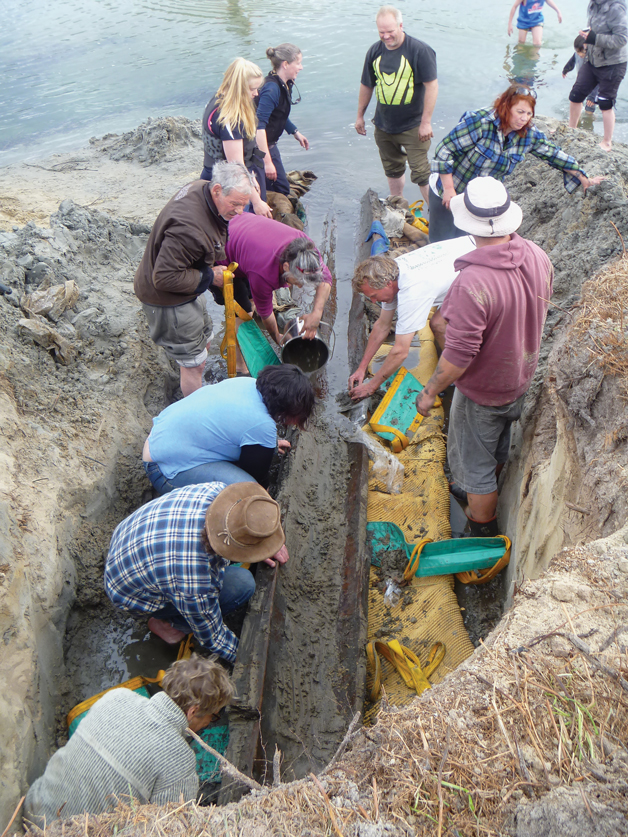 Volunteers lend a hand to extract a prehistoric tōtara waka from a sand dune
at Papanui Inlet in October. It is the second-oldest waka ever found in Aotearoa.

Rūnanga kaumātua Edward Ellison says the Papanui waka ties in with Ngāi Tahu oral traditions of the area, bonds the iwi more closely with its past, and adds another chapter to its history.

Papanui Inlet was the site of a populous village occupied over a long period by successive waves of Waitaha, Ngāti Māmoe, and Ngāi Tahu settlement. Stone from other places was brought back to this large settlement on the Ōkia sand flats, leaving a wealth of archaeological evidence of occupation over a long period.

Some famous tales of bravery, disputes, fierce battles, and bloodshed between Ngāi Tahu identities like Tarewai and Te Wera and their Ngāti Māmoe contemporaries have been preserved in oral legends passed down from generation to generation.

“In our traditions we always knew there were people located over there in that village,” Edward says. “Around Ōkia Flats there are oral traditions of various incidents and skirmishes that occurred between people from the Ngāi Tahu stronghold at Pukekura Pā on Taiaroa Head, and Ngāti Māmoe settlements near where the waka was found.”

The two tribes co-existed side by side in an uneasy truce, but disputes and disagreements broke out between them over fishing rights. In The Welcome of Strangers, Ngāi Tahu anthropologist and author Professor Atholl Anderson recounts the story of a Ngāti Māmoe tohunga at Papanui Inlet raising a storm which destroyed some Pukekura fishing waka, and in retaliation Papanui waka were broken up by Ngāi Tahu.

Initially, iwi and researchers were excited by the prospect that the tōtara waka recovered from Papanui Inlet in October may have been connected to those tribal skirmishes, but Ellison believes the waka may be older than that.

Tangata whenua from Te Rūnanga o Ōtākou, archaeologists, and historians are excited by the significance of this discovery because the waka was built with stone tools more than 200 years before Europeans landed on these shores. Most waka displayed in museum collections today were built with steel tools after the period of first European contact.

Compelling evidence of its age comes from a large quantity of dressed braided harakeke (flax) fibre found inside and under the waka hull, believed to be ropes associated with fishing or rigging of the canoe.

Radiocarbon dating of three of the fibre samples has given researchers an accurate estimate of the date the waka was last used as some time in the late 15th century (circa 1450 to 1500).

University of Auckland Senior Research Fellow Dilys Johns believes it is the second oldest waka found in New Zealand, “unless anyone knows of an older one.”

Edward Ellison says it was exciting to find the waka, “but to see this plaited material sitting there in the hull, I was flabbergasted to think that the hands that made that and used that lived 15 generations or more ago”.

He believes the age of the waka may actually pre-date Ngāti Māmoe settlement of Otago Peninsula. In The Welcome of Strangers, Anderson wrote that Ngāti Māmoe did not begin to settle in the South Island until late in the 16th century.

“I think (the waka) is probably earlier than Ngāti Māmoe,” Ellison says. “They may have arrived at the top of the South Island… just… but I don’t think they were here that early.”

He says the waka is more likely connected to the Waitaha people, who were definitely living on Otago Peninsula at that time.

Many human remains and taonga have been recovered from the Papanui area, but only a few taonga, including pounamu and adze tools, have been clearly identified as coming from the Waitaha period of settlement.

“I think this is the first time we’ve been able to accurately relate (an artefact) to that era,” Ellison says.

Given the dates of the braided fibre, he believes the Papanui site could be as significant historically as a major prehistoric moa-hunting village at the mouth of the Shag River.

Department of Conservation archaeologist Shar Briden was the first to identify the Papanui waka, in October last year. She and two colleagues were monitoring coastal erosion in the estuary when she spotted a piece of hardwood.

“I knew it wasn’t an old fence post, even though only a bit of it was showing above the sand,” she says. She dug away the sand, revealing a section of curved timber she recognised as a section of a waka hull. She covered it up and six weeks later was granted approval by Heritage New Zealand to excavate it.

DOC, the Yellow-Eyed Penguin Trust, members of the Ōtākou Rūnanga, and volunteers had been monitoring the Papanui site since 2007, when a volunteer found 56 pieces of tōtara from a waka that appeared to have been fashioned into a trap of some sort. Researchers also found an outrigger float that sparked considerable scientific interest, because not many of those have been found anywhere in New Zealand.

“We’ve found hundreds of artefacts eroding along that foreshore since 2007,” Briden says. “The channel has changed its course and is cutting through the sand dunes further north than it used to. Two occupation layers have eroded on the foreshore, so it’s hard to tell its context once the sea has mixed up artefacts from different cultural layers.”

A large team of volunteers turned up to help excavate the ancient relic and were amazed when the hull continued into the sand dune, one end buried under 1.6 metres of sand. The hull measures 6.17m long, 59cm wide, and 26cm deep. It has clear adze marks in the timber, confirming it was built with stone rather than steel tools. 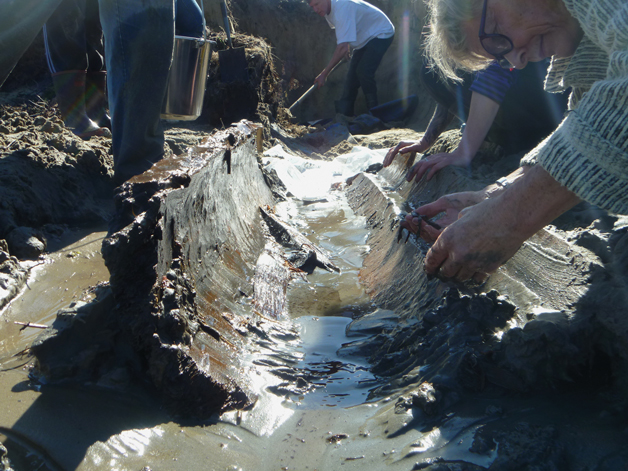 The hull was supported on a seven-metre long ladder, and volunteers in wetsuits carefully floated it across the estuary to the nearest road access point on pontoons used to rescue whales. From there, the waka was hoisted on to a truck, and moved to a safe location for conservation.

“To find something in its original state is fascinating,” Briden says. “Here we could see exactly where it was laying.” A cockle layer was clearly visible under the hull, and many waka parts have been found along this foreshore. Some human remains have also been found in the vicinity.

“It was a really lovely find that gives us some amazing information from that period,” Briden says. However, she says the find is secondary to her work of recovering kōiwi (human remains) that are being steadily exposed by coastal erosion of all the main early Māori settlement sites along the Otago coast.

Papanui Inlet offered early Māori a sheltered location for settlement. It had a wide range of shellfish and other kaimoana from the inlet, a reliable deep water fishery just offshore, and seals and penguins along the coast. The surrounding hills were covered in bush with abundant bird life, timber, and other resources necessary to support a large village.

Briden says locally-sourced stone is of particular interest to archaeologists. Trachyte from the southern side of Papanui Inlet was used to make some stone adzes. Opal flakes were found at Puddingstone Rock near Cape Saunders, the eastern-most headland of Otago Peninsula. Imported stone artefacts in the form of obsidian, pounamu chisels, orthoquartzite, and silcrete have also been found on this site and other occupation sites in the vicinity.

Archaeological evidence confirms early Māori settlements on either side of the Papanui estuary, Little Papanui, Allans Beach, and Sandfly Bay. These were probably fishing villages in close proximity to rich blue cod and hāpuka fishing grounds just off Cape Saunders.

The excavation of eroding midden sites at Sandfly Bay gave scientists their first radiocarbon dates of settlement on the peninsula, with samples aged 500–600 years old. The Papanui waka dates were just the second recorded on Otago Peninsula.

Dilys Johns says the construction of the Papanui waka is unusual. It has a long ledge down one side of the hull below the gunwale that then tapers out into the hull. When researchers plotted the co-ordinates to recreate an image of the other side of the hull, she says it appeared to be bilaterally symmetrical.

From preliminary analysis she says it looked like the ledge helped the waka keep its rounded shape and offered strength throughout its length, but more analysis would be required to confirm that.

“The ledge feature is quite unusual in ethnographic waka around New Zealand,” she says.

Coincidentally, the Papanui waka is the second waka unearthed by coastal erosion in the last few years. A large section of a sophisticated East Polynesian voyaging canoe was exposed on a remote beach near the Anaweka estuary on the north-west coast of Nelson during a major storm in 2012.

“Frequently a lot of work comes to my laboratory after storm events, because these storm surges uncover material buried for some time,” Johns says.

The Anaweka waka was carved from mataī, and radiocarbon dating of tōtara bark used to caulk the hull has dated its last voyage at approximately 1400 AD, making it the oldest waka known in New Zealand.

In a published paper, Johns and co-authors Geoffrey Irwin and Yun K. Sung reported that a unique feature of the Anaweka waka was a sea turtle carved in raised relief at the shaped end of the canoe. Turtle designs are rare in Māori carving, so the use of this motif may relate to the canoe’s early age and cultural associations with tropical east Polynesia.

Other striking features of this vessel are four transverse ribs carved at intervals along the hull, and a longitudinal stringer running along its length.

Johns says the Anaweka canoe’s complex composite construction may represent the technology available in the Pacific Islands at that time. Because builders only had small trees to work with, they had to build canoes in sections and lash them together.

“It is possible that when they got to New Zealand, the technology changed because they had bigger trees to work with, so they simply hollowed them out and attached side strakes to increase the freeboard.”

She says canoes built in the last 200 years have been almost, but not exclusively, built from tōtara or kauri.

“About 50 per cent of the canoes I’ve conserved in the laboratory or off-site have been mataī,” she says. “I find that rather interesting, because mataī sits a bit low in the water.”

The Anaweka canoe, and others recovered from Doughboy Bay on Rakiura, Paekākāriki, and near Tauranga were made of mataī, while the Papanui waka and an outrigger found just 30 m away were both made of tōtara.

Johns says analysis of the Papanui waka indicate it is very degraded, and that it will take three to four years for its conservation to be completed. It is currently housed under covers on the Ōtākou Marae, and decisions about its future housing and display will rest with the rūnanga.