In September, a group of whānau and Department of Conservation (DOC) staff travelled to the secluded island of Whenua Hou off the north-west coast of Rakiura. They gathered to witness the unveiling of three pouwhenua carved by Ngāi Tahu artist James York and supported by the Ngāi Tahu Fund, erected to acknowledge and embody the special relationship Ngāi Tahu shares with the motu. Kaituhi Anna Brankin was privileged to participate in this haerenga. 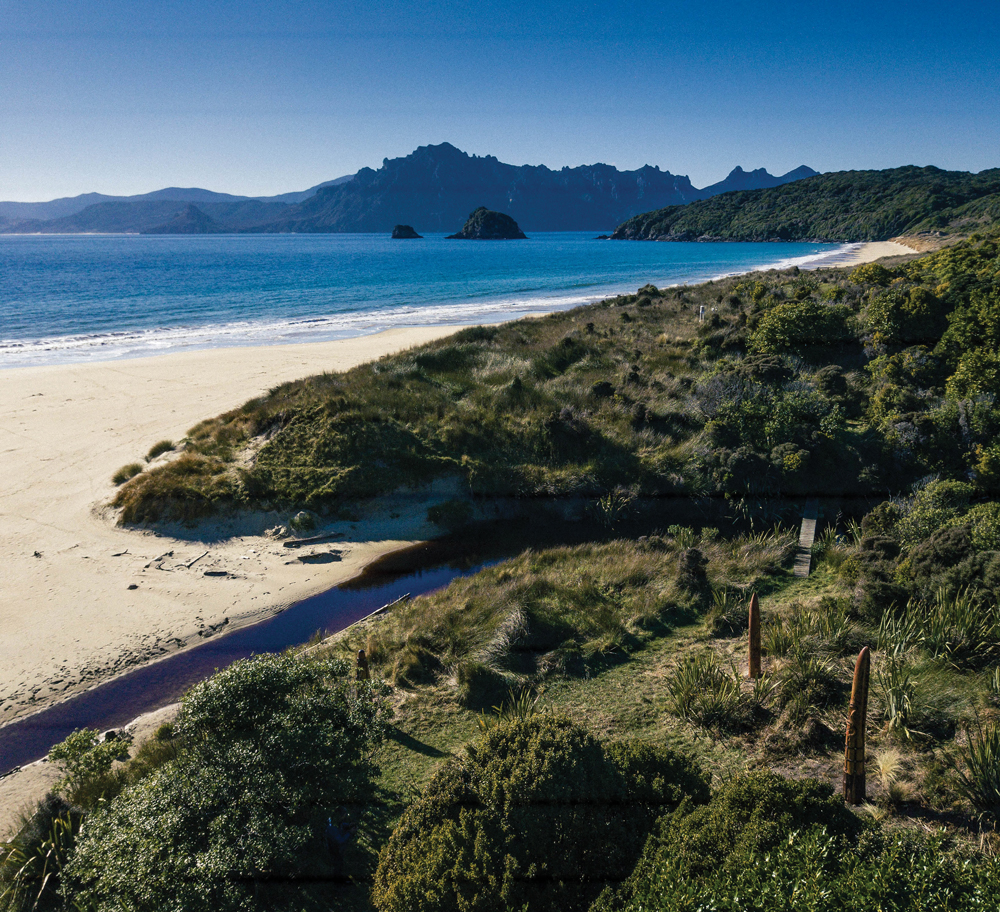 When preparing for my trip to Whenua Hou, I read and re-read a TE KARAKA article written by Helen Brown in 2013 about her first visit to the island. She entitled this piece “Homecoming”, and this is the word running through my mind as I step off the helicopter and set foot on this, my tūrangawaewae, for the very first time.

The island was a traditional resting place for muttonbirders as they travelled south to the Tītī Islands, and in the 19th century was a safe haven for European sealers and their Ngāi Tahu wives.
To this day, many Ngāi Tahu whānau trace their ancestry to these early unions.

The island was declared Crown Land in 1864 and since then it has been difficult to access, originally due to its status as a scenic reserve, and later because of the Kākāpō Recovery Programme. All visitors are required to undergo stringent quarantine procedures which ensure the island remains predator-free, while heightening the sense of disconnect and separation. 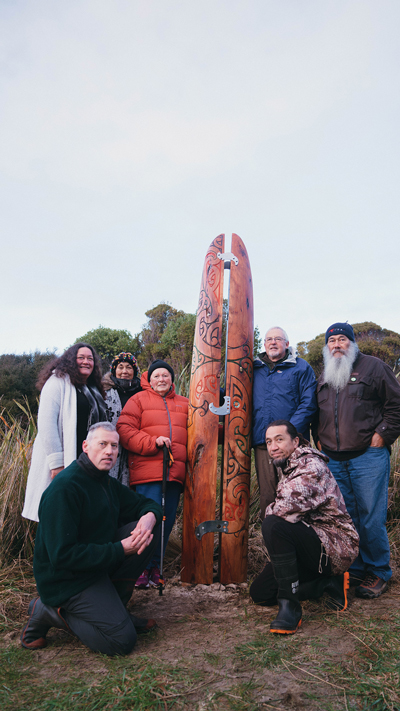 Both myself and Madison Henry, the videographer accompanying me, are descendants of the occupants of Sealers Bay.

As soon as our bags are rechecked and declared free of pests, Madison and I head into the ngahere to familiarise ourselves with the motu that would be our home for the next day – a motu that feels like it has been our home all along. With lush green vegetation all around us and birdsong floating down from the canopy trees, it isn’t much of a stretch to imagine what our tūpuna must have experienced when they occupied this island.

After the whole contingent of excited whānau have arrived, we gather in the DOC cabin located just above Sealers Bay. We are introduced to the island and the kaupapa by Dave Taylor and Tane Davis (both Ngāi Tahu – Ōraka Aparima).

Tane and Dave have been actively involved in Whenua Hou for a number of years – Tane as the chair of the Whenua Hou Committee, and Dave as a former DOC staff member who was able to organise trips to bring Ngāi Tahu descendants back to the motu.

The relationship between Ngāi Tahu and DOC on Whenua Hou is a direct result of the Ngāi Tahu Claims Settlement Act 1998. “Negotiators including my parents Wiremu and Jane Davis went into deep discussion, asking for the motu to be returned,” Tane explains. However, this was not to be. Instead, the Whenua Hou Committee was formed – a management body consisting of four Southland Conservation Board members, and a member from each of the papatipu rūnanga of Murihiku. 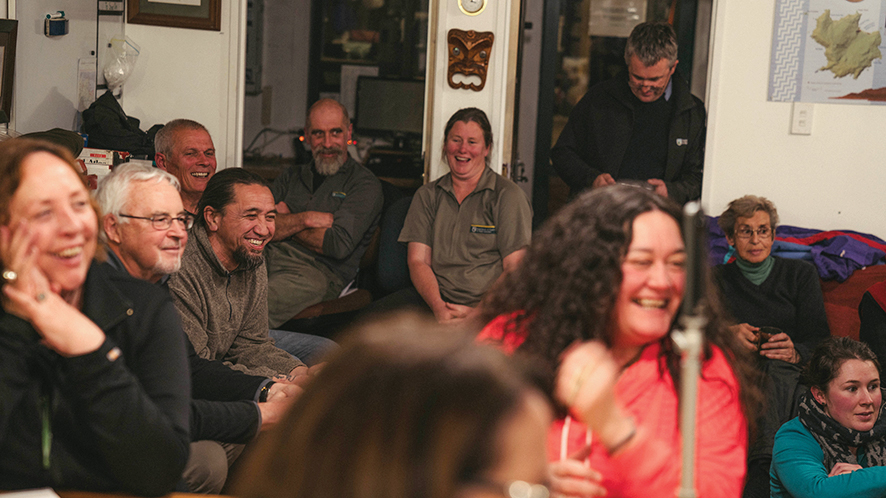 Whānau and DOC staff gathered together in the cabin.

“That was the Crown’s offer to us, which of course we accepted, because it gave us management back into Whenua Hou,” says Tane. “And as time went on we created an access policy to allow us to get more input back into the island.”

In the 20 years since settlement, the relationship between Ngāi Tahu and DOC has flourished, to the extent that Tane and James York were permitted to visit the island to source fallen tōtara for the pou, which DOC then transported to the mainland, and back again when the carving had been completed.

The other partner in this project is the Ngāi Tahu Fund. Chairperson Suzanne Ellison (Ngāi Tahu – Puketeraki) is excited to see the long-awaited outcome of this project. “This is the sort of thing that the Ngāi Tahu Fund really loves getting behind; supporting local endeavours that are special to our Ngāi Tahu people,” she says. “Being here, you can sense why our tūpuna came here in the past, and why we want to come back and keep that connection alive.” 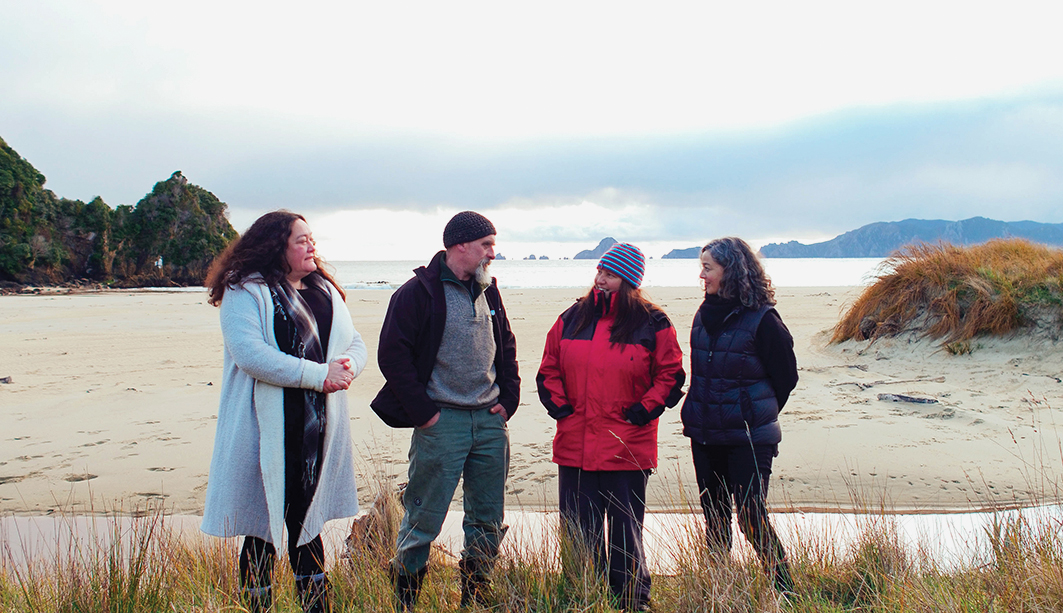 Sharing a kōrero after the unveiling.

In the evening, we pack into the cabin for a kōrero about the island. We learn about the earliest history of Whenua Hou from Atholl Anderson, who offers us a unique perspective both in his capacity as an archaeologist and as a fellow descendant. In 2007, he and Ian Smith of the University of Otago undertook an excavation on the island that confirmed that Ngāi Tahu occupation extends back many years.

“When [excavated material] was radiocarbon dated it turned out to be from the early 14th or even the late 13th century, as early as almost any site in New Zealand,” Atholl tells us. “It was really quite unexpected this far south in what now seems to be a pretty remote area, to have had this quite extensive occupation, right at the beginning of the human settlement of New Zealand.”

When carver James York (Ngāi Tahu – Waihōpai) first visited Whenua Hou to source the rākau for the pou, he found further evidence that confirmed this historical connection. “We saw quite a few trees that had been ring-barked – the bark had been taken off by a toki (adze), and would have been used for pōhā to store our muttonbirds,” he explains. “That whole walk, looking for the rākau, that actually sparked off the whole concept; and that’s basically that they’re in the form of pōhā, the pou.”

There’s a sense that the kōrero could continue for much longer, with a roomful of people eager to share and to hear stories of Whenua Hou. But eventually we retreat to beds scattered through bunkrooms, floors, decks, and tents. This trip well exceeds the capacities of the sleeping quarters.

I’m sleeping in a tent under the trees and spend most of the night captivated by the sounds of nocturnal kākāpō and ruru, before emerging into the chill of the pre-dawn air. As the sky begins to lighten, we shuffle down the path and across the bridge and catch our first glimpse of the pou, discernible only as blurred shapes in the half-light. As we approach, some of the wāhine deliver a spine-tingling karanga.

Later, Steph Blair (Ngāi Tahu – Awarua) says, “It’s always got an āhua to it, the karanga, but this morning was extra special. It’s that te ihi, te wehi, that back-of-the-neck hair-raising stuff.” 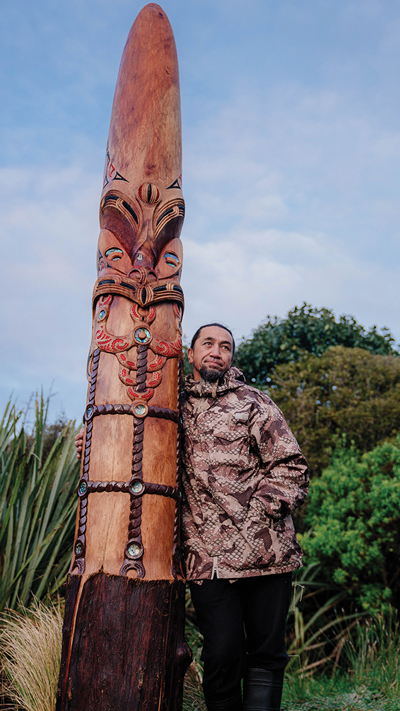 As we take the final steps towards the three pou, Aunty Jane Davis (Ngāi Tahu – Ōraka Aparima) performs a final karanga. Later in the morning she tells me that it was completely unrehearsed. “I heard the manu and I thought, oh well, it’s given me the first call, so I’ll just answer it. So it wasn’t practiced, it just came out,” she says. “There were others around us that we weren’t seeing. They were here, they are here. They were smiling. It was special, very special.”

“These pou have put our feet back in, not on the ground, but in the ground. The values and the history of our people is actually now becoming a fact. We are part of the island, just as the island is part of us.”
Aunty Jane Davis Ngāi Tahu – Ōraka Aparima

Finally we stand in the centre of the triangle formed by the three pou, and watch as they are unveiled by the gradual approach of dawn; a ceremony made all the more meaningful by its simplicity. Bubba Thompson (Ngāi Tahu – Awarua, Arowhenua) recites a karakia before Michael Skerrett, upoko of Te Rūnanga o Waihōpai, names the three pou in turn. 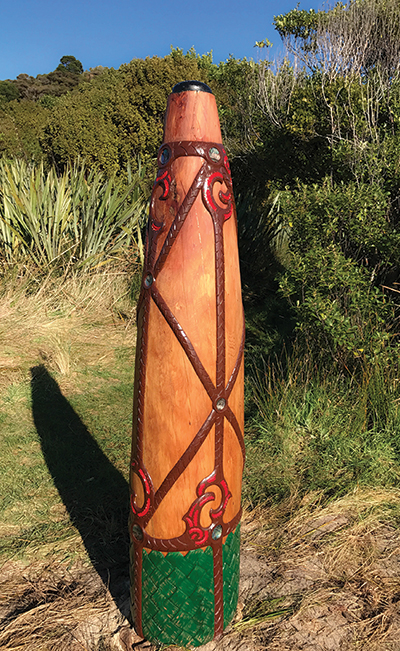 Te Pou Neherā stands proud and tall, set back towards the bush line. This intricately-carved pou represents the very earliest ancestors of Ngāi Tahu on this island. We learn that Atholl discovered more evidence of this occupation in the very hole intended for this pou; yet another tohu giving the sense that something long-awaited is finally falling into place.

The second pou, Te Pou Haumi, is carved as two waka joined together, embodying the union of the European settlers and Ngāi Tahu wāhine in the Sealers Bay community.

Finally, Te Pou Hou stands further forward, looking outward across the sand and into the future. It represents the enduring connection that Ngāi Tahu share with Whenua Hou in the present day, and for generations to come.

In the now-full daylight, captivated whānau walk among the three pou. The pou are striking in their detail, and we pore over every inch of them, running our hands across them, trying to learn them by heart. The awe we feel is heightened by the knowledge that we may not have the opportunity to see them again.

Determined to make the most of this precious time, whānau groups gather together for photographs. “To see those whānau gather around the pou that present their tūpuna, it adds a layer of reality to the whole thing,” says Bubba as he looks on. “Seeing those living mokopuna standing proud beside those pou that represent their past.”

“These pou have put our feet back in, not on the ground, but in the ground,” says Aunty Jane. “The values and the history of our people is actually now becoming a fact. We are part of the island, just as the island is part of us.”

All too quickly, the sound of an approaching helicopter signals that our visit is drawing to an end. Amid a flurry of goodbyes, we acknowledge the significance of the experience we have shared. The chopper circles over Sealers Bay as it takes off, and we can see the three pouwhenua clearly from the air.

As I watch them recede into the distance, I recall James’ words. “It’s an acknowledgement that we were here,” he said simply.
“Ngāi Tahu have been here, we’re still here, and we will keep standing here. So that’s what it’s about really.” 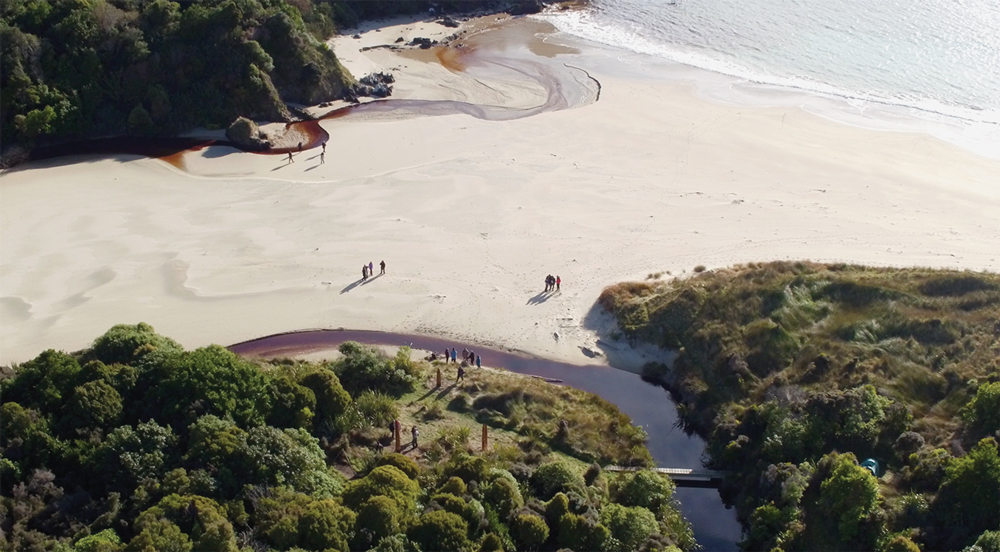 An aerial shot of Sealers Bay.