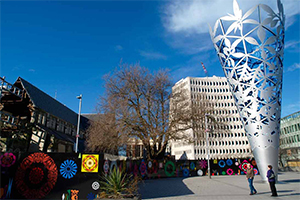 Cordons around Ōtautahi’s Square have been replaced with vibrant hoardings bearing signs, symbols and geometric architectural patterns, bringing new life to a dormant cityscape. A contemporary whare made of scaffolding, plastic bread baskets, and living plants also sits as a thoughtful juxtaposition to the ruined cathedral.

These works, by two leading New Zealand artists, Chris Heaphy and Sara Hughes, are part of the Transitional Cathedral Square Project, a Christchurch City Council initiative in collaboration with Te Rūnanga o Ngāi Tahu. The works pay homage to the Māori and Pākehā history of the area.

“Because of my Ngāi Tahu heritage, I feel very privileged to be involved,” says Heaphy. “For me, to use a whare at the heart of the city was an opportunity to explore both the cultural conversations between the cathedral and the whare, and ideas around the fragility of life.

“Before the cathedral was built, the land that the Square occupies was of importance to Ngāi Tahu. Ancestral bones lie under the foundations of the cathedral and the nearby Avon was a source of mahinga kai. It is fitting therefore, that the space be a place for an inquiry into our culture and identity, and must be reflective of movement, change and merger.

“As a high-profile area, it is important that artwork is engaging and serves the purpose too, of establishing arts as an integral component of the Christchurch rebuild.”

For Heaphy, producing the work was a chance to give back to the broken city where he spent a decade in Christchurch after graduating from the Ilam School of Fine Arts at the University of Canterbury in 1991.

He was invited to participate in the project by Christchurch Art Gallery Te Puna o Waiwhetu curator Ken Hall, and was immediately enthusiastic about creative possibilities. He acknowledges the Square was a challenging environment to work in — “in many ways, very and grey and lifeless” — but through that came ideas of protection, life, history and a need to reinvigorate the idea.

“Certainly the cathedral invited a response, both as a building in ruins and its iconic status within the city; but it’s also a place of religious community. I felt that even in its current state it needed to be celebrated for its connection between heritage and the rebuilding of the city. I was also interested in the many ‘restarts’ that have occurred throughout history, of people occupying these areas around what is now the city,” he says.

“For me, it was also about acknowledging catastrophe and loss of life, and to relay something of the fragility of life.”

He says the scale of the project has “pushed his practice forward”.

“Signs within signs that piece together indicators of [his] identity” are a key part of his artistic expression. That, he says, “is a search within the complexity of our lives for a kind of mindfulness, a never-ending search for understanding about where one is from, coupled with hope for the future.”

The recurring symbols and signs in his paintings are deliberately open-ended in their interpretation. He refers to this as the “slippage of meaning of the symbol,” where a certain motif may allude to a European walking stick, or an ancient Māori rock drawing.

“For me, it is about encouraging viewers to acknowledge the way in which differing cultures, communities and individuals reveal and define their identities — that notions like culture and identity are fluid, ambiguous and in a constant state of flux. It has been an honour to introduce some of these ideas to Cathedral Square,” he says.

Heaphy was born in Palmerston North in 1965. He gained a master’s degree in painting from RMIT in Melbourne in 1998, and has been awarded several high-profile fellowships and residencies, including a residency at the Cité Internationale des Arts in Paris, as well as the Veuve Cliquot Ponsardin Residency in Champagne in 2001.

He has exhibited widely throughout Australasia and Europe, and was represented in the 2007 Frieze Art Fair in London, with all three of his paintings exhibited by the Marianne Boesky Gallery of New York. His work is held in numerous major public and private collections. Heaphy currently lives in Auckland.