Little sisters are known to follow in their big sisters’ footsteps, but Mileena Allan-Griffiths has no problem crediting her younger sibling Arawyn for leading her to ballet. Kaituhi Ila Couch talks to the girls about their recent trip to New York City and their dedication to dance. 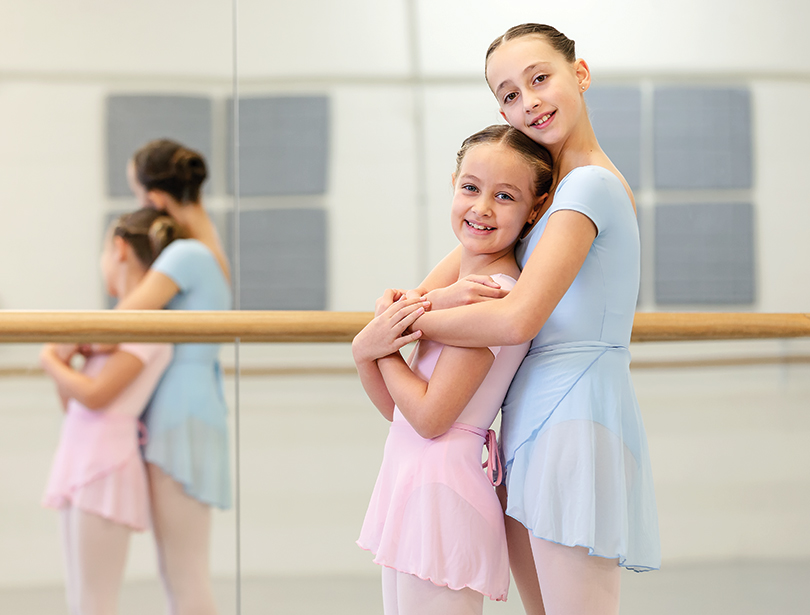 Above: Sisters Arawyn and Mileena at the Anneliese Gilberd Academy in Christchurch.

Arawyn has only just turned 10, and Mileena turned 12 the day after we spoke. “She’s going to be a teenager soon,” Arawyn says, sticking out her tongue and making a noise her older sister playfully mimics. The sisters have just returned from a big trip to the United States, an early birthday present for Mileena, who won a coveted spot in one of the largest ballet competitions in the world. Of the 10,000 applicants to the Youth America Grand Prix (YAGP) Ballet Competition in New York, Mileena was amongst just 1200 selected to attend a week of master classes, mentoring, and the chance to be discovered by directors of the most prestigious dance companies from around the world. Although the entire family got to be together on this trip, there was little time for sightseeing beyond a quick look at the bright lights of Times Square and a ferry ride past the Statue of Liberty. For Mileena, just being there was a big boost to her confidence. “It was a great experience to be with the other kids, and actually see that I must be good to be a part of it all.”

The girls live in Christchurch with parents Marianne (Kāi Tahu – Wairewa) and Richard, who make every effort to encourage their daughters to pursue as many activities as their time and family budget will allow. Arawyn is enrolled in hip-hop, tap, jazz, and musical theatre classes; but says it was her first love, ballet, that inspired her big sister to start dancing. “I started ballet and then Mileena wanted to try it because I was having so much fun.”

Mileena was seven and had only just started taking ballet lessons when a visiting teacher from Italy spotted something special about her. “We were watching the girls through the window and he said, ‘That girl there is going to be amazing.’ We didn’t tell him she was our daughter,” says Marianne. “Dancers, if they know what they’re looking for, can watch kids doing the basics and know what potential they have. He saw that just by watching Mileena stretch.” This led to a call from the dance director with an offer of a scholarship to cover the cost of tuition. 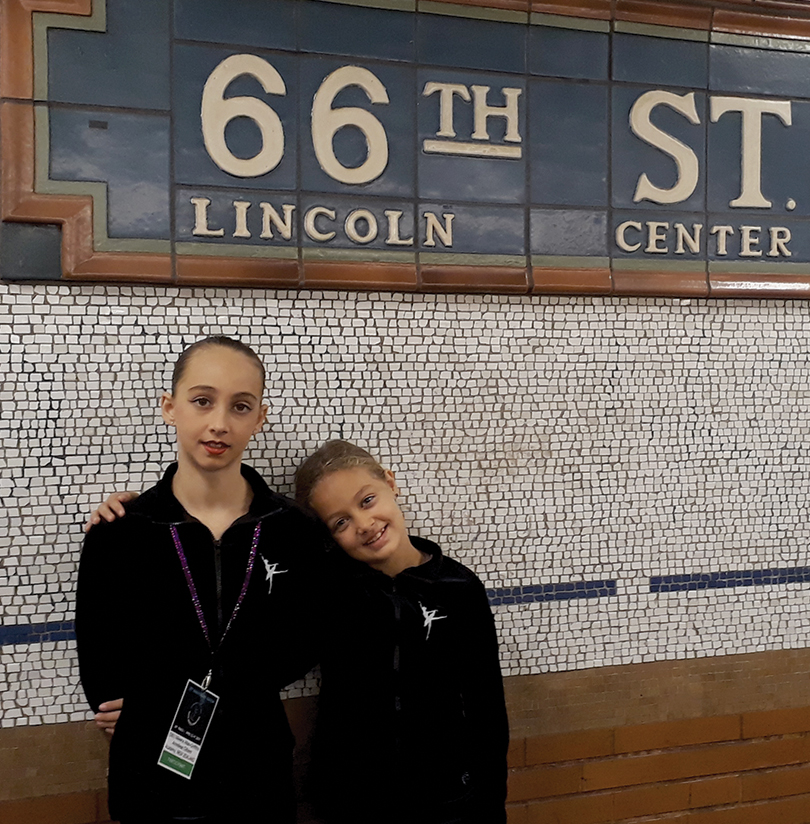 Above: En route to the gala performance at the Lincoln Centre in New York City.

Despite the confidence others had in her ability, Mileena began to struggle. “My first year was hard,” Mileena says. “I used to be terrible on my feet.”

Private lessons helped identify the problem. “Her legs sort of bend backwards,” says Marianne. “Most kids don’t have the hyper-extension and hip-rotation she has. She is also hyper-flexible, so things like the splits are easy.”

In the ballet world this is a good problem to have, but for a young dancer it has taken a huge amount of work and confidence building to manage what Marianne refers to as “a wobbly body”. In the last six months Mileena has been in flips and tumble classes to build strength.

Mileena identifies concentration and control as the two main challenges she faces when dancing. “You need a lot of strength, but a lot of it is mental.”

Arawyn jumps off the couch to demonstrate a turnout, pointing her toe and rotating her leg to a 90 degree angle. In a complete turnout, which is rarely attainable without conditioning, a dancer positions both feet out at 180 degrees, using core support, good pelvic alignment, and muscles that externally rotate the hip. When Mileena’s turnout was tested by a physiotherapist who used to work for a major international dance company, there was some excitement.

“She measured better than some of the girls in the English National Ballet,” Marianne says. This is not common in someone Mileena’s age. “You can have less than that and be a dancer, but to have what Mileena has is amazing. She naturally has what most dancers would dream of having.”

The girls dedicate many hours to dance, but since they are homeschooled, the timetable allows for flexibility in scheduling. “A lot of home-schoolers won’t do activities until 10am, but the girls like to get up and start at six in the morning. They have a list of work they need to get through for the week, like maths, English, and science; and if they get through it in three days, they only have to work for three days.”

There are dance competitions, but Marianne does not put the focus on where the girls place. The focus is more on meeting people, practicing, and improving.

“They have fun at competitions. The kids are really nice and it’s not too competitive,” Marianne says. 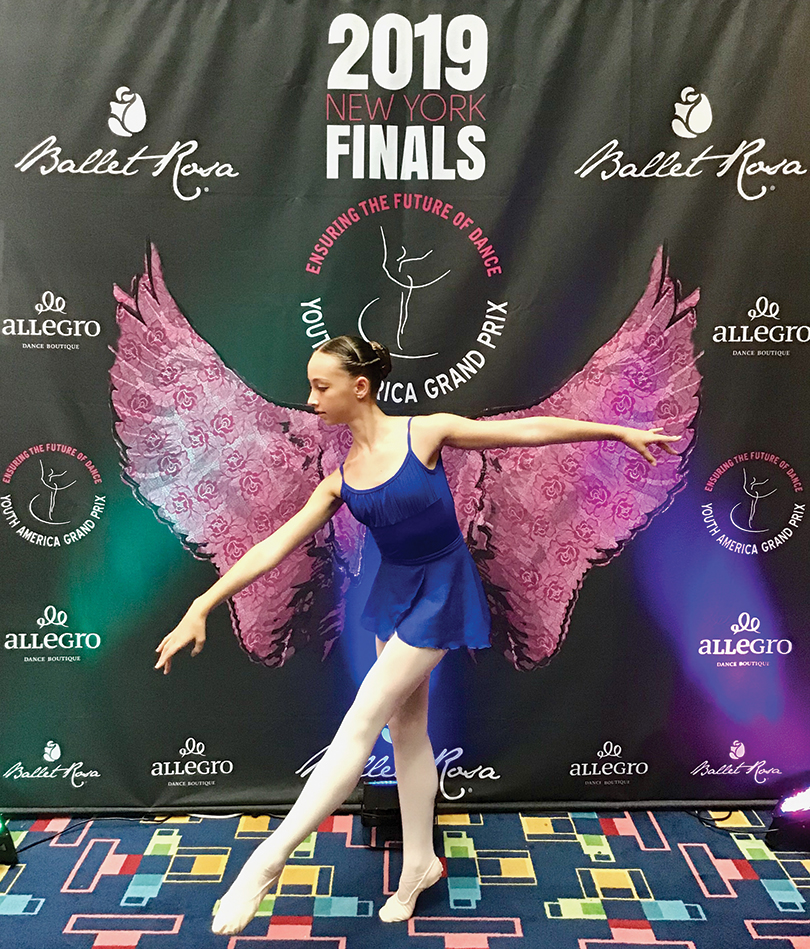 Above: Posing after a master class at the Youth America Grand Prix (YAGP) competition in New York.

Marianne joined kapa haka groups during her intermediate and high school years, and having never studied ballet, often finds herself leaning over to ask Arawyn how well Mileena has danced. “Sometimes I give corrections on Mileena, and sometimes she doesn’t take them,” Arawyn says with a smile. “But I feel happy for her because she works so hard. Every time I watch her dance on stage I see an improvement from last time.”

Mileena identifies concentration and control as the two main challenges she faces when dancing. “You need a lot of strength, but a lot of it is mental.” She appreciates watching the joy Arawyn derives from dancing, and the confidence she has communicating to an audience without words.

“For her it’s stage presence, all that she does up here,” Mileena says, gesturing to her face. Arawyn agrees. “When I’m dancing I feel like the music is moving through me, and I’m beautiful and free.”

Marianne is grateful for the many lessons that come with training to become a world class ballerina. “There’s so much to it: the brain training, the repetition, they have got to have strong enough feet and arms, and also remember the sequence. Life is full of challenges and I want them to keep pushing.”

There are also financial challenges around ballet, but even they present an opportunity for learning. “The girls are involved in every decision around the cost of each activity and planning for their financial future,” says Marianne who credits Whai Rawa with being a great tool when it comes to teaching the girls about saving and compound interest.

“Last Christmas they asked if Santa would put money into their account as part of their main Christmas present.” Mileena wants to buy a house with her sister. Arawyn would like to set up a charity for guide dogs.

But for now, Mileena’s main goal is to continue to master the unique physical gifts that give her an edge as a dancer. Her talent has already been recognised as above her age group by the United States national dance company American Ballet Theatre, and when the girls return to New York to take part in the summer intensive classes this year, Mileena will be bumped up from the two-week programme that Arawyn will be taking, into the five-week programme.

“There is a lot to learn,” says Mileena. “I just feel very excited, happy, and lucky to know my ballet has been improving.”