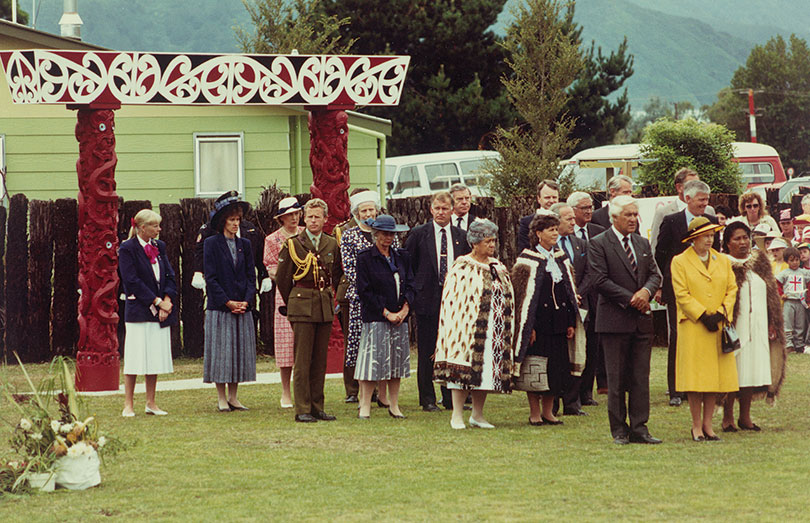 Her Majesty Queen Elizabeth II and her ope, including Governor General Sir Paul Reeves, being welcomed onto Waikawa Marae in 1990.

When Her Majesty Queen Elizabeth II died on 9 September, it drew to a close a reign of more than 70 years over the United Kingdom and Commonwealth – including Aotearoa. She was a symbol of quiet constancy and stability in an ever-changing world, and Tā Tipene O’Regan was honoured to join the New Zealand delegation that travelled to London to attend her funeral. He sits down with kaituhi Anna Brankin to reflect on the funeral and the significant role the monarchy has played in our country, and for our iwi.

“I was very saddened to learn of the Queen’s passing because I respected her mightily,” Tā Tipene says. “She played a crucial role in implementing a much more widespread acceptance of a Treaty-based society.”

When the invitation came to attend her funeral in London, Tā Tipene hesitated only for a moment.

“For an old bloke who increasingly sees himself as beyond being any use, the recognition and acknowledgement was a very great honour,” he says. “My first response was to reach out to Ngāi Tahu and ascertain what the general feeling of the leadership was, and it was hugely positive, for which I was most appreciative.”

Tā Tipene has visited London many times, making the trip several times a year during some periods of his life. These days, however, the logistics of long-haul travel are no longer as straightforward and he was delighted
to have his daughter, Hana O’Regan, accompany him.

I was deeply appreciative of the fact that she took me to London, managed me and saw that I was cared for,” he says. “We were warmly welcomed and cared for both by the Prime Minister and our own Governor-General.

Dame Silvia Cartwright also showed Hana and I the greatest kindness and courtesy, and of course it was a considerable honour to accompany the Māori king, Kīngi Tūheitia.”

When the delegation arrived in London, Tā Tipene was struck by the sense of gravitas and order that permeated the city despite the vast number of people gathering in preparation to farewell their monarch.

“The atmosphere was extraordinary – I have never seen crowds managed so effectively,” he reflects. “London was a wonderfully well-ordered place for that event. It was the biggest thing to have happened in many years, but it was a model of orderly, well-managed behaviour. It was respectful, it was peaceful.”

The delegation stayed at a hotel on the Thames, overlooking Blackfriars Bridge. 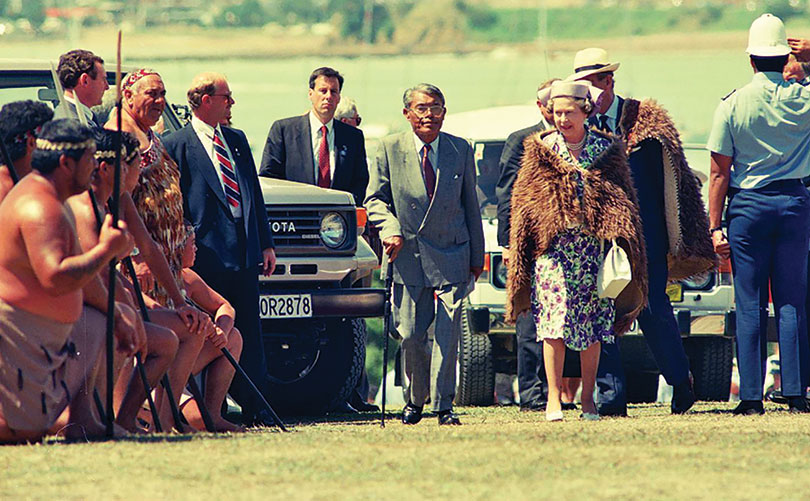 Queen Elizabeth II arrives at the Waitangi Treaty Grounds in 1990.

From his room, Tā Tipene could see the immense queue of mourners as they waited to pay their respects at Westminster Hall.

“The most fascinating thing for me was the movement of the queue, day and night, just nonstop movement of three or four people abreast,” he says. “You could see that queue from space – there were photographs of it in the paper. It was amazing. The whole thing was a testament to her role as one of the most loved figures in our history.”

Even before the honour of attending her funeral, Tā Tipene counts himself as privileged to have met the Queen and other members of the Royal Family on several occasions.

“My experience of the family is that they are highly literate and very well-informed about New Zealand events and constitutional matters,” he says. “Prince Philip was a very interesting man in his own right. I was privileged to escort him on a trip into Fiordland and Rakiura over a period of a week or more. I had a meeting with him subsequently in London, and I treasure the book that he gave me with his inscription.”

With regards to the Queen, Tā Tipene describes her “exquisite courtesy” and says she was always a firm advocate for the rights of iwi. “She was meticulous in her observances of the constitutional proprieties and had a profound understanding of our history,”
he says, referring to two specific occasions on her 1990 visit to Aotearoa in which she made a quiet but significant contribution to our national understanding of Te Tiriti o Waitangi. 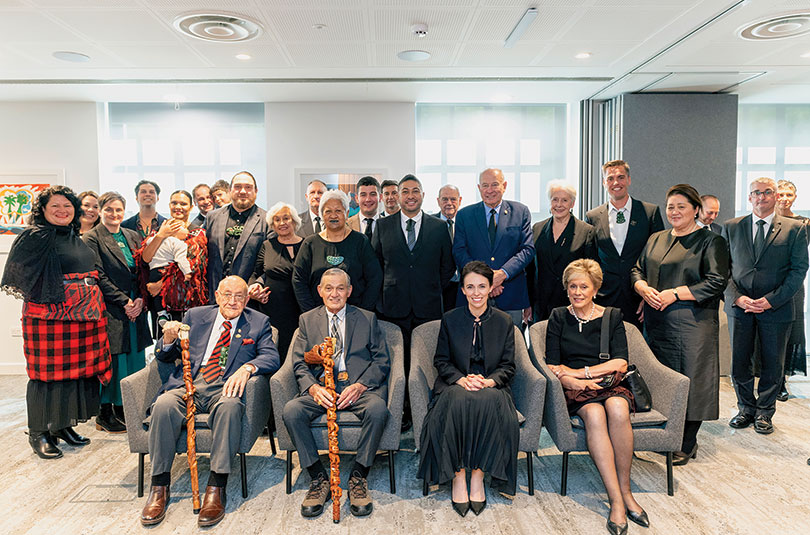 The first was at Waitangi, when the Queen attended commemorations for the 150th anniversary of the signing of Te Tiriti o Waitangi. “In her address, she quite simply and succinctly made the observation that the Treaty had, of course, been ‘imperfectly observed,’” Tā Tipene says. “The national atmosphere at this time was quite bad, with the media on television suggesting that iwi pursuing settlements were depriving elderly ladies of their perfectly properly acquired real estate and homes, so it was extraordinarily significant for our monarch to acknowledge the role her institution had played in the whole thing.”

The following week, the royal tour took the Queen to Waikawa Marae near Picton, where the Governor-General was to deliver an address on her behalf. As the first Māori to hold the role, Sir Paul Reeves was determined that this address would make a difference
and turned to Tā Tipene to help him write it.

“At the time, we were having a row about the Treaty and Hobson’s use of declared sovereignty on the basis of a right of discovery,” says Tā Tipene.

As Ngāi Tahu entered into negotiations with the Crown, there was an increasingly popular view that Te Tiriti o Waitangi did not apply in Te Waipounamu. The argument was that British sovereignty over the South Island was attained when William Hobson, the first governor of New Zealand, proclaimed it by right of discovery.

The right of discovery is a principle of international law, which gives a nation the right to claim any unoccupied territory they discover. Despite the fact that Te Waipounamu was undoubtedly occupied when British explorers first arrived, Hobson was later prompted to declare sovereignty to deter French settlers at Akaroa from making their own claim.

The argument was of the utmost importance to all South Island iwi, including Ngāi Tahu. If Te Tiriti did not apply in Te Waipounamu, then there would be no avenue for iwi to pursue recourse through the Waitangi Tribunal – no Treaty claims, no settlement and no apology from the Crown.

Tā Tipene saw the opportunity to use the Queen’s speech to address the matter.

“I drafted a speech to propose to the Queen, which Sir Paul duly sent to London and we received the original one back with ‘approved’ and her initials at the bottom,” Tā Tipene chuckles. “And on the day, Sir Paul stood up on her behalf and she handed that speech to him and he spoke about the fact that the Treaty was signed in Te Waipounamu at four locations, at which point the island became subject to the sovereignty of Queen Victoria on the basis of a properly ordered cession and NOT on the basis of right of discovery.” 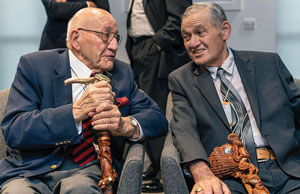 The significance of this cannot be underestimated – the then monarch’s acknowledgement that Te Tiriti o Waitangi did, in fact, apply across Te Waipounamu.

“We owe a particular debt to her for that.

The whole debate disappeared off the agenda and no one remembers it now, although it was a fundamental argument at the time,” Tā Tipene says. “Both at Waitangi and Waikawa, she knew exactly what she was doing and without her input things could have gone very differently.”

The ability to exercise this subtle influence is one of the many reasons Tā Tipene continues to support New Zealand’s constitutional monarchy.

“I see a lot of merit in the present arrangements. The attraction of a constitutional monarchy is its permanence, insofar as anything is permanent, while the monarch maintains a relatively apolitical role,” he says. “The alternative is a democratic process resulting in an ever-changing president or head of state and no sense of continuity.”

When it comes to the concept of the inherited title, Tā Tipene has an insightful perspective, influenced by his personal observations of the Royal Family. “I know a lot of people have objections to the idea that monarchs inherit their titles rather than earn them, so to speak,” he says. “Well, they might inherit them but they are brought up to do so. By the time they come to the throne they have a highly rarefied education and a thorough understanding of their duties and responsibilities.”

This, he points out, places them in far greater stead than many leaders who earn their position through democratic elections – a fact that is demonstrated by the loyalty and love the Queen earned, and the shock wave her death sent throughout the world.

On the day of her funeral, Tā Tipene was seated in Westminster Abbey alongside the New Zealand delegation and 2,000 mourners from across the world.

“Being in that extraordinary building again, of such antiquity, I wondered how on earth they carved that stone, how on earth they erected those pillars,” Tā Tipene says. “I just sat there and ruminated over those things, which are themselves a symbol of the continuity we’ve just been talking about.

“I was thrilled and happy to have been there – just as I was when I stood before the Lincoln Memorial in Washington, and just as I am when I look at Motupōhue – Bluff Hill.”