Wānaka’s Festival of Colour brings together a diverse spectrum of speakers, musicians, performing arts groups, and artists across a range of venues over 10 days and nights. Against a backdrop of autumnal oranges and reds, the festival, now in its 16th year, brings a warmth and vibrancy to the growing lakeside town as the temperature drops and daylight hours shorten. Kaituhi James Harding was in Wānaka to indulge in the festival delights. 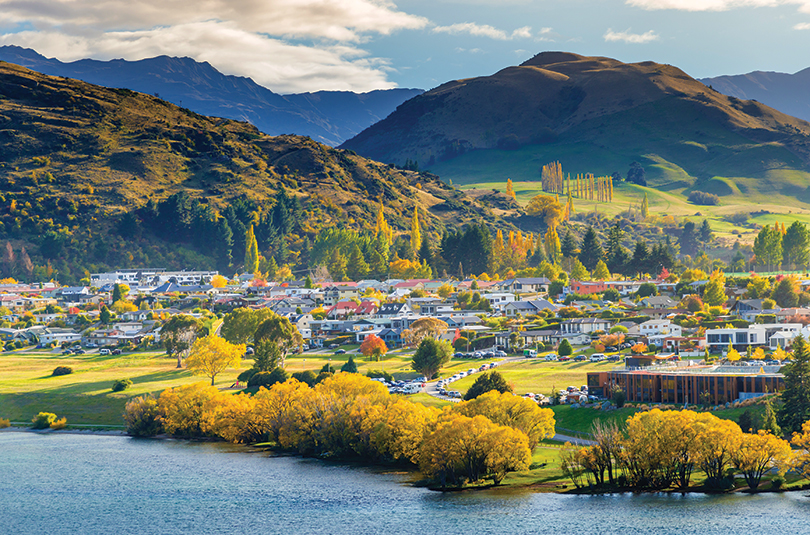 This year’s festival featured an impressive selection of Aotearoa-based performers including Estère, Lou’Ana, Nadia Reid, Lawrence Arabia, Reb Fountain, and Finn Andrews (of acclaimed London-by-way-of-Auckland indie band, The Veils). The local line-up was complemented by international acts including Icelandic singer Jófríður Ákadóttir, legendary Catalan baroque musician Jordi Savall, and Canadian minstrels Tequila Mockingbird Orchestra. A scan through these names gives you a good idea of the calibre of the festival programme – and that’s just the musicians.

Also in the lineup were dances by the Royal New Zealand Ballet and the New Zealand Dance Academy, theatre performances, panel discussions on wide-ranging kaupapa, and even a programme for tamariki. 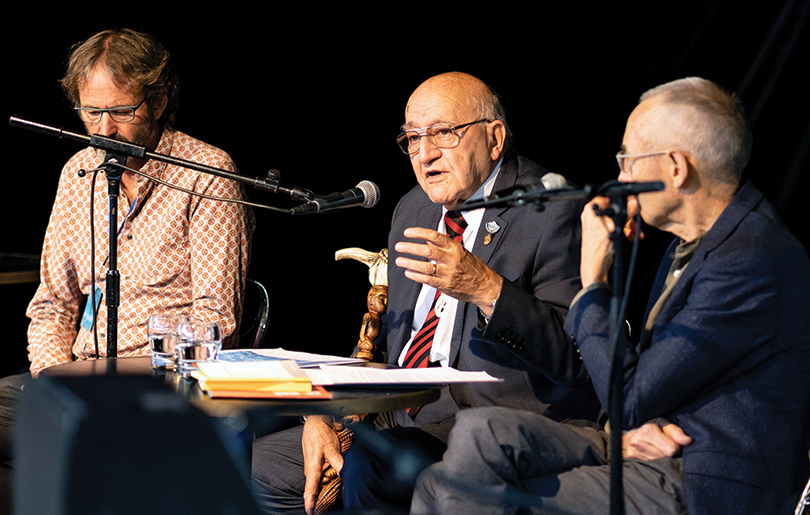 Such a contentious topic was sure to generate some lively debate and discussion, and this was certainly the case both on and off the stage. When Dr Joy posited that dairy farmers could potentially be operating more efficiently and generating more profit by decreasing their stock numbers, an irate farmer sitting next to me muttered an expletive under his breath and looked ready to enter the debate himself. Thankfully, he left it to those with the microphones.

Tā Tipene, who is always good for a one-liner or four, had some wise considerations on the kaupapa. He mused about the irony of shipping milk powder offshore.

“The silliest thing I can imagine doing, is taking 40 litres of water and generating one litre of milk, then taking the remaining water from that litre and reducing it down to powder to ship overseas for someone else to add their dirty water to …”

While there were clearly some opposing positions, it was also clear that the three panelists were in agreement that urgent action is required to combat our growing water crisis.

After the panel wrapped up, with the issue of water firmly front of mind, it seemed like a good time to wander over to the Lake Wānaka Centre and take in the Wai Water Wānaka exhibition. I made my way around the small space, including an anchor piece from acclaimed Ngāi Tahu artist Professor Ross Hemera, alongside works by Jacqui Colley, Euan Macleod, Elizabeth Thomson, and more.

According to the programme, the exhibition looked to highlight “water as a source and as a natural resource”, and all the work centred on the cultural, spiritual, and physical significance of wai in Aotearoa. One particularly engaging piece was Water Table by Campbell Burns, which was quite literally an old school desk adorned with graffiti that when touched emitted loud water noises. It was a feature that startled at least one unsuspecting patron who accidentally put their bag on it, not realising it was in fact part of the exhibition.

The exhibition centred around Professor Hemera’s installation Hue Wai, an abstract sculpture depicting five of the major rivers of Te Waipounamu – Waimakariri, Rakaia, Rangitata, Waitaki, and Mata-au. Each river is presented in the form of a length of plastic piping, spread out on the floor and adorned with the stylised symbols that typify Hemera’s work – symbols that are inspired by those found in traditional Ngāi Tahu rock art. Each length of pipe is tethered to a stone found in its own riverbed and holds a vial of water from the awa. With this juxtaposition of the ancient and the modern, the natural and the artificial, Hue Wai gestures to the distant past, while looking to the future of freshwater in Aotearoa. 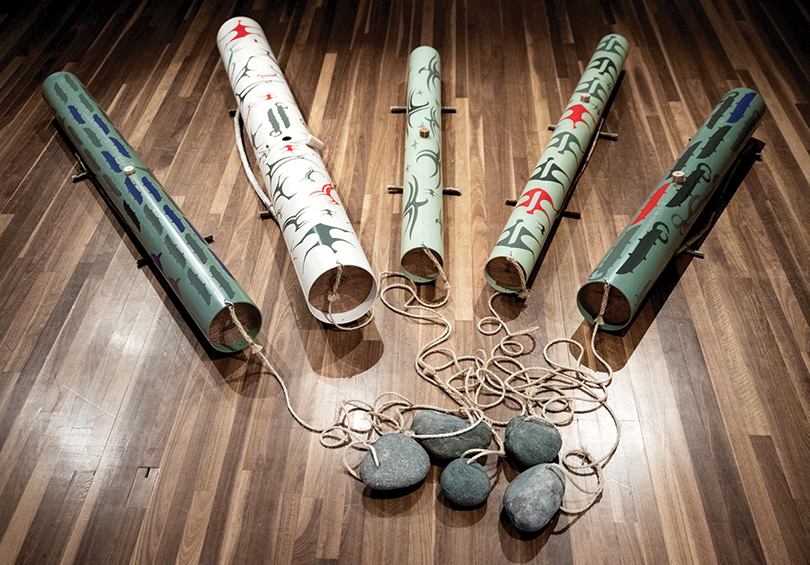 The following night I returned to the Lake Wānaka Centre, for a performance of Wild Dogs Under My Skirt. The curtains opened on a bare stage, adorned by nothing but six chairs, a machete, and a large can of corned beef. It was clear from the outset that I was about to witness a performance the likes of which I had never seen before. Directed by Anapela Polata’ivao, the play is adapted from poet and writer Tusiata Avia’s challenging poetry collection of the same name. It features just six actresses, who slowly assume their positions as lead Stacey Leilua delivers a stark monologue focused on the minutiae of Pasifika culture, and in particular the ubiquity of corned beef.

The performers take the packed auditorium on an extremely personal journey of what it means to be Pasifika growing up in Aotearoa, and the sometimes painful cultural collision that comes with it. The disarming quality of the play lies in its ability to have the audience laughing (albeit uncomfortably at times) in one breath, and aghast in the next, as the dialogue shifts rapidly from themes of what it might be like to sleep with a white man, to ruminations on sexual violence. To say much more would spoil the spontaneous nature of the play, save to say that as the play reaches its crescendo, the sense of catharsis on stage is palpable, and the audience was left to pick up our collective jaws.

After a quick dinner spent reflecting on what I had just experienced, it was over the road to the Pacific Crystal Palace, a large marquee near the lakefront, for a performance by The Māori Sidesteps. I entered another full house, and managed to steal one of the few remaining seats.

It’s little wonder that the popularity of Wānaka as a destination in Te Waipounamu continues to grow. It was particularly fantastic to see Ngāi Tahu represented by our rangatira Tā Tipene O’Regan and ringatoi Ross Hemera. In the coming years it would be great to see Ngāi Tahu history and narratives embedded further into this annual event.

The Māori Sidesteps describe themselves as an entertainment company specialising in live and multimedia entertainment, and in this live context they bring their unique and modern take on the classic Māori showband format. From the opening skit of their show, complete with a good dose of audience interaction, it’s clear we are in for a good laugh.

The four-piece are an accomplished ensemble both on stage and on the big screen. De-facto band leader Jamie McCaskill will be well known to Shortland Street fans, while Cohen Holloway popped up in Hunt for the Wilderpeople and the television black comedy show Fresh Eggs, and Erroll Anderson appeared in science fiction film, Ghost in the Shell. “New addition” Regan Taylor made his name in Lee Tamahori’s celebrated film, Mahana. Stylistically the quartet’s approach harks back to the showband feel of Prince Tui Teka and the Howard Morrison Quartet. They even incorporated a hat-tip snippet of “My OId Man’s an All Black” (the Howard Morrison Quartet’s take on the Lonnie Donegan skiffle classic, “My Old Man’s a Dustman”), into their repertoire, complete with their best impersonation of the late Sir Howard’s unmistakably mellifluous tone.

While recalling bands of yesteryear, the group are by no means an oldies act, and they bring a fresh and edgy flavour to their humour in all the right ways, as well as incorporating plenty of on-point references. Their skill is punctuated by their ability to deliver this mix of old and new while not alienating the predominantly older audience at any point, and all their jokes manage to land. Aside from the laughs they are a musically gifted bunch, punching out rich harmonies, accompanied by McCaskill’s accomplished guitar playing.

After a well-deserved standing ovation, the quartet seem to be momentarily caught off guard by an impromptu haka performed by two audience members. After briefly leaving the stage to rapturous applause, it seems only fitting that the troubadours return for a waiata tautoko to cap off a sensational evening of laughter, music, and a good measure of considered and thought-provoking commentary.

I walked out into the cool night air with a real sense of satisfaction at the double-header of performances I had witnessed that evening. The Festival of Colour manages to successfully bring together a spectrum of acts, not just from all over the globe, but from all over the performing arts landscape. With events of this calibre, it’s little wonder that the popularity of Wānaka as a destination in Te Waipounamu continues to grow. It was particularly fantastic to see Ngāi Tahu represented by our rangatira Tā Tipene O’Regan and ringatoi Ross Hemera. In the coming years it would be great to see Ngāi Tahu history and narratives embedded further into this annual event.