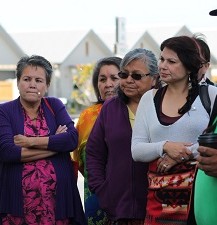 Among the rush of groups visiting Te Runanga o Ngai Tahu at the end of the year was a study group from Blue Quills College led by Doctor Marilyn Shirt, Dean of Indigenous Languages. The group was here to study Maori education and language programs and to meet local iwi in the spirit of cultural exchange and relationship building.

Blue Quills First Nations College in Alberta, Canada, is located at an old residential school site built  in the 1800s. Many residential schools were built by the Canadian government in partnership with church groups with the intention Christianising and “taking the Indian out of the child”.  Many of these boarding schools were situated some distance from the reserves and children often did not see their families until the age of sixteen when they left the school.

Blue Quill, one of four chiefs who banded together to form Saddle Lake, invited the government and the churches to build on the reserve so that the children of Saddle Lake would not be so far from their families, and because he foresaw a time when when “kipimācihonāw ka-wehcasin.  Kinehiyāwewināwāw wī-āyiman ka-miciminamihk”  (Earning a living will be easy.  Being Cree will be hard to hold).

In 1970 First Nation people took control control of the school which is now governed by seven local First Nations Reserves.  Today the education centre is staffed by a dedicated group of people who mostly originate from the very reserves the school once targeted for assimilation. Some were victims of the old residential schools assimilation program, all are committed to regaining the cultural health and well-being, identity and language the original school was designed to destroy.

Blue Quills provides a wide range of educational opportunities for people of all cultures.  In 1998, Blue Quills initiated the Leadership and Management Program founded on a cultural paradigm. This program was the first degree offered by an independent indigenous institution in the province of Alberta, and is transferable to mainstream institutions in the region.

In 2002, Blue Quills initiated a doctoral program in iyiniw pimatisiwin kiskeyitamowin, as an act of sovereignty.  The graduates of this program have been acknowledged and accepted to teach at major public universities. In 2011, Blue Quills launched a Bachelor of Art in Cree and a Masters’ degree in Indigenous Languages.