For the love of her iwi

Koa Mantell has worn many hats over her 72 years, describing every one of them as amazing. A recent move to Ōtautahi marks the beginning of her reluctant retirement, and provides an opportunity to reflect on a career characterised by a passion for her iwi – from Ngāi Tahu history and arts, to improved health and social outcomes for all whānau members. Nā Anna Brankin. 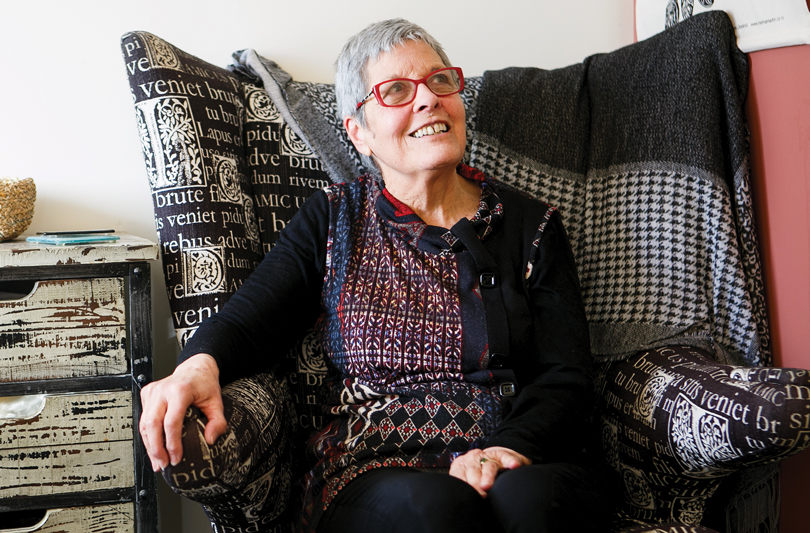 “I think I just enjoyed the things that I did because they were Māori-focused, Ngāi Tahu focused,” Koa says reflectively. “I have always felt that connection to Ngāi Tahu because of my dad. He was a really neat man, and a wonderful father, and he and my mother always encouraged us in that way.”

The youngest of three children, Koa spent most of her childhood in Ōtepoti, but from an early age she knew where she came from. “We always called Moeraki home, because my father was born there,” she says. “Any time we had free, weekends and holidays, we’d go up to Moeraki.” This connection has endured and remains strong to the present day.

After Koa left school she began working at the University of Otago Faculty of Dentistry, working her way up to senior nurse in the orthodontics unit over the course of a decade. “But then, as with most things, you sort of get over it after a while and start looking for something new,” she says, summarising a pattern of seeking new challenges that has been a defining feature of her life.

As a member of the Otago Māori Women’s Welfare League, Koa had forged strong friendships with many of the local kaumātua. She laughingly tells me that there was a certain tone of voice used by the aunties when they began a conversation with an appraising, “Oh, hello dear.” It was almost always followed by a piece of strongly-worded advice, or a favour she very quickly learned to agree to.

In one instance it was Aunty Magda Wallscott, Irihāpeti Murchie, and Emma Groubey who encouraged Koa to enrol at university and complete a certificate in social work, a move that marked the beginning of a long career in Māori health and wellbeing.

In 1983, Koa spotted a job listing for a Mātua Whāngai officer at the Department of Māori Affairs, a job she coveted but didn’t believe she was qualified for. “But then I had five phone calls from around the community saying, ‘You’re going to apply for this, aren’t you?’”
she laughs.

She took a chance, and flew up to Ōtautahi for an interview. “I always remember this interview because it was absolutely amazing,” she laughs. “I walked into the room and there were two of our kaumātua, Riki Ellison and Joe Karetai. I think I only answered one of the interviewer’s questions, and they answered the rest. And in the end they said, ‘Well, are you going to give her a car?’

“It was thanks to them I got that job, and that’s when I really got involved in the community, and it was neat.”

In 1986 Koa’s life changed direction again, this time courtesy of the lodgement of Te Kerēme – the Ngāi Tahu Claim. “I’ll tell you an interesting story,” she says. “You hear about these things and you don’t always believe them, but this actually happened to me. I was going to every treaty claim meeting that Ngāi Tahu had back then. And somehow it got back to the Minister of Māori Affairs, and down came an announcement from Wellington that anyone working for Māori Affairs was not to go to any of the claim meetings.

“What are you meant to do?” she continues. “Well, I went to all my aunties, and I don’t know what they did, but I was rarely bothered after that – even though I kept going to all the meetings.”

In 1986 the chairperson of the Ngāi Tahu Māori Trust Board approached Koa and offered her a job she couldn’t refuse. “I was to lead a group of four students to prepare a submission on the Royal Commission on Social Policy,” she explains. “It was the most amazing time of my life, but it was so busy. We had 55 hui in 10 weeks, travelling throughout the South Island; as well as writing the submission.”

Following this, Koa began working for the iwi as a rūnanga development officer, before being appointed as the Manager of Social Development for the newly-formed Te Rūnanga o Ngāi Tahu in 1992.

A stand-out memory from this time was working with the Whakapapa Unit to register iwi members, in a move to progress settlement negotiations. “This was when we were gearing up for settlement, and we needed to know how many Ngāi Tahu there were,” she recalls. “The Crown told us that Ngāi Tahu had a population of 8000. We knew that number was not correct, so we decided to get on the road and identify all the Ngāi Tahu whānau we could find.”

Koa and her team travelled around Te Waipounamu, travelling to every marae and registering as many Ngāi Tahu whānau members as they could find. The work was of the utmost importance, as at this stage the Crown was operating under a needs-based approach which would calculate the value of settlement based on the estimated population of Ngāi Tahu. “It was huge! We ended up with a count of 27,000, when a census around the same time got to 26,000,” Koa remembers. “We were dead right on which was tremendous; we were so pleased with ourselves.” Koa relished the challenge of working with various government departments, identifying allies in Māori staff who worked for the government who would help her team come up with the best way to work around the rules without breaking them.

“From time to time we also undertook research to learn more about Ngāi Tahu whānui – who they were, what they did,” she says. “To do this work we invited a member from each area represented on Te Rūnanga o Ngāi Tahu. We also organised a strategic planning group, and it was through this that the social development of the tribe really began.” Throughout it all, Koa fuelled her indomitable enthusiasm by maintaining close connections with the Papatipu Rūnanga, drawing motivation from the flax roots passion and dedication to the iwi that she witnessed. “One of the things I noticed very early on was that whenever we had a meeting, no matter where it was, someone there would have travelled 10 hours to get to it, there and back,” she says. “So if there was a meeting at any of the marae, I would say to myself, ‘Would I go to this if I lived closer?’ And if the answer was ‘yes’, then I would go anyway.

“I just loved it; it was the tribe, it was the people. It was very demanding – often in those positions, everybody wants a bit of you, and it’s like you belong to the tribe,” she says. “Sometimes it would become too much, and at times like that I’d go back to the rūnanga and get my sustenance from there.”

In 1996 Koa left her role at Te Rūnanga o Ngāi Tahu and returned to Moeraki for some of that sustenance, as the iwi was undergoing what she describes as a “changing of the guard.”

“I worked for the rūnanga for about a year, and then this wonderful job came up in Dunedin, as the kaihautū for Arai-te-Uru Waka Hauora,” she says. “We worked from a bus, travelling from Dunedin right around Otago and Southland, providing health services and health promotion to the Māori community.”

Koa remained in this role until 2003, before moving on to yet another challenge that encompassed another of her passions – the arts. She served on the iwi development board for Mā Tātou, the Ngāi Tahu exhibition run by Te Papa. “It was one of the better things I’ve ever done, actually,” she reflects. “It was the chance to tell our stories, for us to be involved right from the very beginning, and to decide what works to share and stories to tell.”

During this time she also served for three years as the Moeraki Rūnanga representative before resigning from this position. In more recent years Koa has been working part-time as a guide at Te Ana Māori Rock Art Centre in Timaru.

“I remember when that business first started up, they came down to Moeraki looking for funding,” she says. “I happened to be kaiwhakahaere at Moeraki at the time and I can remember thinking, ‘This is so important, it has got to go ahead.’

“The rock art has always been very special to me,” Koa explains, showing me a tāniko she has woven featuring one of the distinctive bird forms. “When Māori and particularly Ngāi Tahu came into the centre I loved showing them around, because suddenly you could see them understanding and growing right in front of you.”

Koa has also travelled to Thailand as part of a conference on community work, and to Las Vegas to receive an award for her writing at the International Society of Poets Symposium. As well as this, she owned and operated an art gallery in her home town of Moeraki for a time. In 2007 she was made a member of the New Zealand Order of Merit in recognition of her services to the community.

This consciousness of her parents’ influence informs the one piece of advice she has to offer for the future of the iwi. “Don’t forget the past,” she says. “Never forget it, because it’s the past that makes us what we are today.”