From hook to plate

Bluff fisherman Nate Smith is on a mission to change the face of commercial fishing in the deep south. A third-generation Ngāi Tahu fisherman, Nate is the owner/operator of Gravity Fishing, and has made a brave personal commitment to return to sustainable fishing practices in a bid to preserve precious southern fish stocks.
Kaituhi Rob Tipa reports. 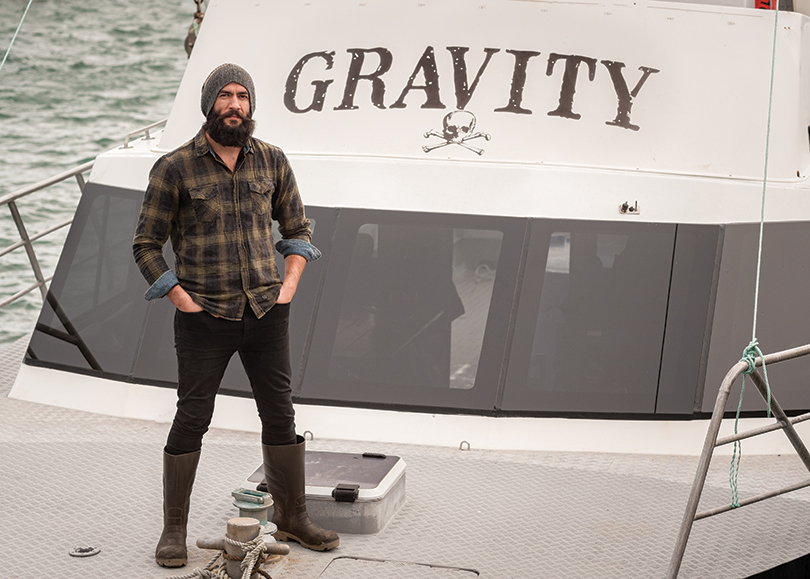 Above: Nate Smith on board his boat Gravity.

In July last year, Gravity Fishing switched from the bulk harvesting techniques that are in common use by the fishing industry to a more traditional style of fishing with hook and line. Nate specifically targets a handful of fish species, and takes only what his customers have pre-ordered.

Gravity Fishing’s annual catch has dropped from 50 tonnes to eight tonnes of fish. However, Nate’s financial returns have actually improved, through cutting running costs and taking control of all aspects of catching, packing, and marketing a range of premium quality whole fish through the company’s own processing facility.

In the last 12 months, Gravity Fishing has developed a growing domestic market, supplying whole fish to chefs in some of the country’s leading restaurants, vineyards, and lodges.

Business has been so successful, Nate now sees an opportunity to recruit other southern fishermen.

He started fishing as a teenager, working as a deckhand on fishing boats operating out of Bluff and Rakiura. He learnt the art of fishing with hook and line from his father, who used to catch whole fish for his late father-in-law’s fish factory in Bluff.

After completing his skipper’s ticket, Nate went straight into seismic survey for the oil and gas industry, work that took him all around the world; mainly the Middle East, Western Australia, and the west coast of the North Island.

“I decided to get back into the fishing industry because that was where I was always destined to be,” he says. “My father, grandfather, uncles, and cousins were fishermen, so I was always going to come back to it.”

Nate went fishing commercially for Sanford for 11 years, initially leasing a few boats. In November 2014, he bought the 17-metre alloy vessel Gravity in Australia, modified it for fishing on the southern coast, and went to work catching blue cod and crayfish quota for Sanford.

In little more than a decade, he noticed a significant decline in blue cod catches in particular, and began to question the sustainability of using cod pots for bulk harvesting the species.

“When we first started fishing we were averaging 700–800kg of blue cod a day, and the last season we did with cod pots we were down to an average of 300kg. In that time I’d seen the decline, and I just knew there was a real problem.”

Last year was a prime example, he says.

The fishing industry has a Total Allowable Catch (TAC) of 1239 tonnes of blue cod, and last season was under-caught by 304 tonnes. Although the Ministry of Fisheries took steps to fix that by changing the mesh size of cod pots to harvest only larger fish, smaller fish were still being caught. 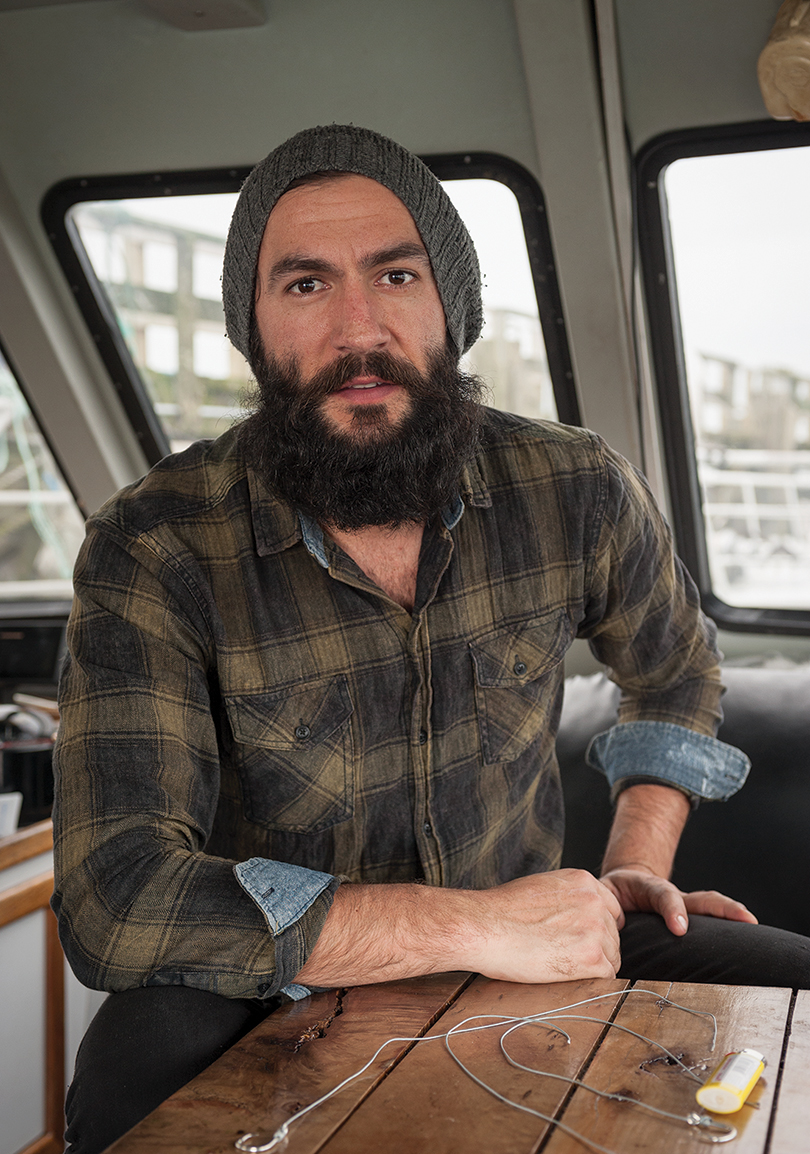 Above: Nate Smith with the simple hook-and-line he uses to catch fish.

Nate regards blue cod as an iconic native species, not found anywhere else in the world. The pristine waters, tidal flow, and nutrients in the waters he fishes – Area 5 between Slope Point on the Catlins coast and Awarua Point north of Milford Sound – all contribute to what he believes is the best quality blue cod in New Zealand.

Historically, fisheries in the “Roaring Forties” (the areas between latitudes 40° and 50° in the Southern Hemisphere) were protected from over-fishing by this region’s legendary strong winds and tides. But with bigger boats and modern technologies, Nate says these fisheries don’t get a rest any more.

“The people who came before us were using the right methods and were fishing in the right way,” he says. He remembers his grandfather catching blue cod on hook and line around the coast of Rakiura. “But we got too smart and used too much technology to look after the resource.”

Rather than contributing to the problem by continuing to use cod pots, Nate took declining catches personally and decided to do something about it.

After much research, trial and error, he converted Gravity to hook and line jig fishing, only catching and supplying pre-ordered species of fish, while reducing pressure on the precious blue cod fishery.

“For me it’s personal. I’ve seen the enthusiasm of my own son catching a blue cod for the first time, like I’ve experienced myself. When I saw that I thought, ‘How can we preserve this?’”
Nate Smith, Ngāi Tahu

As Nate explains, financial gain has never been a major driver for him. He reckons sustainability is the biggest issue facing the fishing industry right now.

“We’re only ever putting a small number of hooks in the water at any one time and we’re only ever taking what we need, which is what has been pre-ordered. We may catch that in an hour of fishing on a Monday morning, and then we come home.”

One of Nate’s North American customers is a restaurant owner who used to grade fish in Japan. He gave Nate some invaluable advice about when certain species of fish have the best oil and fat content. Gravity Fishing used this information to present its customers with a calendar detailing when particular species of fish were in season, and when they could expect to offer each fish on their menus.

For example, during May and June Gravity targeted hāpuka (groper), because they were in the best condition they were likely to be in for the next 12 months. By the end of June they moved on to blue cod, striped trumpeter and octopus for the winter months.

In the summer months they target kingfish and albacore tuna, a migratory species.

“Every kilogram of another species of fish that we catch takes the pressure off the blue cod fishery, which is the species we are trying to look after,” Nate explains. 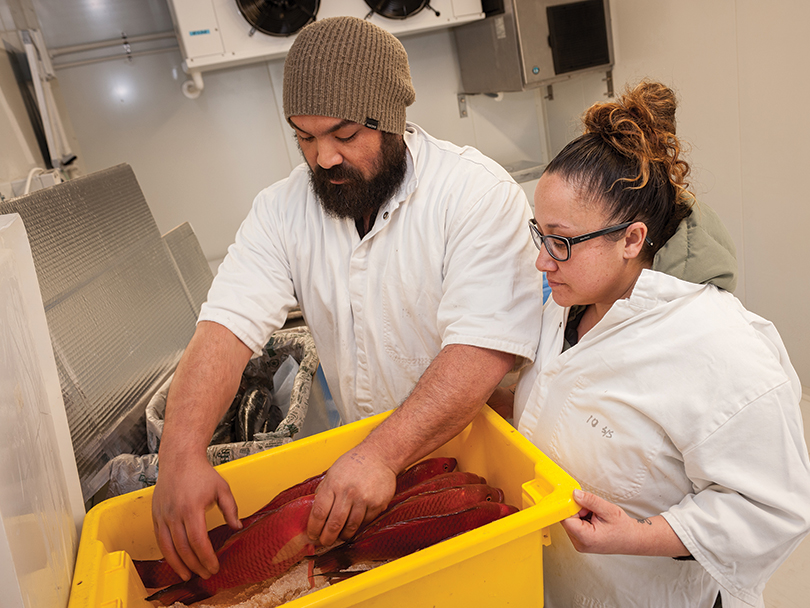 Gravity Fishing uses the Japanese method of ikijime to instantly kill the fish humanely as soon as it is landed. The fish is dropped into an ice slurry to lower the body temperature quickly.

This process returns the blood to the gut cavity so the fish’s flavour is not soured by lactic acid. It also slows rigor mortis by five or six days, and gives some fish species a shelf life of up to nine days.

Nate says their first 12 months of sustainable fishing has given the pair a good gauge on what the New Zealand market can absorb at the high-end level.

With a large and expanding customer base, they are talking to other fishers from Bluff and Rakiura who share their concerns about declining catches, and want to do something about it by adopting similar sustainable fishing practices.

Nate would like to see more fishers involved, to maintain a consistent supply to existing domestic markets and to meet demand for export orders. The company is currently working on certification to supply customers in Australia.

“I’d like to see these methods used throughout New Zealand,” he says. “I’d like to see every fisherman doing what we’re doing, because financially they’d be better off, there would be less pressure on the fishery, less wear and tear on gear, and less effort.

“If everyone was doing what we’re doing, I would say we would probably only harvest half of the total allowable catch of 1239 tonnes. That has got to go some way to looking after the fishery.

“That’s sustainable, that’s looking after a fishery first and foremost; and if you can achieve that and start to see stock numbers come back, that’s when we can say, we did the right thing there.”

Nate believes such changes would have an instant effect on blue cod fishery stocks in particular.

“Within 12 months you would start to see huge numbers of blue cod biomass, the way it used to be. If we want to continue to eat fish in future, it’s a logical step.

“For me it’s personal. I’ve seen the enthusiasm of my own son catching a blue cod for the first time, like I’ve experienced myself. When I saw that I thought, ‘How can we preserve this?’”