From Murihiku to PyeongChang – the journey of an Olympic doctor

Nat Anglem (Ngāi Tahu, Ngāi Te Ruahikihiki, Ngāti Māmoe, Waitaha) takes great pride in the dual roles he holds in the Winter Olympic programme for Aotearoa. As the team doctor, he is responsible for the health and well-being of athletes as they compete in the demanding and often dangerous arena of Olympic disciplines. He is also the team’s cultural advisor, responsible for an essential aspect of the programme that unites the athletes and connects them back to Aotearoa. This includes overseeing an important ceremony that centres around Ngāi Tahu Pounamu. Kaituhituhi Sampson Karst reports. 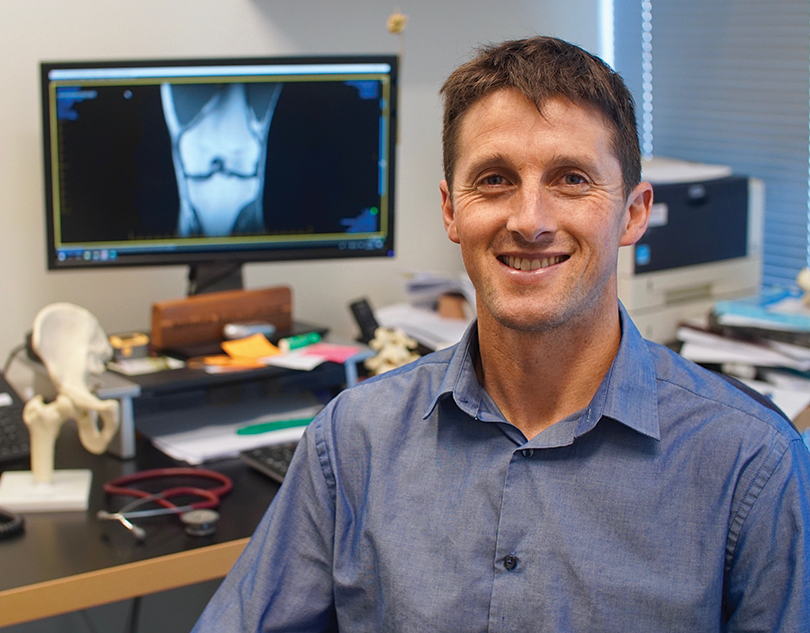 Nat Anglem grew up in Invercargill, proud of his Ngāi Tahu heritage and the connection his whānau had to Murihiku Marae, and after it was built, Te Rau Aroha Marae in Awarua. His journey to learn te reo Māori began during his years at James Hargest College, although he describes it as “a bit of a battle” because it was not part of the curriculum. He persevered and reached a compromise with his teachers: in lieu of art, metalwork, and woodwork options, he was allowed to study via correspondence. “I went with one other student and we spent two self-directed learning hours every week, essentially educating ourselves in Māori.” Nat was not discouraged by this arrangement, and even gained enough confidence to enter the Ngā Manu Kōrero speech competition. He excelled at the Southern regionals, earning a spot to compete at the nationals.

Despite a healthy interest in his Māori culture, Nat’s overriding passion was sport. “It was my world. I mainly played cricket and soccer, but I was always running or biking,” he says. “I found my way into rugby and spent hours playing bull rush – it was all I wanted to do.”

This trend continued through high school, and when it came time to look towards tertiary study and his future career, he knew sport would play a key part in his decision-making. He entertained several tertiary study options including physiotherapy and physical education before receiving advice from his father. “My dad sensed that I wanted to work in sport so he encouraged me to look seriously at becoming a doctor – a career path that would offer me a broad opportunity to work in health and sports.”

With this path mapped out, Nat gained entrance to medical school after completing his first year of health sciences at the University of Otago. Playing top level sports afforded him some freedom in his early years of study, but eventually advice from an older student about the commitments required of a medical student forced him to make some hard decisions. “I was playing cricket for Southland and had been incorporated into the Otago squad when I was offered an ultimatum – sport or medicine.” Nat admits that it was frustrating to walk away from cricket just as it was gaining momentum, but he wasn’t willing to stray from the path his whānau had helped guide him to.

Committing to his studies paid off in the long-term. Nat was able to complete medical school and find a position at Southland Hospital. Completing a fellowship in sports medicine was another five-year commitment, but also the realisation of the goal he had set all those years ago at high school. He continued to follow his passion and took positions in Christchurch and Wellington, and with the Australian Institute of Sport, working with sports teams across multiple disciplines. In 2005 he began working with New Zealand’s winter performance programme, because it tied in with another sporting pursuit that had caught his attention.

“I had put a hold on cricket and took up skiing,” Nat says with a smile. “After a while I decided I would love to compete at the Olympics!”

As is fitting of Nat’s character, he dedicated himself to his new goal of Olympic qualification in cross-country skiing. He represented New Zealand at the world championships and world cup events. His efforts won him a spot on the long-list for the Vancouver Winter Olympics in 2010, but he missed out due to qualifying criteria in the months leading into the Games. Nat continued working with the winter programme – this time with High Performance Sport New Zealand. He eventually found his way to the 2014 Sochi Winter Olympics as the team doctor.

“I’ve had a long relationship with the Winter Olympic group, and it was nice to have my sport and my work blend together,” he says. While preparing for the games and familiarising himself with the team, Nat was informed that they would be departing New Zealand without a cultural ambassador. The role had been held by individuals of significant mana in the past, foremost among them the late New Zealand Olympic Kaumātua Amster Reedy. When the New Zealand Olympic Committee approached Nat to guide and advise the team on matters of culture, he felt daunted.

“I was aware of the people who had advised the committee before: Dallas Seymour, Ranui Ngarimu, and former athletes like Trevor Shailer. Being the team doctor would keep me busy enough, so I was quite conflicted.”

Nat made a compromise with the committee and agreed to lend his cultural knowledge and assist where he could. As expected, the dual responsibility was very demanding, and when Nat returned to New Zealand he knew he had to speak to his colleagues about it. But instead of walking away from his new commitment, he let the experience fortify him. He recommended that the committee develop better structures to ensure they were getting cultural advice from people who have the expertise.

“I spent the time to get some support structures in place. I really wanted to be involved in the part Ngāi Tahu plays with the team, because I love to recognise my identity in that component,” Nat says.

“Ranui (Ngarimu) and matua Maurice Gray were really helpful in allowing me to find confidence in the role, and to fulfil the tasks that I had been asked to do.”

In December 2017 the New Zealand Olympic Winter team were making final preparations for the February 2018 PyeongChang games in South Korea. Nat was getting ready to lead a delegation from the Olympic Committee to Arahura Marae. The team’s pounamu taonga were ready to collect. After the pōwhiri, the handover ceremony was run by Te Rūnanga o Ngāi Tahu kaiwhakahaere Lisa Tumahai. Te Rūnanga o Ngāi Tahu CEO Arihia Bennett was also present to help with the handover and wish the team the best of luck.

Nat had worked with Ngāi Tahu Pounamu to create a design that would fit the campaign. Each taonga was carved from the same stone, which Nat emphasised when presenting them to the athletes. “When we took the taonga with us to PyeongChang we had athletes meet us there from training camps in Europe. So as we welcomed the athletes in, we presented them with their taonga, and we were also reuniting the stone.” The kotahitanga narrative that Nat weaves into this ceremony becomes even more relevant so far from home, in an environment where rivalries come to a head, and years of training can come down to one moment.

“We remind the athletes that pounamu is created in a pressure environment, and that gives it its hardness. That’s what the pounamu means to me – it’s about Ngāi Tahu saying, ‘We’re behind you, this is your stage.’”

Nat spent a very busy month in PyeongChang working with the team and fulfilling his dual role. “I would have breakfast with the athletes and work my way around to have a check-in and see how they were. I followed them to their events so I could be present in case of injury. When I’m there I can only be the doctor if something goes wrong; so I also had a role on the radio, communicating with the support team at the top of the slope.” Evenings would start with more rounds to check on athletes who had sustained injuries or were dealing with sickness, and conclude after meeting the physio-therapy team.

Being part of New Zealand’s most successful Winter Olympic campaign ever fills Nat with a great sense of pride. After returning home and fulfilling his role in PyeongChang, he was able to spend quality time with the people who matter to him most – his whānau. As a husband to Kristina and father to Kiki (9), Tawhai (7), and Aria (4), it’s not surprising to hear that he no longer has time to play sport. “I have an awesome whānau that keep me grounded and keep me active,” he says. “I can take part in their sports – I can’t surf but if they’re in the water I’ll jump in too, and I can teach them a few things when we go skiing.”

Nat is a man of great discipline, dedication, and duty. These attributes served him well as he trained at medical school, explored his Ngāi Tahu identity, and reached new heights in his own sporting pursuits. Beijing will host the next Winter Olympics in 2022 – too far in the future to confirm Nat’s involvement. However, the strength of Nat’s character tells me that helping New Zealand set a new benchmark for winter sports may prove too tempting to turn down.