Tags: From the Editor

As we go to print with this issue of TE KARAKA, Oranga Tamariki continues to be at the forefront of media attention. As is often the case the coverage is largely condemning of the actions of the organisation and its leadership. I am sure there are many success stories to counter these but I guess they don’t make for such sensational headlines. On page 16 Where to from here? is an eloquently written piece by Anna Brankin that explores the challenges for the iwi as we move forward in our strategic partnership with Oranga Tamariki – a partnership founded in a shared aspiration to work together to reduce the numbers of Ngāi Tahu tamariki in care. While there is clearly a long way to go, it is important to remain mindful that transformational change is an evolutionary journey – it doesn’t happen overnight and it certainly doesn’t happen in isolation.

Te Hōkai Nui is an exemplar of what can be achieved with the right attitude and the right partnership. This iwi-led initiative with Otago Polytechnic has produced 56 Applied Business Management degree graduates over the past three years – an opportunity for a higher educational attainment that would not have otherwise existed for many of those on the programme. Read more on page 20.

And, embracing the digital age, Maru Nihoniho is a wahine putting a new spin on reaching and engaging with tamariki and rangatahi – she’s all about big ideas and out of the box thinking – using interactive technology to develop resources (games and apps) with a kaupapa Māori cultural lens to attract our kids. Her most recent project SPARX is a resource designed to support young people suffering from mental health issues. You can read her journey on page 28.
Nā Adrienne Anderson Waaka 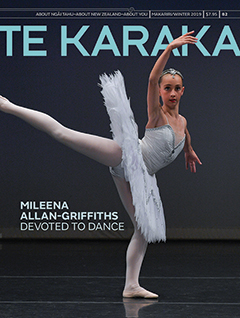