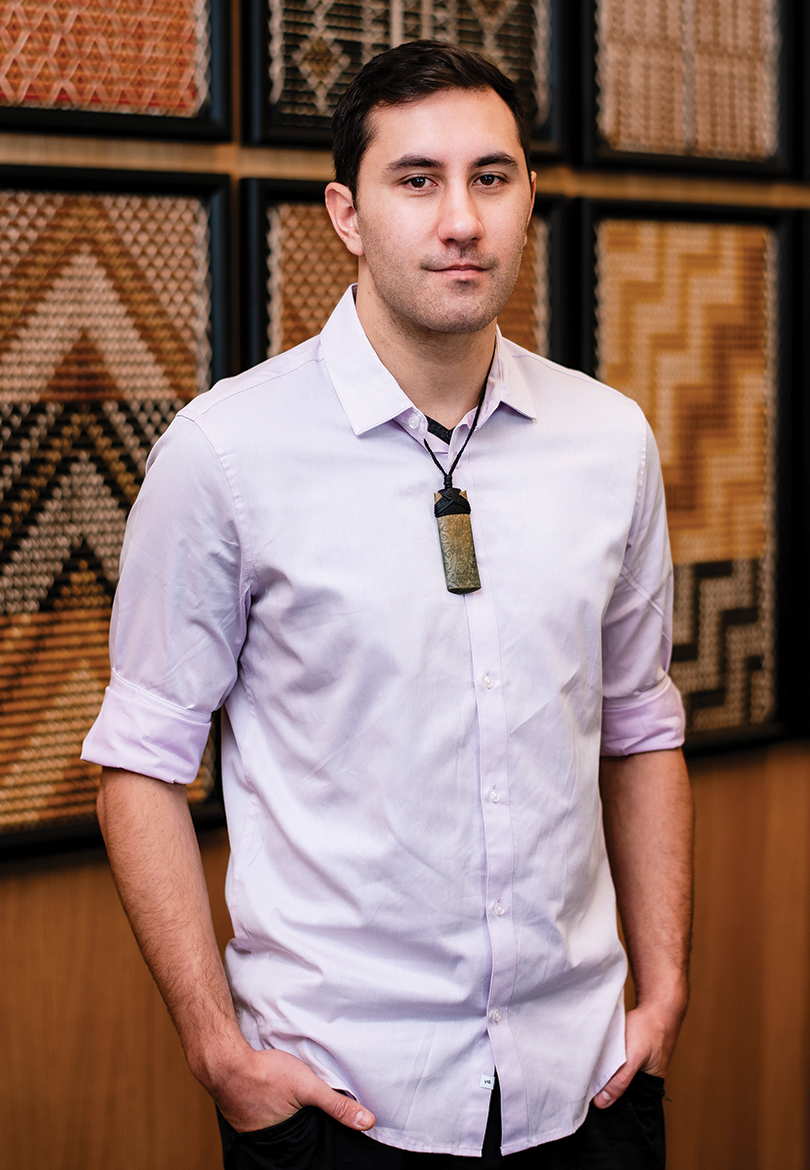 As Māori we understand that all things are connected. Many of our traditions reinforce this concept. In karanga, our wāhine use strands of shared history to bind manuhiri to haukāinga and vice-versa. In whaikōrero, our tāne use chants to link us to our atua such as Pokoharuatepo, Papatūānuku and Ranginui. In pepeha, we often introduce ourselves by identifying our maunga, awa, waka and people. These markers tell a story about where we come from and who we are connected to, but they also represent what we are made of. In science, they call this genomics.

Genomics is the study of genomes. A genome is the complete set of DNA of any living thing. Each genome has a history. It has parents, grandparents, and it potentially descends from a long line of chiefs. Like whakapapa, environment shapes the genome. Its surroundings cause adaptation and evolution.

Levi is a kura kaupapa kid. He went to kōhanga reo and then attended rumaki at Rotorua Primary School before moving to Tuahiwi. He completed his schooling in Ōtautahi and is now studying towards a doctorate at Te Whare Wānanga o Waitaha (University of Canterbury).

His upbringing fostered his strong connection to Māoritanga and to all his iwi. Through his mother, Dianne, he is connected to the East Coast of Te Ika a Māui.

“My nana was a Walker from the Coast. So, all that lot from Te Whānau a Apanui, Te Whānau a Pararaki around Waihau Bay, Te Kaha areas and, of course, Ngāti Porou.

“We still have quite tight connections; obviously growing up in Rotorua we were a lot closer to our cousins. We spent most of our holidays down at the Coast, and we just did the things you do: fishing, hunting, and diving.”

When Levi was 11, the whānau moved south and lived across the road from Tuahiwi Marae.

His father, Fayne Robinson, is a Ngāi Tahu master carver, and from a young age Levi developed an appreciation of whakapapa by watching him work and learning.

“I was quite privileged to grow up in unfinished marae, obviously with Dad’s mahi whakairo and particularly doing a wharenui it is all about whakapapa,” he says. “So, when we were around, and even if we were just scrubbing things with a toothbrush, he made sure we knew the names and knew our connection to them.”

Today, Levi often uses the concept of whakapapa to explain what he does with genomics.

“I have found it easier to explain genomics to an aunty on the marae than to most other people. At the end of the day I am looking at the relationships between these populations, just as we look through our whakapapa between our hapū and wider iwi.”

It is at the intersection of whakapapa, genomics and ecology that Levi has found his niche, and he now has the kōwaro under his microscope.

The kōwaro is a critically endangered mudfish that mainly lives in Waitaha. They reside in almost uninhabitable stretches of rivers and ponds that often dry up over summer. They live in these areas to protect themselves from tuna and trout, but their options for habitat haven’t always been so limited.

In 1880 when Wiremu Te Uki stood at the Smith and Nairn Royal Commission and said: “We used to get food from all over our island; it was all mahinga kai,” he described the abundance of Te Waipounamu. During those times kōwaro lived in the wetlands that covered Ngā Pākihi Whakatekateka o Waitaha (Canterbury Plains), and like all our native species, they were thriving.

Since then, we have drained 98 per cent of their natural habitat and forced the kōwaro to live in challenging environments to keep themselves safe.

Levi’s research focuses on kōwaro and understanding how environment affects their genome.

“We are more looking at population levels rather than individuals,” he says. “We are trying to work out what will give the fish the best chance of survival. If that is just having the most genetic diversity, which is usually a good thing, or if it’s looking at if these populations are going to be better and more able to adapt into the new places that we are putting them in.” 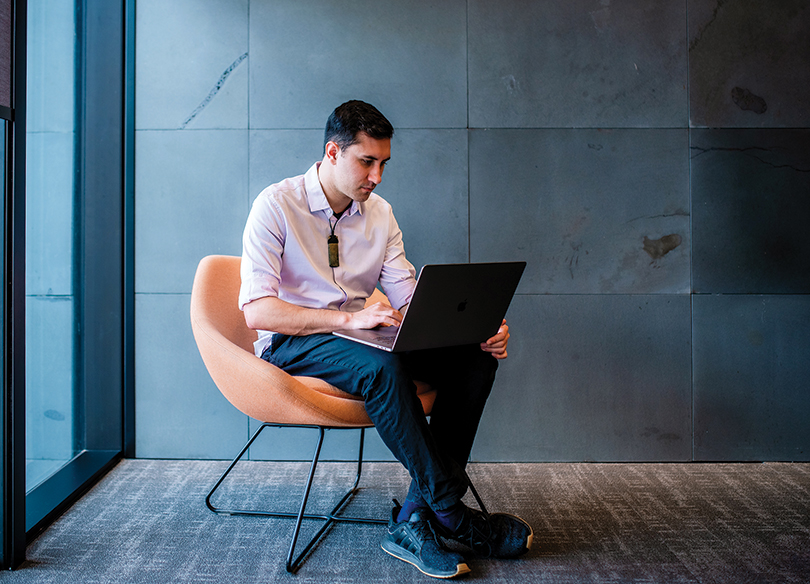 To analyse the genome Levi, with the support of Ngāi Tūāhuriri, sampled one kōwaro to create a reference genome. He then clipped fins of 73 kōwaro from different populations to extract their DNA.

In each sample there is enough DNA to sequence the entire genome of that kōwaro.

But instead of rebuilding the genomes for each kōwaro, he is comparing samples to the reference genome and looking for differences between individuals and populations.

“At a very basic level, we are figuring out what we have got so we know what we can conserve when it comes to genetics,” he says. “It is only a tiny piece of the puzzle, but when you are working with something that is critically endangered and declining you have to act now, you can’t wait for all the answers before you do something.”

Genomic analysis on the kōwaro genome is in its infancy. The focus for the research so far has been collecting samples and building a good relationship with mana whenua.

Ngāi Tūāhuriri has worked with the Ngāi Tahu Research Centre, and Te Whare Wānanga o Waitaha to co-develop the kaupapa.

Te Whare Wānanga o Waitaha approached Ngāi Tūāhuriri about the genomics research project and together they decided to research the kēkēwai (freshwater crayfish) and the kōwaro. The hapū have also been involved in sampling, and they have helped Levi make decisions on how DNA data should be managed.

“One of the reasons I came on to the project was because these relationships were already being built, and I am all about that,” says Levi.

Last year, with the support of his colleagues, Levi wrote a paper for a special Mātauranga Māori issue of the New Zealand Journal of Ecology about their engagement with mana whenua.

“There are lots of other genomics projects happening across Aotearoa. People are doing their own thing without meaningful relationships with mana whenua. That is part of the reason why we put out a paper in the New Zealand Journal of Ecology.

“We are not trying to give a silver bullet that solves all of the problems, but we are showing what we did to give an idea about how it can apply to other research,” he says.

“Other than just being the right thing to do, getting mana whenua involved in research adds value,” Levi says. “It gives you access to mātauranga that has been passed down through pūrākau, whakapapa, and our mahinga kai practices that can help fill gaps in the research.”

Levi acknowledges there are other Māori working in genomics, and there are groups starting projects to support genomic researchers to understand the importance of working with Māori.

The next step in Levi’s research is to take a closer look at the massive amount of genomic data he has collected. In each kōwaro genome, there are 700 million base pairs of DNA to examine, and like exploring our whakapapa, he will be looking for differences and common links across sampled populations.

With so much data to analyse, it will be some time before Levi can make robust recommendations that can help the kōwaro thrive. However, he hopes his research also improves how we use genomics to ask some of the questions about our taonga species.

“Hopefully some of what I look at will be useful, not only for kōwaro but for all of our threatened species,” he says.