“My vision is that we increase our Ngāi Tahu footprint on the landscape in appropriate ways, in both a commercial and cultural sense.” – Matapura Ellison, Deputy Kaiwhakahaere, Te Rūnanga o Ngāi Tahu
Nā Rob Tipa 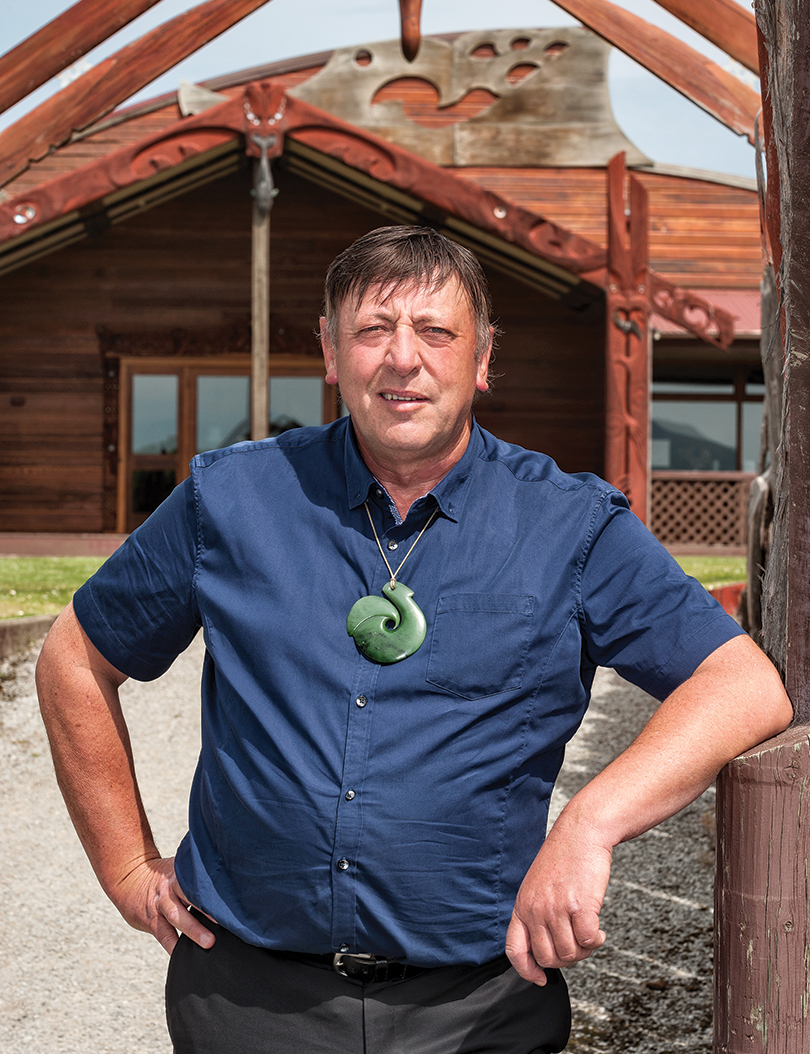 Matapura Ellison (63) is one of the quiet achievers in Ngāi Tahu tribal politics, a leader who is widely respected for his natural skills in diplomacy and his proven ability to get on with people.

Last year he was elected Deputy Kaiwhakahaere of Te Rūnanga o Ngāi Tahu, a role he thought would be challenging but would allow him to carry on with governance roles within his rūnaka and in Ōtepoti. “I want to be part of a conscious change of leadership style at the helm of the iwi.”

After nearly a year in the job, Matapura reflects on a remarkable turnaround in the financial position of the iwi since he first became involved in hapū politics more than 40 years ago.

The Te Runanga o Ngāi Tahu 2017/2018 Annual Report, released in October, confirms that the iwi is in a strong financial position. Its net profit of $150 million has resulted in a $61 million distribution of funds to the 18 papatipu rūnaka from a steadily-expanding equity base of $1.57 billion in assets.

“It has been an absolute privilege – that’s the best way I can describe it – to see where we have come from in my lifetime, and to see where our tribal organisation and our papatipu rūnaka are now,” says Matapura.

Matapura vividly remembers those lean times and a hand-to-mouth existence, with a saucer passed around committee members for donations to pay the electricity bill for the Huirapa Hall. The big issues at that time were very different – repainting the hall was a mammoth task that depended on whānau donating their time, resources, and the paint as well. Now, a big issue is where to invest a million dollars.

“You can very easily forget where we have come from in such a short time,” he says. “The growth in our generation has been quite phenomenal.”

Looking back on his childhood, Matapura says the small coastal village of Karitāne was an idyllic place to grow up during the late 1950s and 1960s.

“It was a great time to grow up,” he says. “New Zealand was very innocent and free of a lot of the pressures kids experience today. We made our own fun, playing on the river in dinghies, floundering, and there was plenty of tuna, pātiki, and whitebait seasonally in the river.”

Matapura went to school in Karitāne and Palmerston, and his interest in Māori arts and crafts was fostered by his mother, Joan.

He taught himself the rudiments of Māori wood carving but without the guidance of a tutor to learn the art, he realised this aspiration would not be met. He was fortunate to receive a Māori Affairs Scholarship to Telford Farm Training Institute in Balclutha, with the intention of going on to study agriculture at Lincoln College (now Lincoln University).

Those plans were shelved when his father Rangi took ill. Matapura returned home to help out on the farm. He married young, had a family and a mortgage, and remained on the farm for the next 20 years.

He still lives in the same family home where he was brought up, and is now married to his second wife, Maria. The couple have a composite family of five adult children.

“It was never easy on the Māori reserves,” Matapura explains. “It was never enough land really, and for various reasons many whānau sold their holdings and moved to Dunedin.

“Dad inherited some land from his father, along with a very large mortgage. He worked night and day to make a successful farming business for himself, but he had this belief that he should never sell the land because there was no more being made.”

Matapura says that philosophy was “almost genetically coded into us – to retain the land through hell or high water.”

While he still loves farming, over the years work commitments have taken him away from the farm for extended periods. However, he has retained ownership through joint farming relationships with neighbours.

For 20 years he worked as kaupapa atawhai manager for the Otago conservancy of the Department of Conservation (DOC), a great job in that it gave him opportunities to grow, learn, and hone skills that have served him well since.

One of the highlights of this role was that he had to develop his knowledge of tikanga and kawa specific to Ngāi Tahu, because he was expected to provide cultural advice to his bosses and colleagues at DOC. 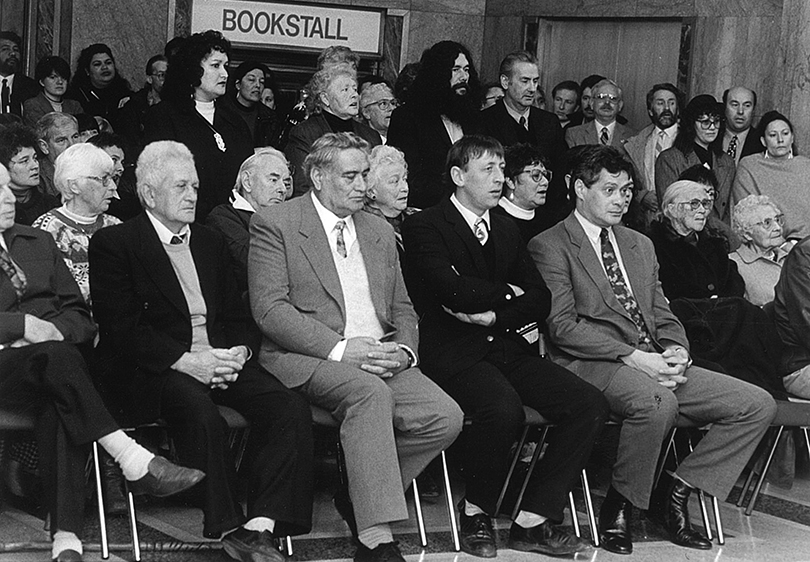 Above: Matapura Ellison and others attend the 1994 opening of the Kāi Tahu Whānui ki Otago exhibition at the Otago Early Settlers Museum, marking 150 years since the purchase of the Otago Block. Firstly published in the Otago Daily Times.

He met Trevor Howse, a senior Ngāi Tahu Treaty Claim negotiator, who became his mentor. Trevor gave Matapura a broader view of the Ngāi Tahu world, whakapapa, and history; and an introduction to the Treaty of Waitangi claim.

“That aided me greatly in building that ability to provide cultural and political advice, firstly engaging as a DOC point of liaison with the Ngāi Tahu Māori Trust Board, and then with Te Rūnanga o Ngāi Tahu (TRoNT),” Matapura says.

“It could be quite a lonely place for a Ngāi Tahu person, but I developed a great respect for my conservator boss, who was careful to ensure I did not become conflicted within the direct negotiations between the department and iwi.”

In the second of three major restructurings within DOC, the jobs of Matapura and colleagues in similar roles in Canterbury and Southland disappeared. Matapura says it was disheartening to see many of the systems and structures they had helped put in place be dismantled or evaporate within a year or two, as the staff they worked with left DOC and new people came in.

However, some innovative projects he was involved in did survive; including a process for artists and weavers to source cultural materials, and a visionary project to re-establish populations of buff weka in Central Otago.

At times like this when one door closes, another opens; and for Matapura, returning home to the family farm at Karitāne was very therapeutic.

“You can dig a hole, put a fence post in, ram it, and it’s finished. You can see a job start and finish, which is quite satisfying.” Quite different from working in projects which might have a multi-year lifetime.

“Looking at our latest report, I can’t help thinking about those wonderful kaumātua I knew when I was young, who were there before I was. I hope they would feel very satisfied that the work they put into fighting for the Claim Settlement has been taken forward and grown.”

Throughout this time Matapura has remained involved by serving on the boards of a number of not-for-profit Māori community-focused organisations in Dunedin. He is particularly proud of his role as a director of Te Kāika, the low-cost health centre recently established in Caversham, Dunedin. Also, for the last 18 years Matapura has represented Kāti Huirapa Rūnaka ki Puketeraki on the TRoNT board, and has seen the skills of the board mature in that time.

“In the early days a lot of learning needed to happen, and I think it has taken us 20 years to get to where we are now,” he says.

“The annual report reflects 20 years of hard work, making some mistakes, recovering, not making those mistakes again, and learning from those mistakes.

“Looking at our latest report, I can’t help thinking about those wonderful kaumātua I knew when I was young, who were there before I was. I hope they would feel very satisfied that the work they put into fighting for the Claim Settlement has been taken forward and grown.”

Matapura believes the organisation is ready for the next big leap forward under the umbrella of Haea te Awa, a new future-focused initiative to encourage more regional development of the iwi, as well as looking at the health and wellbeing of our whānau. 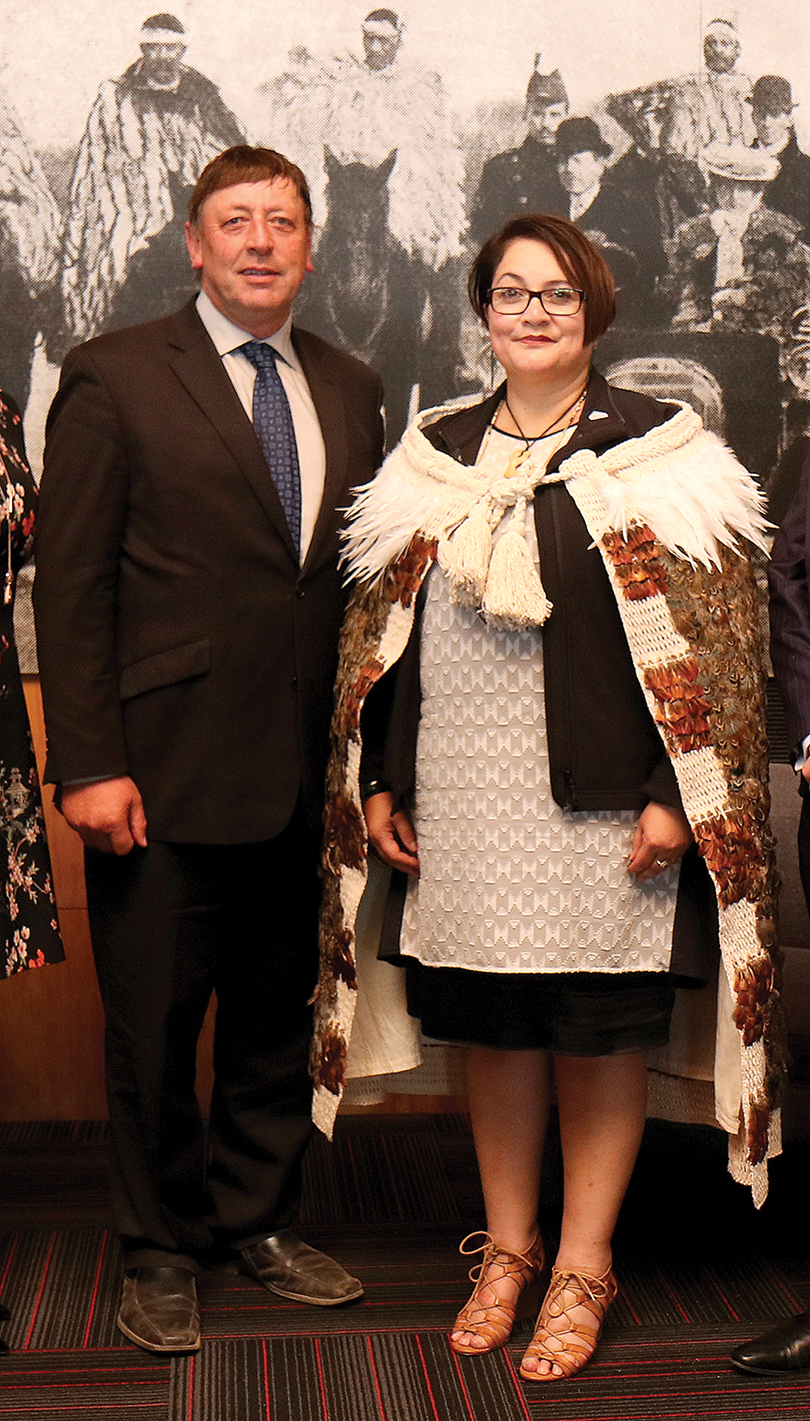 Above: Matapura Ellison with Lisa Tumahai following their appointments as Deputy Kaiwhakahaere and Kaiwhakahaere.

“There are 62,000 people registered as Ngāi Tahu, and two-thirds of these people live outside the takiwā. We’ve had to recognise that empowering rūnanga will not empower everyone, so a wider focus is needed.”

While unlocking regional development opportunities for papatipu rūnaka, Matapura is adamant that there must be relevant and innovative ways for all Kāi Tahu whānau to engage and make a contribution. While it is still early days, TRoNT governance is moving towards a wider team approach to try to create more opportunities for Ngāi Tahu people to step up into leadership roles. Matapura says the level of governance excellence within the representatives of Te Rūnanga has greatly increased, and is a reflection of the success of this change.

“How our future generations see us is important to me … Hopefully, we will be seen by generations to come as studious, good leaders of our day who helped to rebuild Ngāi Tahu.”

“It is a conscious change in leadership style which I fully support,” he says.

“I want to be the best support that I can to our Kaiwhakahaere. My primary role as Deputy Kaiwhakahaere is to support Lisa. I also want to be part of a team that our descendants might look back on and say that we showed some innovation, heart and flair which got us to the next level of our tribal development.”

Matapura acknowledges that his new job as Deputy Kaiwhakahaere comes with a “hefty responsibility that weighs heavily on my shoulders.

“How our future generations see us is important to me, and is one of the things that may keep me awake at night,” he says. “Hopefully, we will be seen by generations to come as studious, good leaders of our day who helped to rebuild Ngāi Tahu.

“My vision is that we increase our Ngāi Tahu footprint on the landscape in appropriate ways, in both a commercial and cultural sense.

“I hope we are smart about that, and that the footprints we leave are not a millstone for the next generation, but an enhancement of their opportunities.”