Green by name, green by nature

Simon Cooke, who has whakapapa to Ōtākou and Waihao, is the founder of Kakariki Beer Co and a true entrepreneur at heart. Since receiving a start-up grant from Puna Pākihi one year ago, Kakariki Beer Co has gone from strength to strength. One of Simon’s brews was selected as the beer of choice at the Social Enterprise World Forum 2017 in Ōtautahi. Earlier this year he brewed a special edition Pride Beer, to support Pride 2018. Kaituhi Ranui Ellison met Simon to hear more about his story. 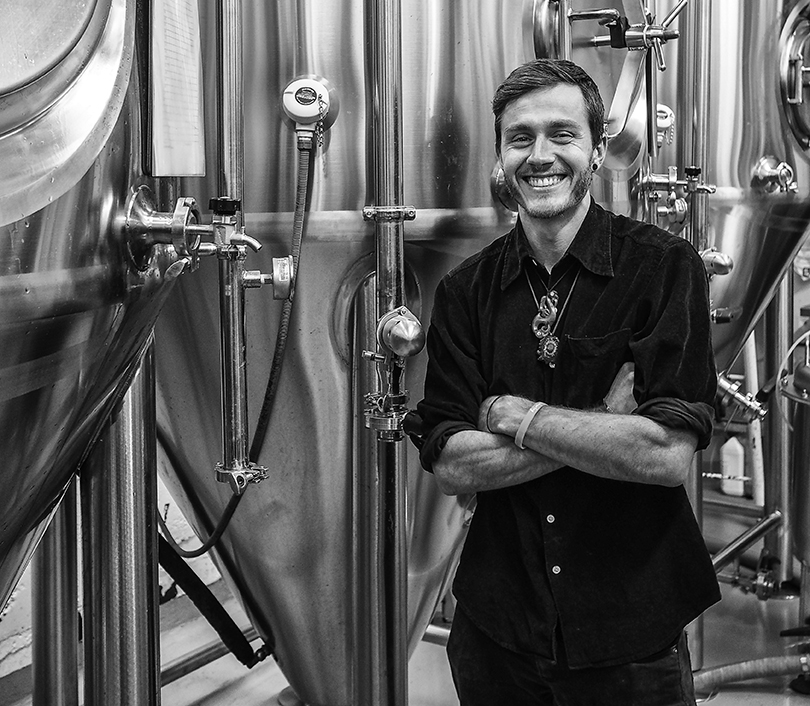 Simon’s passion for brewing beer began, perhaps unsur-prisingly, during his university years. Raised in Ōtautahi, he moved to Te Whanganui-a-Tara at age 19 to complete a Bachelor of Design at Massey University. During this time Simon was a residential assistant at his university hall, as well as being elected to the residents’ committee. There is a certain irony in the fact that his duties meant he was expected to enforce alcohol restrictions, while at the same time he began brewing in his dorm room in an attempt to produce cheaper beer. He describes himself as a bit of a “rule re-interpreter”.

It may have been an economic decision to start brewing, but it was the beginning of the passion that would later become Simon’s career. “Initially my beers really sucked, but I thought they were great because I made them with my own hands,” he says honestly. “But with each batch of beer I made they got better and better.”

Never one to sit still, Simon kept himself – and others – busy by creating a host of extra-curricular activities. He started the university’s first Wellington rugby team, established the Massey University Brewing Society, hosted pub crawls “with a twist” and “brewtorials”, and sourced funding for communal brewing gear.

The common thread in these achievements was clear – with the exception of the rugby team, of course. The Brewing Society was a channel to engage keen brewers. Regardless of the level of their brewing experience, members had the opportunity to partake in pub crawls where they could meet the brewer and learn about the production process and the craft behind each beer. Further, they would have access to equipment and innovative everyday substitutes for brewing equipment to begin their own production. Step-by-step tutorials were also available, along with perhaps the most important factor – brewers who were willing to share their knowledge.

After completing his Bachelor of Design, Simon entered into post graduate studies focusing on graphic design, with a focus on ways the emerging craft beer industry could communicate with people. Towards the end of his studies, his lecturers began encouraging him to build his own brand and put some of the elements he had been researching into action. With funding from the Massey University Brewing Society, he was able to establish a brewing company called “Half Tanked”.

“I had no idea what I was doing really. I ordered the ingredients to my flat, which was several hundred kilos of grain; and then figured out that it maybe would have been better to deliver it to the brewery,” Simon laughs.

“So, I borrowed a car and with my buddy drove up to Mata brewery which was in Kawerau, and slept in the car next to Lake Taupō for the night on all the sacks of grain, because there were so many of them.

“The next day we went to the brewery and just did the thing, made my first batch of beer; and by the time I was graduating and had finished my final papers it was time to launch.”

Within a few weeks of this, Simon was off to Europe, and unsurprisingly he found himself exploring the local brewing culture in the countries he visited. While on his travels he was pleasantly surprised to receive emails from bars back home requesting more beer – but unfortunately, he had only made the one batch.

At this point, Simon shares a revealing glimpse into the brewing industry. “If the contract brewing process is to design a recipe and email it to the brewery of your choice, then three weeks later it will be delivered to an address of your choice in kegs,” he explains.

It made very little difference whether he was in Wellington or Spain. With the support of his parents, he was able to have local champions put courier stickers on kegs and deliver samples, and also to “watch the brew day via Skype from Spain at four in the morning.” And just like that, Kakariki Beer Co was born.

Initially, the brews came with a whole lot of trial and error, but over time, Simon began to trust his instincts. Eventually, he could pull a recipe out of thin air, tweaking it by using brewing software to calculate colour, balance, and bitterness, and be confident in the final product. I ask him if his natural ability to tweak recipes without testing the result could be applied to other areas such as cooking. He promptly confirmed it could, and even added relationships to the mix.

A year or so later when he returned from his travels in Europe and Canada, money was relatively tight and he found himself managing a café and roasting coffee beans on the stunning south coast of Wellington. This job allowed him to apply many of the same principles he had attained while brewing, which he “really enjoyed”, but it also meant that his fledgling beer brewing operation was more or less on hold.

When the café was sold, it left Simon at a crossroads. Continuing the Kakariki brand felt like a “natural calling”, particularly given the knowledge he had gained by exploring craft beer culture in countries such as Germany and Spain. He is especially proud of the fact that he has been able to use these insights to add some flair to his own brewing style. I asked Simon whether his Māoritaka influenced the recipes he creates.

“I would like to think so. But I’m definitely listening to hear how it can exist in an even stronger way.”

To qualify for a Puna Pākihi start-up grant, offered by the Tribal Economies team at Te Rūnanga o Ngāi Tahu, Simon was paired up with a mentor who would look over his business plan and operations before approving financial support. He now receives ongoing mentorship, which has been invaluable in connecting him with like-minded people working in similar circumstances.

After renewing his focus on Kakariki Beer Co, Simon found himself looking for support, both financially and professionally. He had exhausted all the usual channels and felt drained and undervalued. Just as he thought he was running out of options, his youngest brother mentioned the Puna Pākihi start-up grant, offered by the Tribal Economies team at Te Rūnanga o Ngāi Tahu. Simon discovered that to qualify for a grant, he would be paired up with a mentor who would look over his business plan and operations before approving financial support. He now receives ongoing mentorship, which has been invaluable in connecting him with like-minded people working in similar circumstances.

“When it felt like all the regular default resources and support systems just said no to me, Puna Pākihi just said yes, yes, yes,” Simon recalls. “Things just started happening much quicker and I felt really held, when I had felt so shut out until then.”

When asked to describe his vision for the next five to ten years, Simon gives this ambitious response: “I want to have the most sustainable and regenerative brewery in the world.”

Breweries rely on the environment in many ways, from the ingredients that grow in the soil, to the water to grow those ingredients, make the beer, and operate the brewery. There are so many elements, and even more potential to be environmentally considerate. Aside from selling beer, Kakariki Beer Co aims to have a positive impact on the environment, and to invest in riparian planting and water security.

He aims to be able to measure his contribution towards clean water projects and ensure that his efforts are cleaning more water than used to make his beer. Simon says with pride, “in five to ten years, I would love for me and my whānau to literally go and visit and be with the forest that Kakariki has helped to create. And then, perhaps, you don’t feel so bad about having a few beers every now and then.”

This environmental vision flows all the way through, as the name Kakariki Beer Co is intended to reflect home and the “green” brand he aspires to create and uphold.

“You can pick a name and explain the story behind it, if you have an hour,” says Simon, drawing on his marketing background. “Or you can pick something that already has a feeling woven into it.” For Simon, Kakariki was that name.

He recalls the moment when a complete stranger stopped him in the street after seeing his branded T-shirt and sang a line from the well-known children’s song Mā is White: “Kakariki green”. That was the impact he wanted the name of his business to have.

As our kōrero came to a close, I asked Simon for one piece of advice he would give to aspiring entrepreneurs.

“I think something that is really strong for me at the moment is to set your ideas free,” he replied. “If you’re feeling called to an idea, or even if you don’t have an idea, just get together with your mates and make an idea club. Make an entrepreneurs’ club.”