The morning was hot, but Auntie Jane Davis and three other Ōraka-Aparima tāua, Betty Rickus, Vera Gleeson, and Rangimaria Suddaby, walked the beach wrapped head to foot as if battling a blizzard. Which they were: a blizzard of namunamu. Each fought off their own personal storm cloud of sandflies as they scanned the shingle.

“Have a look at this,” Rangimaria called.

She held out a palm-sized stone shaped like a heart. The edges were a battered greenish-white, but the waves had buffed its face to a warm glow, like sunlight through seawater. Tangiwai. It’s a rare member of the pounamu whānau. Though too soft for weapons or tools, it’s long been prized for its translucent beauty.

We were at Hūpōkeka (Anita Bay), a sheltered harbour in Piopiotahi (Milford Sound). For centuries our tīpuna have been collecting tangiwai from this beach. Having been granted a Customary Authorisation, we’d come to gather a small collection of our own. Over the coming weeks 30 Ōraka-Aparima whānau and friends would help carry the stone through Fiordland to the Southland coast, where it would be gifted to Takutai o te Tītī marae. We wanted to bring tangiwai home the old way, to navigate using Māori place names gathered by the Ngāi Tahu Cultural Mapping Project, and to celebrate Ngāi Tahu manawhenua in the deep south.

For the first section through to Te Ana-au, it was myself and artist and tramper Bridget Rewiti.

“Now, you be careful,” Auntie Jane said. “Look after each other out there and come back safe.”

After blessings and farewells, the kaumātua headed home the smart way. Their chopper lifted with a roar and vanished over the headland, leaving us with the feeling that we had a long way to go. Especially carrying a heavy pack that would include precious pounamu. We laid out what we’d gathered, and chose carefully.

“This one?” Bridget joked, lifting a boulder the size of a pumpkin.

Instead we chose a few modest taonga that showed how the ocean turns raw stone into polished jewels, from a small barnacled cobble to tiny translucent teardrops. Tangi-wai. There are several pūrākau about its creation. One tells that Hine-Tangiwai was one of the wives of Tama-ahua who came to Aotearoa aboard the Tairea canoe. A later account says that when Tama found her turned to stone in Piopiotahi, he wept over her body and his tears entered the rock.

Misty mountains rose vertically from the sea, and we just about dislocated our necks staring up at the waterfalls. It was the best way to experience Piopiotahi. You could easily imagine large wooden waka out here on the water, exploring, cruising, fishing, or pounamu-gathering.

On the beach the next day, the radio crackled to life. “Hey, are you guys good to go? There’s a big storm coming in.”

Out in the bay the yellow launch from Rosco’s Milford Kayaks rose then vanished on the swell. If we didn’t go now we’d be stranded for days. With the tangiwai loaded into sea kayaks, soon we were paddling down Piopiotahi with the excitable Adam, one of Rosco’s chief guides. They’ve been running trips in the area for 25 years, and generously offered us transport and guided sea kayaking back to Milford.

Dark cloud gathered overhead as our tiny craft skimmed along the surface of the Sound. Misty mountains rose vertically from the sea, and we just about dislocated our necks staring up at the waterfalls. It was the best way to experience Piopiotahi. You could easily imagine large wooden waka out here on the water, exploring, cruising, fishing, or pounamu-gathering.

Most canoes carrying tangiwai would have returned to Murihiku by way of the coast. We were heading south instead, towards the start of the overland route. We passed through Te Hehe, a more recent name for The Narrows that recalled the navigator on the waka of Maui, the Mahanui. At the mouth of Te Awa o Hine (the Arthur River) we rafted up and told stories of Tū-Te-Raki-Whānoa carving the fiords. Then, tired but exhilarated, we turned for land as it started to rain.

When storms hit Piopiotahi they mean business. Rain lashed the roof for days. But the foul weather turned out to be a blessing. The Milford Track is one of the most popular in the world, but half the walkers had been choppered out. For a day we got to glimpse the landscape as a quiet pounamu trail: just us and the bush.

Rosco’s launch dropped us off at Te Namu o Hine Nui te Pō, the highest point a traditional waka could come upriver. We meandered through forest that was exhaling mist into the morning sun. South of Te Moana o Nohorua (Lake Ada), we stopped to check our maps. One was topographic, the other oral, gleaned from an old song recorded from a southern tāua. We walked our way through the destinations in the song, from Nuku-tau-roa (Giants Gate Creek and Falls) to Te Tau-tea (Sutherland Falls).

The Department of Conservation had kindly granted us use of their staff huts. The first was directly across the valley from the stupendous 580m cascade of Te Tau-tea. Sitting out front having a kai, the name seemed perfect: a long white thread standing against the dark cliffs.

Climbing towards Ōmanui (Mackinnon Pass) the next day, we saw other walkers coming towards us.

“Um, aren’t you going the wrong way?!” a woman called.

We feigned surprise. “What? Oh no!”

We were doing the track backwards. When we explained why and let the hikers hold a piece of tangiwai their faces lit up.

“So this was a greenstone trail!”

Progress slowed as we stopped to chat with group after group, pointing out the landmarks and their Māori names. The last hikers straggled past, then we were free to carry the taonga up and over the range dividing Piopiotahi from the interior. Rain returned with a vengeance on the saddle. The Clinton valley was one long white curtain of water pouring down black rock. Soon we were drenched, but happy among such beauty and power. After another night in a cozy DOC hut we marched out to Te Anau-au.

“It’s a wonderful thing to see descendants travelling in the sacred footsteps of our ancestors.”
Ōraka-Aparima kaumātua

“Alright cuz, ready to go?” Karina Davis asked. She shoved a paddle into my hands and grinned. A crowd of Ōraka-Aparima and Ngāti Kahungunu paddlers bustled around the edge of Te Ana-au, strapping the two waka together. This was the first time the two crews had joined forces, and the first time they’d paddled on the inland lakes. Karina later told me why she got involved in organising the haerenga.

“I wanted to travel the trails of our tīpuna,” she said, “and gain a greater understanding of what the journey was like for them. And to be part of something exciting and physically demanding.”

Twenty-five paddlers and whānau gathered for karakia. We passed the tangiwai hand to hand before loading the precious cargo. Under clear skies we launched the boats at Te Motumotu-a-huka (Te Anau Downs), heading for Te Anau township.

The paddlers tensed like sprinters on the starting blocks.

A dozen blades dug into the water and the boat leaped forward. The old hands were straight to bantering and laughing. Us novices had to concentrate hard to avoid splashing everyone.

“Hup!” the kaea called the change, and our blades flashed in the sun.

“Hup! Shut up and paddle you lot!”

To the east we passed the plains carrying pounamu trails to Whakatipu-Wai-Māori (Lake Wakatipu) and Kōtuku (Martins Bay). To the west Te Puhi a Noa and the higher ranges marked the deeper reaches of Fiordland. The support boat, captained by Rewi Davis, cruised alongside to bring water and kai. Rangatahi jumped in for a paddle then jumped back out, happily puffed. The kilometres dropped away: five, ten, twenty-five, past old settlements at Marakura and Te Kōwhai, before the modern town glided into view. We knew our tipuna travelled on water whenever possible. After lugging the tangiwai on foot, the graceful, silent speed of the boats made sense. 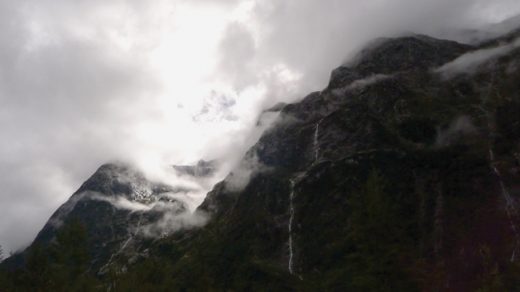 That night our kāhui feasted at Te Kōawa Tūroa o Takitimu, the superb mahinga kai and environment facility of Ōraka-Aparima. Before bed Auntie Jane told us its history, and the importance of having a base in sight of our majestic Takitimu maunga. Each paddler received a tiny tangiwai pebble – ahakoa he iti, he pounamu – as koha for that day’s journey, and as a bribe for the next.

The following morning my brother Tim and I left early to run part of the Kepler Track, panting our way to Moturau (Lake Manapouri). Then we all jumped onto the waka and headed into another sparkling day. The forested domes of Puhi-ruru (Rona Island), Uenuku (Isolde Island), and Niho-rere (Holmwood Island) slid by. At the sheltered end of Hope Arm we picnicked on the beach. After years of racing on muddy rivers, the waka crew stood admiring the crystal water. The tangiwai was unloaded along with our packs. There were hugs and hongi – “See you on the other side!” – then Bridget, the waka, and whānau returned down the lake, leaving Tim and I with some hills to climb.

For the next nine days we would walk south. The customary route followed the Waiau River by mōkihi or on foot. Today farmland and roads cover that trail, so we stayed west and kept to the bush. Near the top of Mt Titiroa we gazed over the Southland plains. At that moment the kōrero about how the Takitimu waka was swept inland and turned to stone came to life. Seen from up high, the dark and dusty Takitimu Range looked exactly like a waka. The ridges swelling round the coast perfectly resembled the waves that sank the waka of the northern rangatira Tamatea-Ure-Haea; it was he who renamed the range Takitimu to commemorate the event.

Rūnaka member and Pou Tairangahau for DOC, Dave Taylor, who’d also helped organise the haerenga, joined us in the Borland Valley. Each day our march continued to the next landmark: Mano-ki-wai (Monowai), Kaherekōau, Hauroko, and Ōkaka (The Hump ridge). After a couple of “Fiordland Shortcuts” (a slog through knee-deep swamp, and a sneaky jetboat ride), we arrived on the sandy curve of Te Waewae Bay, 280 km from where we set out.

At Takutai o te Tītī, karanga and pūkaea rang out to welcome the stone and everyone who helped carry it. Paddlers, walkers, supporters, whānau, and friends moved forward, helped by a cool southerly wind. We presented the taonga to the kāhui kaumātua to be blessed and welcomed to its new home. At the hākari we swapped stories and gave thanks to everyone who’d made the journey possible. It was a night to celebrate connections old and new: between people, and between people and this southern land.

I later asked Ōraka-Aparima kaumātua about the experience. “He mea motuhake kia kite mokopuna haere mā runga i ngā tapuwae ō tātou tūpuna”, they wrote back. “It’s a wonderful thing to see descendants travelling in the sacred footsteps of our ancestors.”