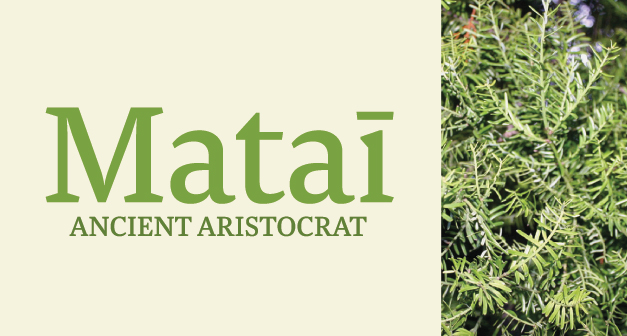 Some sources say our tūpuna recognised two different species of mataī, or perhaps they had very different uses for males and females of the same species.

Mataī is one of the rākau rangatira (chiefly trees) of the ancient podocarp forests of Aotearoa, commonly found in the company of its aristocratic cousins rimu, tōtara, miro and kahikatea.

In its juvenile years mataī is one of the least conspicuous of our tall timber trees; a straggly, slow-growing shrub.

The foliage of young rimu, tōtara and miro are easily identified from a distance by colour and texture, but mataī seedlings demand a closer inspection for positive identification. They have an unruly tangle of branches and sparse needle-like leaves arranged in rows. These leaves release a strong smell when crushed.

We planted a scruffy little mataī seedling in a patch of native bush we look after and it sulked in the shadows for at least 10 years. I thought about rescuing it, and then promptly forgot all about it.

Recently I checked it and that struggling seedling has miraculously evolved into a shapely young sapling close to three metres tall. Its emerging leafless crown is boldly heading for the canopy in hot pursuit of its tōtara, kahikatea and miro cousins that now stand five to six metres tall.

This gives us great pleasure because, God willing and without the intervention of desk-bound bureaucrats or philistines armed with chainsaws, our little patch of podocarps should outlive us by at least 1000 years.

One Te Tai Poutini (West Coast) mataī tree is reputed to be more than 1000 years old. Good specimens generally grow to 20 or 25-metres tall with a girth of about 1.3 metres at chest height.

This robust native conifer grows from sea level to about 500 metres of altitude in both Te Ika a Māui and Te Waipounamu, but is rare as far south as Rakiura (Stewart Island).

Mature specimens have a broad, rounded crown with erect spreading branches and distinctive bark that flakes off in thick rounded chunks, leaving a reddish brown blotch on the trunk. The trunk on a mature mataī looks like someone has taken to it with a large hammer.

Some sources say our tūpuna recognised two different species of mataī, or perhaps they had very different uses for males and females of the same species.

The trunk of the male mataī is gnarly and uneven and its preferred use was for firewood. On the other hand, the female mataī grows straight and true, so its timber was more useful for carving and building. The female also bears fruit, which was collected in large quantities by Māori men in summer and early autumn.

Hua mataī is a blue-black fruit a little like a ripe olive, with a hard seed covered by a fleshy layer. The fruit was eaten raw when ripe and, despite its slimy texture, is apparently sweet and refreshing to taste. The ripe berry is also attractive to kererū (wood pigeons) and the seeds are spread in the birds’ droppings.

Māori drank the sap from certain older mataī trees. The sap is light brown in colour and, according to some sources, has a similar taste to ripe hua mataī – sweet with a bitter aftertaste. The right trees were sometimes identified by a black sap stain, but as trees aged the sap could become sour and acrid to taste.

Pākehā bushmen bored holes at the base of old mataī trees, plugged them and tapped them like a barrel so they could drink the sap fresh after a hot day’s work in the bush. They called it mataī beer, and it was reportedly very refreshing when first tapped, but became flat after it was exposed to the air.

While it had no alcohol content in its natural state, some enterprising home brewers collected it, added yeast and left it to ferment into quite a strong beer.

Some historical references say the juice of the mataī was collected and used to check the advance of consumption, perhaps better known these days as pulmonary tuberculosis.

Māori valued mataī for its fine-grained timber, which they used extensively for building, and carving ornate items like waka huia and waka stem posts. It was also used in a wide range of musical instruments, including flutes of various types, pūkatea (trumpets), gongs and percussion blocks.

The timber had more functional uses too, as large cooking vessels, long hunting spears, handles for tools like toki (adzes) and for thwarts and bailers of waka (canoes). At a pinch it could also be used as a hardwood rubbing stick to start a fire.

Mataī and rātā posts were used to anchor pā tuna (eel weirs) along riverbanks, while the thin pliable branches of mataī were sometimes used to make hīnaki (eel pots).

Pākehā settlers recognised the timber as among the finest of our native forests, with high yields of hard, straight-grained heartwood proving ideal for flooring, weatherboards, and window and door sills.

It was also used for making fine furniture, cabinets, wall panelling and cartwheels.

Because of its density, durability and hardness, mataī was widely used last century for the hard-wearing floors of many public buildings such as churches and community halls, and is still found in good condition in many grand old timber homesteads.

The grain is a fine, even texture and colours range from golden yellow when it is freshly milled to deep red and brown tones as it ages, similar to rimu.

In terms of its medicinal qualities, early New Zealand bushmen were familiar with the antiseptic qualities of both miro and mataī.

In Māori Healing and Herbal, Murdoch Riley explains how a substance known as mataī resinol extracted from the heartwood of the tree is of interest to cancer researchers because of its effects on the multiplication of living cells. It has been found to reduce the multiplication of cancerous cells in mice.

In traditional rongoā (Māori medicine), the outer rind of the mataī bark was scraped off, pounded and boiled in a dish with hot stones, then taken internally to treat severe stomach pain.

Mataī was also recommended for swelling of the neck (lymphatic glands), although the method of treatment is not specified.

The bark was occasionally used by tanners and produces brown tones for dyeing fibre.

Mataī is not a threatened species, and is still logged and milled for timber today. However, environmental sources say intact stands of mataī and indeed mixed stands of podocarp forest are in decline.

What better excuse do you need to plant a cluster of these ancient rākau rangatira in your patch of bush and watch them emerge from the shadows and head for the sky? In a few hundred years’ time, your descendants may thank you for it.