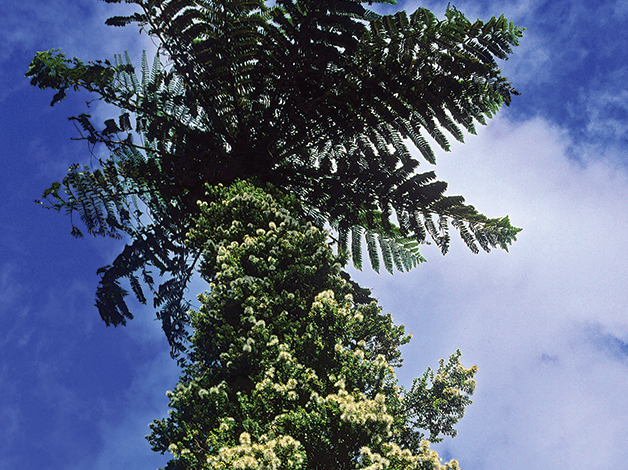 Akatorotoro (Metrosideros perforata) is one of 11 or 12 Metrosideros tree, shrub, and climber species endemic to New Zealand. The climbing rātā, collectively known to Māori as aka, are unique to this country, often starting life as an epiphyte in the branches of their host and sending aerial roots down to earth.

Historical references use several different names to identify red and white-flowering members of the aka family – among them akatorotoro, akatea, aka tokai, akakora, akatawhiwhi and whakapiopio – all with different characteristics, growth habits and ranges throughout
New Zealand. The specific Ngāi Tahu reference to akatorotoro in its taonga plants list suggests that this variety was more available in Te Waipounamu.

Akatorotoro is found in coastal and lowland forests and forest margins from Three Kings Island (Manawatawhi), throughout Te Ika a Māui and as far south as Banks Peninsula and South Westland. Normally it grows as a slender liane, but its thick woody stem can support a vine 15–20 metres in length. On exposed sites it sometimes grows as a bushy shrub with a tangle of branches. Early explorers often used rātā vines to scale steep cliffs.

The distinctive features of Akatorotoro are its compact, almost circular leaves – dark green above and light green below – the undersides of which are covered with conspicuous oil glands. Dense clusters of generally white flowers appear between January and March, but occasionally the colour varies with a pink or yellowish hue.

Southern Māori ethnographer Herries Beattie recorded numerous references of his Ngāi Tahu informants using aka vines for all sorts of construction purposes, generally for lashing timbers in whare, pātaka or waka construction, but also for finer crafts such as making hīnaki (eel pots). His northern counterpart Elsdon Best specifically describes akatoki being used to bind an adze head (toki) to its timber shaft. Some references suggest it was the preferred material for binding footrests to digging kō or binding different parts of weapons.

Aka or pirita (supplejack) vines were sometimes fashioned into a framework to support babies learning to walk, perhaps a prototype baby bouncer of its day.

Resourceful bushmen learnt to quench their thirst by cutting a wedge or slit in the woody bark of a rātā vine and tapping a flow of clear, pinkish juice said to taste just like cider. Historical records often don’t identify which specific variety sources were talking about, but it seems the red-flowering rātā such as akatawhiwhi (Metrosideros fulgens) were certainly tapped for this liquid.

In Māori Healing and Herbal, Murdoch Riley records the extraordinary healing powers of the red and white-flowering rātā. The vine was cut into short lengths and the sap literally blown on to an open wound or haemorrhage to stop the flow of blood. The wound was then bandaged and left to cure.

One early advocate wrote in the Taranaki Herald in 1871 that he had tried this treatment himself, and said: “I cannot give it sufficient praise. I have seen very serious arterial bleeding stopped by this means, the juice of aka being very rich in tannin.”

This treatment appears to have been as effective on hunters and trampers as it was on pig dogs ripped open by a cornered porker.

One account records trampers catching the sap of the rātā vine in a mug and pouring it directly on to a wound to stop the bleeding of an injured person.

Riley records several instances of the sap of aka vines used as an antiseptic. It was used to treat cuts, festered or poisoned wounds, gunshot wounds, and even to ease the pain of a troublesome shrapnel wound of a First World War veteran. The same technique of blowing sap from the vine was used to extract enough juice to bathe sore or inflamed eyes.

The inner bark of rātā vines was cut into strips and boiled until it turned black, then applied to sores and to stop bleeding, also with very good results. Like many Māori bush remedies using the bark of trees, experts say it is very important the bark is taken from the side of the tree facing the rising sun.

Chemists have subsequently found the bark contains ellagic acid, which has been used as an astringent in the treatment of dysentery and diarrhoea.