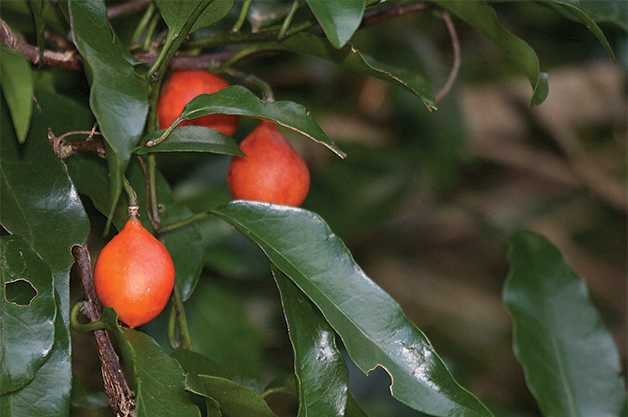 Passiflora tetrandra is from the same family as cultivated passion fruit, and also the introduced banana passion fruit, which has spread widely throughout our native bush, and is now regarded as a weed.

Kōhia is found in lowland forests and forest margins throughout Te Ika a Māui, and northern parts of Te Waipounamu as far south as Banks Peninsula.

It grows in dense thickets, to around 6 to 10 metres tall. The female plant produces a prolific crop of shiny, pear-shaped orange fruit against a background of alternating glossy dark-green leaves.

The fruits are very attractive to birds, possums, and rats, and were highly valued by our Ngāi Tahu tūpuna for flavouring food. They were also used in the production of a fragrant body oil that served as a base in cosmetic and medicinal preparations to treat skin complaints.

The female kōhia only flowers when male and female plants are grown close together for cross-pollination. It produces sweetly scented greenish-white flowers between October and December, and sets fruit about 3 cm long that ripen in April and May.

Traditionally, these berries were harvested and the pulp eaten by Māori, although some sources say the fruit is actually inedible. In Māori Healing and Herbal, Murdoch Riley records that kōhia berries were used as a flavouring for certain jellies made from seaweed.

Riley records that the kōhia vine posed a special challenge for young Māori tree climbers because of its height in the canopy, and the skill required to gauge the ripeness of its fruit from the ground.

“Its fruit are orange when ripe and quite small, being only the size of a cherry or small peach at most,” he wrote. “Of course the other challenge was to climb away up there without falling. If a ladder of plant fibre was not at hand, you had to be able to climb a tree trunk by gripping it with individual toes of the feet.”

In A Field Guide to the Native Edible Plants of New Zealand, author Andrew Crowe writes that New Zealand passion fruit looks and sounds better than it tastes.

The soft orange skin is dry and tastes a little bitter, he says, while the seeds have a slightly bitter flavour like cress, and are embedded in a dry and rather sparse orange pulp.

Māori did use the fruit pulp to paint their faces with a delicate red colour, but historical records suggest it was probably of more value to them for the hinu kōhia (oil) it produced.

Kōhia and tītoki were two of the most important sources of vegetable oils for Māori, and the same basic methods were used to extract oil from both plants.

Berries were placed in a plaited basket. The opening was sewn together to seal it, and the fruit and seeds were beaten into a pulp on a round stone. The fruit pulp was then steamed in a hāngī, and the oil was pressed or squeezed to yield a fragrant body oil.

One of Riley’s sources records Māori shaking the fruit into a new mat, and then wrapping it and placing it in a hāngī for about half an hour. When they took it out, each held one end of the mat and they wrung the oil out into an ipu (calabash).

The fragrance from this process was so strong it could be detected “a quarter of a mile off,” the source said.

On its own, hinu kōhia was used as a salve on chronic sores, old wounds, chapped nipples, or hard or swollen breasts. It was also mixed with a type of (unnamed) moss and kōkōwai (red ochre) to produce an ointment used to treat itches, eczema, and old wounds.

For relief of itching, an ointment was made by drying certain parts of kohukohu (Scleranthus biflorus, a native cushion bush) in the sun, pounding it into a powder and mixing it into a paste with hinu kōhia.

The juice of harakeke roots and hinu kōhia were mixed in equal parts to cure flatulence.

A type of chewing gum was extracted from the stem of kōhia by cutting an incision in the bark on the west side of the trunk in late spring. The oil or gum that oozed out was licked off, but the source of this information said the person then had to chew gum from the pūhā (sow thistle) to prevent poisoning.

There are a few other historical references to traditional uses of this plant as a lashing in house or fence construction, or for binding the likes of adze heads to their handles.

The trunk or stem of the vine could be cut green and allowed to dry, and when set alight, it burned slowly so travellers could carry an ember of fire from place to place.