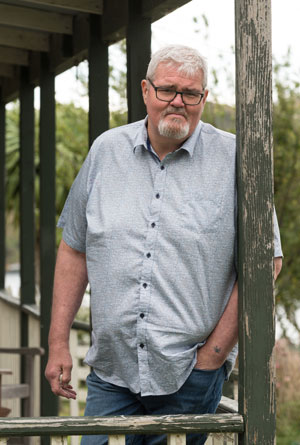 Look out beyond Pūrehurehu
It is he, who caused the sky to turn red in the evening
It is he who caused us to stare into the nothingness

Perhaps it is you who glides over the choppy seas
The majestic albatross who there soars
To where do you soar oh gallant one?
Do you soar over the pathway to the sea?

Those words fall freely from the mouths of our tomorrow.
Those ancestors ensconced in the minds of our future leaders and spread further still.
You rejuvenated the stories of old, returned them to the mouths of the storytellers from the lost pages of history.

When they ask who you are, we will answer
There is the Tūtemakohu of today
There is the heir of Nukutauraro
There is the successor of Te Pahi Revered by the great house of Te Ruahikihiki

You carried the name in the manner that befits the mana. The stars shone down on you
Yet you were devoured by the moon
Who do we turn to now?

My love, my Tahu
My world has been ripped asunder
How will it ever be repaired?
You have been taken from us by Tahu Kumea, by Tahu Whakaero Taken to the cavern of Poutūteraki, to the mansion of Pōhutukawa

What has transpired?
Only the waters of Ōtākou can now be heard.

It is with immense sadness that I acknowledge the loss of my dear friend and colleague Tahu Leslie Karetai Kingi Pōtiki, who passed away in the early evening of Tuesday, 27 August.

Tahu was well-known throughout Ngāi Tahu, te ao Māori and indeed Aotearoa as an orator, an advocate for Māori development, and an expert in southern Māori language, tradition and history. But without a doubt his most important role was as the beloved husband to Megan and pāpā to Rīpeka, Timoti and Tūkitaharaki. My deepest aroha goes out to the whānau at this time, including his mother Rona Pōtiki (née Baddock), his siblings Tanea, Paul and Sandra and his parents-in-law Edward and Alison Ellison.

I also extend my heartfelt condolences to the wider whānau of Te Rūnanga o Ōtākou. Tahu was a direct descendant of Ōtākou rangatira Karetai and Taiaroa, and from an early age he felt a strong connection to the kaik at Ōtākou where generations of his tīpuna, including his father Leslie Robert Lloyd Karetai, lived and were later buried. Tahu was an active member of the rūnanga throughout his adult life, including serving as a chair of the former Executive Committee and of the Rūnanga, and until his passing, as the representative for Ōtākou on the board of Te Rūnanga o Ngāi Tahu.

Tahu was born in 1966 and raised at Karitāne, where he spent many happy days fishing in the estuary with his father and local kaumātua, as well as frequent visits to the whānau bach at Harington Point on the Otago Peninsula. He left home at the age of 17 to pursue a trade trainee qualification at Christchurch Polytechnic, while staying at Te Kaihanga Hostel.

Tahu subsequently attended the University of Otago and Te Wānanga o Raukawa, where he was inspired to develop a series of total immersion te reo Māori wānanga in Te Waipounamu. Over 20 years later, these wānanga are still running through the work of Kotahi Mano Kāika (KMK), the language revitalisation strategy of Te Rūnanga o Ngāi Tahu.

Tahu’s early career focused on social services through his work as a lecturer in the Department of Community and Family Studies at the University of Otago and as the chair of the national committee of Te Kaiāwhina Ahumahi – Social Services industry Training Organisation.

After relocating to Ōtautahi in 1997, Tahu became the head of the School of Māori Studies at the Christchurch Polytechnic Institute of Technology until 2001. He was then appointed as the Chief Executive Officer of Te Rūnanga o Ngāi Tahu, a role he held until 2007. It was during this time that Tahu made what is perhaps his greatest contribution to Ngāi Tahu as the architect of Whai Rawa, the iwi savings scheme, and Ngāi Tahu Funds, a programme that enables iwi members to strengthen their cultural connection and expression. These programmes will serve as his legacy, continuing to benefit Ngāi Tahu whānau for generations to come. Tahu was CEO of the Otago Rūnanga consultancy Aukaha from 2018 until his passing.

Tahu was also a sought-after speaker at conferences and public gatherings, a published author and a regular columnist for newspapers including The Press and the Otago Daily Times. He was well-known for his involvement in contemporary Māori politics and tribal development at a local and national level.

It goes without saying that his passing will reverberate throughout te ao Māori. On behalf of Ngāi Tahu, I would like to acknowledge the many years he dedicated to our iwi and the depth of knowledge and understanding that he added to our kete – these contributions cannot be replaced, and they certainly will not be forgotten. On a personal level, I cannot express how deeply I am going to miss my friend – for his humour, his sage advice, and above all for the big and humble heart that he always wore on his sleeve.