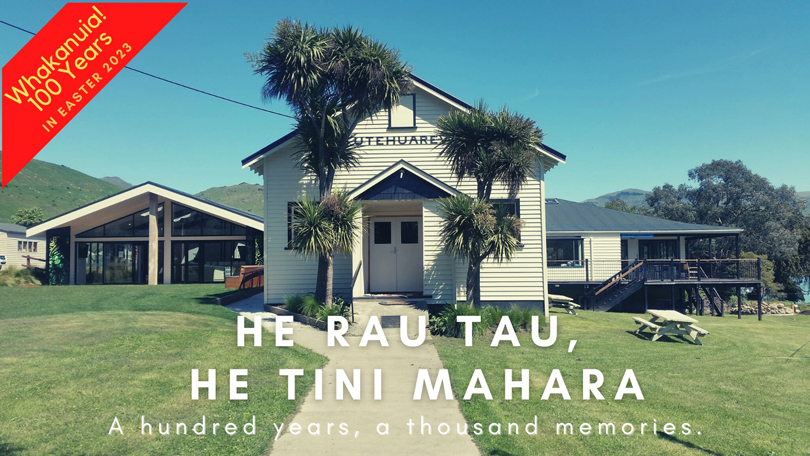 The Hall that holds 1000 memories | Overlooking sparkling cyan sea. Dwarfed by volcanic mountains. Tūtehuarewa, a white weatherboard community hall, stands in the bay of Koukourarata (Port Levy) as she has for nearly 100 years. Whānau and community will celebrate the life of the whare at her centenary celebration in April 2023. They will explore and salute her 100-year-story and turn their minds to her future. But for now, save the date and find out how you can get involved.

He puna mahara | A wellspring of memories Standing on Puāri Pā, Tūtehuarewa has sheltered the people of the local community in good times and bad. Her simplicity, a warm and humble haven for locals and visitors from around the world. Named in honour of an ancestress, Tūtehuarewa has evolved from a no-frills, purpose-built community hall in 1923, into a treasured whare that nurtures the community as it navigates the future. Her story is about the people who built and have kept her warm – mostly generations of the same families. The soldiers that left the hall for war; the parties that heaved her floorboards; the feet that stamped the stage; the smoky card nights; the golden straw before mattresses; the earthquakes that cracked her bones; and the many, many family life events.

Rukua te ruku | Dive the deep dive Whānau who have kōrero, taonga or memorabilia from this colourful stretch of history are encouraged to come forward. There are lots of pieces needed to fill in the 100-year puzzle. For example, the exact date of opening in April 1923 is unknown. Are there old photos or piupiu from the Port Levy Concert party stashed in the back of a wardrobe? Or hui minutes that recall decisions of taua and pōua long gone? Please contact the centenary committee if you can help solve some mysteries.

He tipuna whakaruruhau | Honouring a special ancestor Kaumātua say the strength of the hall is in its name. Tūtehuarewa was a woman who was born at Koukourarata and lived in the 17th century. Moki, who named the bay Koukourarata, gave Tūtehuarewa the responsibility of looking after the children when he and his war party left indefinitely. In honour of her duty, the whare – also tasked with nurturing future generations – was named for Tūtehuarewa 200 years later. She remains the ūkaipō (the home place) for all generations.

Whakahaumaru kōtahi ai te iwi | Shelter the people together. The 1920s-built hall was the result of hard work of both Māori and Pākehā. The Great War’s solemn shadow, an economic recession, early urbanisation and the making of ‘modern’ New Zealand were eroding hapū and community life – a unifying, focal point was needed for the remaining population. The local yachting fraternity held regattas and the Māori Concert Party performed to raise funds for the new build. Today Tūtehuarewa is flanked by Te Pātaka o Huikai (the wharekai) and the modern whare wānaka. But there have been other buildings, trees, paint jobs, sheep and tenants that have come and gone.

As centenary planning gets underway, thoughts turn to those ancestors whose foresight created a legacy that still calls the people together today, under the enduring protection of Tūtehuarewa.