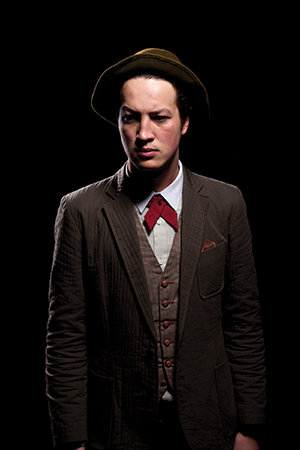 Marlon then joined Delaney Davidson for a series of duet albums called Sad But True – The Secret History Of Country Music Songwriting, winning the New Zealand Country Album and Country Song of the Year in 2013.

He moved to Melbourne that year and quickly built a following through live performances. He releases his debut solo album in April.

What constitutes a good day?
Hanging out with loved ones with no fixed plans.

One thing you could not live without?
I guess I definitely couldn’t live without a guitar. As in it’s my only way of paying rent!

Who or what inspires you and why?
Music of all kinds inspires me. I don’t even have to like it and it’ll still get my mind working in the way I need it to create.

Highlight in the last year and why?
Playing a show at the Wunderbar back home in Lyttelton on a Friday night, then getting on a plane straight after the show and flying to Sydney to play at the Sydney Opera House the next morning was an insane but incredible experience.

What is your greatest extravagance?
Bluff oysters! If I had my way I’d spend the rest of my life listening to honky tonk music with a bottomless plate of the things.

Favourite way to chill out? Favourite place?
A glass of beer and a game of chess at a mate’s house.

Dance or wallflower?
Usually wallflower, but in exceptional circumstances I can be known to flop my way around the d-floor like a semi-inflated balloon man.

What food could you not live without?
See above! I’m a pretty classic Kāi Tahu boy in that regard, anything that tastes like the ocean.

What meal do you cook the most?
I’m a pretty lazy cook, but I learned how to make ika mata recently and that’s my go to on a hot Melbourne day.

Greatest achievement?
I’ve been recording music for a while now but only recently finished my debut solo album. It feels really good to have done something solely in my own name. It’ll be out on April 24.

Do you have an aspiration for Ngāi Tahu to achieve by 2025?
By 2025 I’d like to see te reo speaking (particularly Kāi Tahu dialect) back on the rise, myself included. The older I get, the more I believe the language is integral to understanding the tikanga.