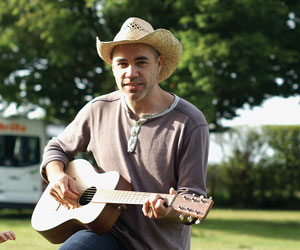 Peter Meteherangi Tikao Burger (Ngāi Tahu, Rangitāne) is a film and television director living in Auckland (where the work is). Peter moved into drama after seven or eight years making television commercials. In the past year he has worked with Sam Neill and Oscar Kightley on the gritty cop show Harry, and Nigella Lawson in a chocolate commercial. He directed horror movie The Tattooist a few years ago, but most of his work in the past few years work has been New Zealand telefeatures, such as the one he’s just finishing about conscientious objectors in World War I. Peter’s hapū are Ngāi Tūtehuarewa, Ngāi Tūāhuriri, Ngāti Kurī and Ngāti Irakehu.

What constitutes a good day?
A good day is a day when I have created something at work that makes me feel emotional in some way, and then at home, the family can make it through the evening without getting too emotional.

One thing you could not live without?
My feet. Obviously that’s not technically true; there are plenty of people who do live without their feet. But mine are slowly getting worse thanks to club feet when I was born. They have served me almost faultlessly for nearly 40 years and are now starting to complain, so I’m appreciating them right now. Probably I’d be wiser to be appreciating my head; I’d really be stuffed without that.

Who or what inspires you and why?
Generally I look to filmmakers for inspiration, since that’s my line of work. The screenwriter Charlie Kaufmann is inspiring, partly because despite his genius he doesn’t seem to have his life any more sorted than anyone else. My mother is also a source of inspiration, but as I recall, was also a source of great frustration when she was alive. I guess part of gaining wisdom is knowing not to view anyone at all with too much reverence.

Highlight in the last year and why?
Although travelling for work is always fun, the most joy I have had in the past year would definitely be the cumulative effect of hanging out with my wife and kids – especially trying new things with them. Recently we tried skiing for the first time, and fishing. One was a failure, I won’t say which.

What is your greatest extravagance?
Gee that’s a tricky one. I’d love to say I’m extravagant cos extravagant people seem fun. But in truth I think I’m the handbrake, financially speaking. We don’t even have Sky.

Favourite way to chill out? Favourite place?
My favourite way to chill out is with friends, particularly over the Chrissy and New Year break, the only time when everyone’s not working their butts off. Every year we share New Years with the same group of friends that I used to play drinking games with.. It’s like the Big Chill without, for the most part, the histrionics. The place doesn’t matter so much as the friends. (Also, I love a good shoot ‘em up on the Xbox. It’s my dirty secret).

Dance or wallflower?
Often in life I worry I can get a bit too wallflowery… worrying is a sure sign of that. But not, funnily enough, when it comes to dancing. I love to dance and am happy to make a dick of myself doing it.

What food could you not live without?
Fish. Nom nom nom. Smoked kingfish is my absolute favourite, partly because I almost never get to eat it. So you’d hope that when I tried skiing and fishing, the skiing was the one that didn’t go well, eh?

What meal do you cook the most?
The food I prepare the most is a peanut butter and honey sandwich. White bread, same as I did when I was 14. Other than that, a good old roast. Simple to prepare, and you can chuck as much meat and veggies into the oven as you’ve got guests coming round. Not particularly inspiring, but always a winner.

Greatest achievement?
My children are both clever, healthy, interested, active people. They are a joy to watch growing up and I’m proud of my part in that.

Tell us about an aspiration you have for Ngāi Tahu to achieve by 2025?
As much inclusion as possible. Ngāi Tahu has such wonderful resources now thanks to fierce battling followed by wonderful management; the challenge now is to keep finding ways to remain relevant to the people of Ngāi Tahu and our uri. What is it that unites us in our identity, what hopes and fears do we share, and makes us different from all others, Māori and non-Māori? Not just how do we come together, but why? I don’t have answers, but I do know that modern society tends to pull people away from each other, rather than together. The Ngāi Tahu challenge is to continue to bring people physically closer, so that we can share our stories and strengthen the bonds between ourselves individually, and as an iwi.