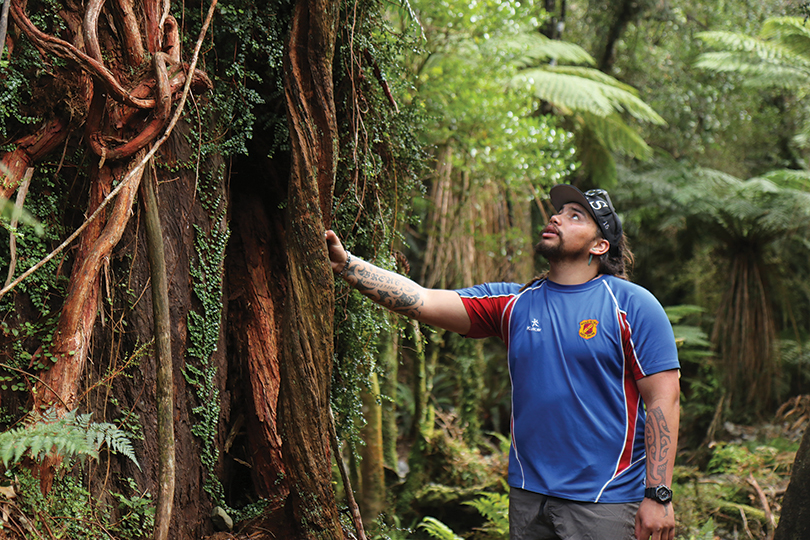 Kahurangi was raised on the West Coast and has always been fiercely proud of his Poutini Ngāi Tahu and Ngāti Porou heritage. He attended Hato Pāora College in the North Island, originally intending to study archaeology. However, at the age of 14, Kahurangi was lucky enough to discover his true calling while on a hīkoi in the Hollyford Valley, and he changed his career aspiration to Cultural Heritage guide – which he’s been doing ever since. Today, Kahurangi is a self-employed guide and programme co-ordinator who runs a number of programmes that introduce Ngāi Tahu rangatahi to the whenua and their culture.

What constitutes a good day?
Waking up.

One thing you could not live without?
Connection – with people, with te ao Māori, and with the taiao.

Who or what inspires you and why?
I am inspired by many things in life: my brothers who fought the odds and changed their lives for the better, and members of my whānau who have all fought their own battles in some way and become stronger for it. However, my biggest inspiration is easily my mother, Kara Tui-Alice Edwards. A wahine toa in more ways than one, a matriarch, a protector, a provider – all while raising two kids by herself; instilling strong whānau values and self-identity, giving me a strong hearty base to create any kind of life I wanted. Without my mother’s unflinching love and support I wouldn’t be able to live this crazy, exciting life of mine! So in turn, I owe my life, my legacy, and all my heart to my mum, who told me: “Always remember that when you were born, you got half my heart and half your father’s ihi.”

Highlight in the last year and why?
I can’t think of just one – had a mission every month and they were all highlights! From running two Te Ara Whakatipu hīkoi and Mātauraka ki Taumaka hīkoi, to being privileged to sail on a waka hourua ko Hinemoana – and the list goes on! Engari, kā mihi nunui ki kā kahi katoa me te āwhina mai i ahau.

What is your greatest extravagance?
My 1995 Sportster.

Favourite way to chill out?
Bob Marley or Katchafire blasting out of my headphones or car stereo while on the cruise between missions.

Favourite place?
Anywhere along the West Coast, from Karamea to past Piopiotahi.

Dance or wallflower?
Dancing with the wallflower (well, trying to).

What food could you not live without?
Meat!

What meal do you cook the most?
Meat on toast!

Greatest achievement?
Finishing kura. To drive up this massive driveway as a young boy and to come out five years later a strong, confident young Māori with the tools to create any kind of future for myself. Not to mention the brothers! Boys that grow into men together, that will have each other’s backs even after death – a connection that can’t be broken, the brotherhood, my mates, my brothers, BFFLs, the broz! Shout out to the one and only Hato Pāora College!

Do you have an aspiration for Ngāi Tahu to achieve by 2025?
I would like to see the continuous strengthening of our reo and mātauraka Kāi Tahu. I would also like to see more of our tākata Kāi Tahu working for, with, and running Kāi Tahu. Really, I just want our people to thrive in a Māori world that we’ve helped to create. Whāia te tika – follow the path of righteousness.