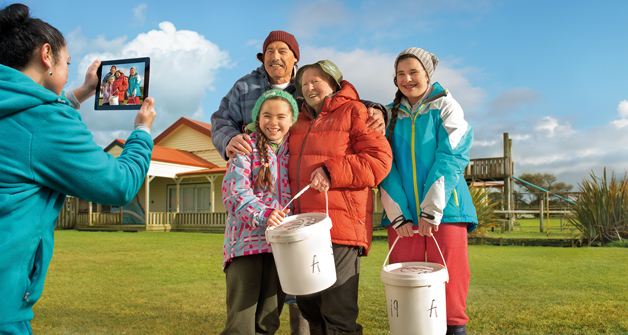 Jane Davis, known to most as Aunty Jane, is a stalwart of Te Kerēme – The Ngāi Tahu Claim.
Born and raised in Murihiku, she has always had a strong connection to the Tītī Islands, which was shared by her late husband, Bill. The two of them became involved in Te Kerēme in its early days, and in 1989 Aunty Jane was elected to the Ngāi Tahu Māori Trust Board.
After Bill’s death in 1992, she continued their work, and played a key role in the return of the Crown-owned Tītī Islands. She and Bill had four children: Rewi, Tāne, Patu (who sadly died in an accident), and Karina. To this day Aunty Jane continues her mahi for the iwi by serving on Te Pae Kōrako, and is very active in her rūnanga.

What constitutes a good day?
I try to make every day a good day. There will always be some days that are more difficult than others. A fine clear morning and the tūī calling me to hurry up and fill his sugar water bowl is a good way to begin my day.

One thing you could not live without?
My family are precious to me.

Who or what inspires you and why?
I think Te Arikinui Te Atairangikaahu. Our late Māori Queen was an inspiration to many women. She was a graceful lady with a quiet inner strength and honesty. Nelson Mandela was such an inspiration to his own people and to all people throughout the world who suffer under the yoke of racial discrimination. Closer to home, the members of the Ngai Tahu Māori Trust Board were an inspiration to me. They, with many pōua, taua and whānau from all of Te Waipounamu with a small committed staff completed Te Kerēme, the Ngāi Tahu Claim that our whānau had carried for seven generations. Many of our whānau put their lives on hold during that time so they could support the Claim. It was a time when Ngāi Tahu had to stand together as one people for the greater good of all. That was inspirational.

Highlight of your last year and why?
The recent journey to Whenua Hou has been the highlight of this year for me. The unveiling of those beautiful pou was an absolute joy.

What is your greatest extravagance?
I like good perfume, which is usually expensive.

Favourite way to chill out? Favourite place?
In my garden.

What food could you not live without?
Fruit.

What meal do you cook the most?
Beef steak stew.

Greatest achievement?
Being part of achieving The Ngāi Tahu Settlement.

Do you have an aspiration for Ngāi Tahu to achieve by 2025?
I believe the long-term future of Ngāi Tahu is in remaining together as one people. There is strength in numbers. To split apart weakens the whole system.