A new café and cookery school in Ōtautahi is serving up healthy, uniquely Māori style kai with a contemporary twist on the traditional.
Kaituhi Alice Dimond reports. 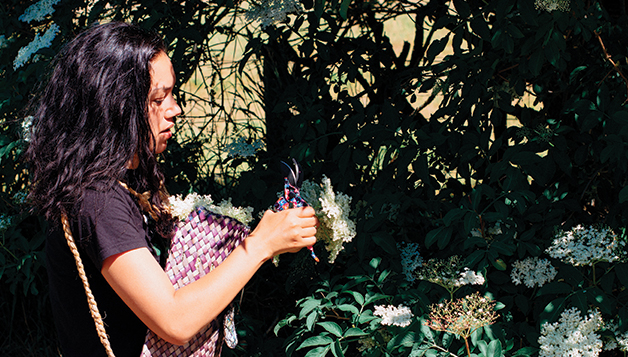 Solutions to widespread illnesses within Māori communities, such as diabetes, obesity and heart disease continue to be elusive. There’s one woman however who sees the value of getting her fingers back into the whenua, and believes this could be part of the solution. Jade Temepara (Ngāi Tahu, Kāti Māmoe, Ngā Puhi, Ngāti Tūwharetoa) is a woman on a mission, and her message is clear. “The goal is to ensure whānau are healthy, whole, happy, and thriving.”

Jade is the sort of person who makes you wonder if she has got her hands on Hermione Granger’s time-turner. At the age of 34, she runs a successful not-for-profit organisation, homeschools her five children, and recently opened a café and cookery school. Despite her incredibly busy schedule she appears to have her life completely in order, moving seamlessly from one commitment to the next.

Raised by a single mother, Jade knows that a little bit of help can go a long way. Her upbringing is what drives her desire to help other families who may be struggling. The plan is to do this by educating whānau about the value of growing produce in their own backyards.

Jade was born in Invercargill and credits weekends spent with her koro for sparking her interest in gardening, and in particular growing kai. “Both my koro are of similar age and I have never known them to not live off the land,” says Jade.

As a young mother, Jade lived with her family in Ashburton and spent her spare time as a volunteer at a solo parent organisation called Birthright. While there, she noticed how many solo parents were struggling to feed their children good food. “One woman was feeding her four-month-old baby cold spaghetti out of a can, and it really shook me,” Jade says. “It got me thinking about how I could show these people some of the skills I had.” It prompted her to start “Hand Over a Hundy” in 2010.

Hand Over a Hundy works by sponsoring whānau $100 to buy seeds, seedlings, compost, and seed raising mix to start a garden. The whānau is then matched with a mentor, who over four seasons teaches them how to grow fresh produce in their own backyard, as a step towards self-sufficiency.

The challenge is that the whānau recoups the $100 that was initially given to them by either saving themselves money on food purchases, or by selling their extra produce and seedlings. The family then hands over the “hundy” to another family to start the process the following year.

“Hand Over a Hundy started with this need to connect people with the land again, and at the same time teach them how to feed themselves and their children fresh, healthy, chemical-free food,” says Jade.

She believes that whānau can save up to $1200 a year by growing food themselves. However the true value of the programme stretches much further than the monetary value, Jade says. Togetherness, health, and exercise are some of the other benefits.

The programme also works to educate whānau in customary Māori practices by making use of techniques such as using moon phases to determine peak planting periods. “A lot of our traditional practices are really simple and can be adapted and utilised really easily today,” Jade says. The initiative also has a Hua Parakore, a pure product focus. Only organic seedlings, seeds, and compost are used.

Although Hand Over a Hundy started in Ashburton, the programme’s success has seen centres open in locations including Southland, Canterbury, Waikato, and Auckland. Work on opening branches in Rotorua and Wellington is underway.

Hand Over a Hundy is primarily run from public donations, and Jade has not been paid anything for the time and energy she has put into it over the past six years. Its success, combined with Jade’s own impressive garden, saw Jade honoured with the 2011 New Zealand Gardener of the Year award, and a Silver Award at the Ellerslie International Flower Show in 2012. She has also spoken at a number of conventions and seminars, which is how she originally came up with the idea to expand her services.

“I noticed there was a low-to-zero representation of our people at these seminars, and it really concerned me, because we have the highest risk of everything known to kill us. It made me think about how to get this education out to whānau in a way that we would respond to.

“Something that is really natural to us is whanaungatanga and manaakitanga. I also knew that we all love eating, especially eating our own kai, and the process of gathering our own kai. I knew we needed to incorporate these things in order to draw our people in.”

Kākano Café and Cookery School, which opened in late February, is the outcome of Jade’s desire to help people by connecting Māoritanga, business, education, and employment.

The café serves healthy kai, which is uniquely Māori. The menu is primarily in te reo and includes tītī pies, raw fish, hāngī, and pūhā juices.

“People have forgotten that our own kai is the best for our bodies, and that there is an easier way to approach the lifestyle changes we all need. We need to do it using our own kaupapa.”
Jade Temepara

Jade and her team have built an expanse of gardens on the site, which is leased from Life in Vacant Spaces, an independent trust that matches creative people with vacant spaces in the city. The idea is that the food is gathered from the gardens and prepared just like our tīpuna would have done in the past.

“People have forgotten that our own kai is the best for our bodies, and that there is an easier way to approach the lifestyle changes we all need,” Jade says. “We need to do it using our own kaupapa.”

At nights the café will take on the role of a cookery school, through seminars that teach whānau and the wider community how to make kai using fresh and healthy ingredients. Some of these classes will have a cost, and others will be free, to ensure no one misses out. “We are setting it up as a social enterprise, and that means we have to make a profit, hence we have a café. Our profit is then invested back into whānau and the community,” says Jade.

On Friday nights Jade also plans on running hāngī and movie nights. “This will be a chance for whānau to come down with a blanket, have a kai, and just connect with each other,” she says.

To get the enterprise started Jade was supported through funding from Te Pūtahitanga o Te Waipounamu, the South Island commissioning agent for Whānau Ora. The social character of Kākano also includes offering employment to people who may not otherwise be able to find jobs, giving work to the homeless in some cases. “We also want to create a market for Māori growers by using their produce whenever possible.”

The name of the café, Kākano Café and Cookery School, represents the dreams Jade has for the project. “I am a seed saver, that’s my first passion,” says Jade, “and ‘kākano’ means ‘seed’. The name represents the potential of what we are going to do here. A seed holds life and potential, but until it is put into the soil it does nothing. It is still. The whole parable of a seed in its entirety represents a chance for it to be planted somewhere and grow into something. That is what we are trying to provide for our people.”

By creating an enterprise that combines kai, business, education, and employment, Jade hopes to create food sovereignty and food resilience for Māori. “I don’t want to take anything away from marae, but sometimes it is the only time we are able to come together and have our own kai.”

“We need to be growing on our own land and we need to be thriving and celebrating our kind and showcasing it. We have been hiding for too long, so we need to bring out who we are. We are absolutely the most beautiful people with the most amazing food. So we should celebrate this and not be afraid that it doesn’t fit this current system. We shouldn’t worry about that because this current system doesn’t fit who we are… and we have evidence of that because we are all sick.”

One of Jade’s goals for the future, she says, is to increase her use of te reo Māori with her children. “It hasn’t been a priority at this point, but I know eventually it needs to be. When you start to reconnect with the land and your environment, then you start to want to connect with every part of that and every part of who you are. So I definitely want to make that a priority this year.”

At the café she says she will encourage her workers to use te reo. “It is vital for us, because we don’t want to be one without the other. We want to celebrate everything. The reo, the kai, the whole lot.”

Starting with a passion for gardening, Jade Temepara’s ambitions may very well be the next step to ensuring our whānau are healthy and thriving. “It’s about everything: employment, enterprise, education, health, wellbeing, connectedness, and just feeling comfortable in a community we have felt quite distant from for a long time.”