I have had to face a new challenge in my māra this summer with the arrival of a new type of pestilence in the form of a very cute golden retriever puppy called Millie (a.k.a. “the destroyer of worlds”). My whānau thought a new puppy would be a good idea, but didn’t reckon on her ability to chew, dig and destroy anything that takes her fancy. The māra wasn’t spared her destructive youthfulness, so we have had to put up a fence around it to keep her out (as much as possible). She still managed to destroy my sprayer which I have used since 1994, and it wasn’t until it was gone that I remembered how important it was for helping support plant growth. I noticed that the plants weren’t doing as well as normal without their weekly spray of liquid fertiliser, so I bought a new one.

Organic liquid fertiliser is the most effective way to provide optimum plant nutrition, particularly for trace minerals in the summer months when growing plants need them the most. I usually use an organic compost tea and/or seaweed mix. I always spray before 8 in the morning as this is the time when the plant leaves (stomata and epidermis) are most open for taking it in. Foliar fertilising of trace minerals by spray is estimated at being around 10 times more efficient than mineral delivery via the soil. 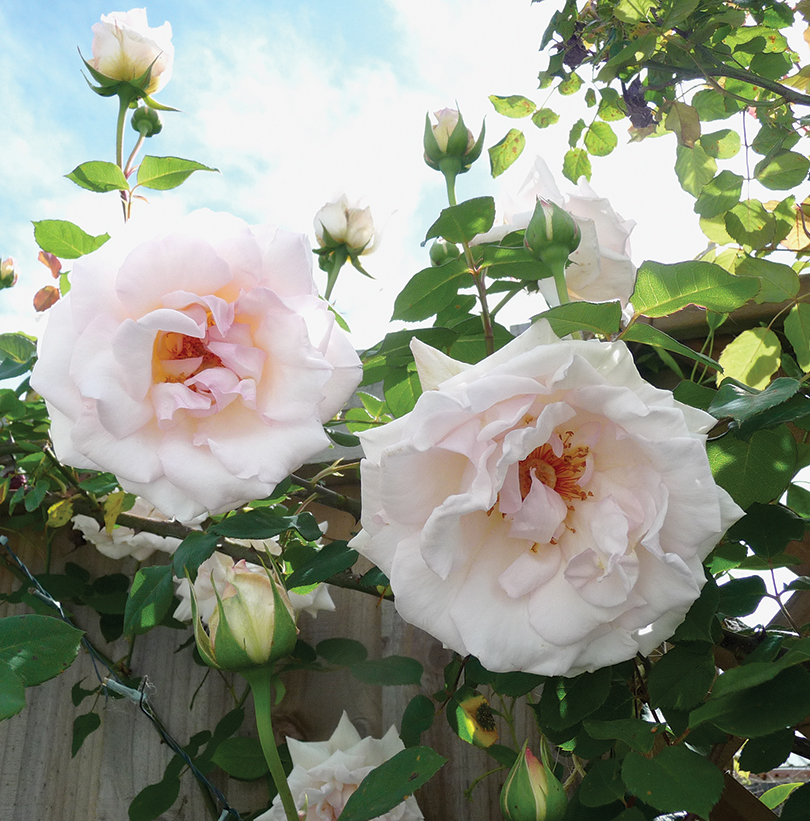 Above: white roses in full bloom.

These trace minerals are equally important in our own wellness and resilience. The minerals are best derived from eating plants, through which they are 98% bio-available, as opposed to expensive pills that come in a bottle and have less than half that efficiency. I have also found another use for my new sprayer, which is to spray plasma-enhancing products as well. 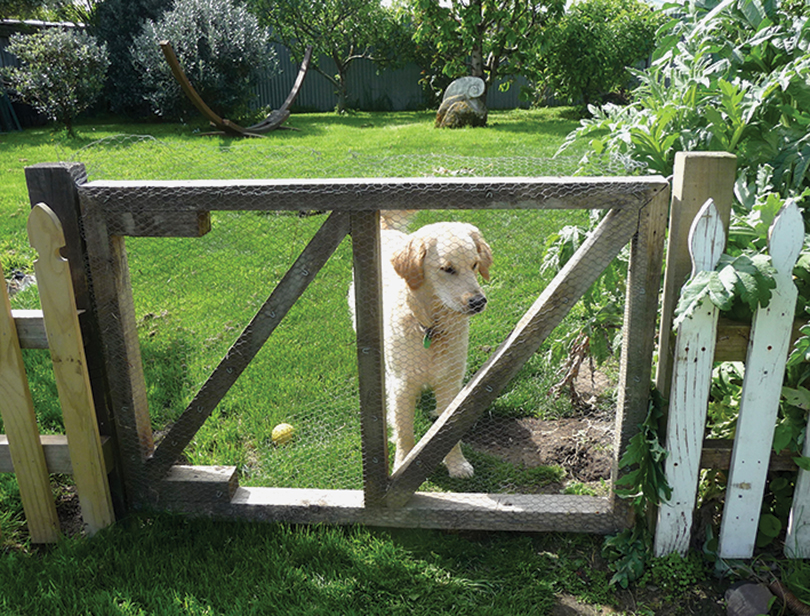 Above: keeping Millie out.

Plasma agriculture
I recently came across the Keshe Foundation, which was founded by the Iranian nuclear physicist Mehran Tavakoli Keshe. He has developed some interesting theories around the nature of how the universe works, and how this can be applied across many fields of human endeavour, including agriculture. His theories are based around plasma and how it works, from the largest galaxies to the smallest organisms. Plasma can be very difficult to understand, but here is my attempt at a brief explanation:

Plasma is a combination of primarily two different types of magnetic fields, which are created through the interaction of at least two or more of the same strength plasmatic magnetic fields. It’s a dynamic field interaction which creates a toroidal (ring-shaped) field structure (see image, left). The flow of these fields is made up of magnetical and gravitational fields. Magnetical fields can be defined as the interaction of different magnetic fields of different strengths, creating the initial seeds of the plasma, which are outward-flowing. Gravitational fields are the inward-flowing fields. The coexistence and interaction of these magnetic and gravit-ational field-forces leads to the creation of a magnetosphere for all entities (galaxy, sun, planet, tree, bird, human, worm, bacteria, etc.). 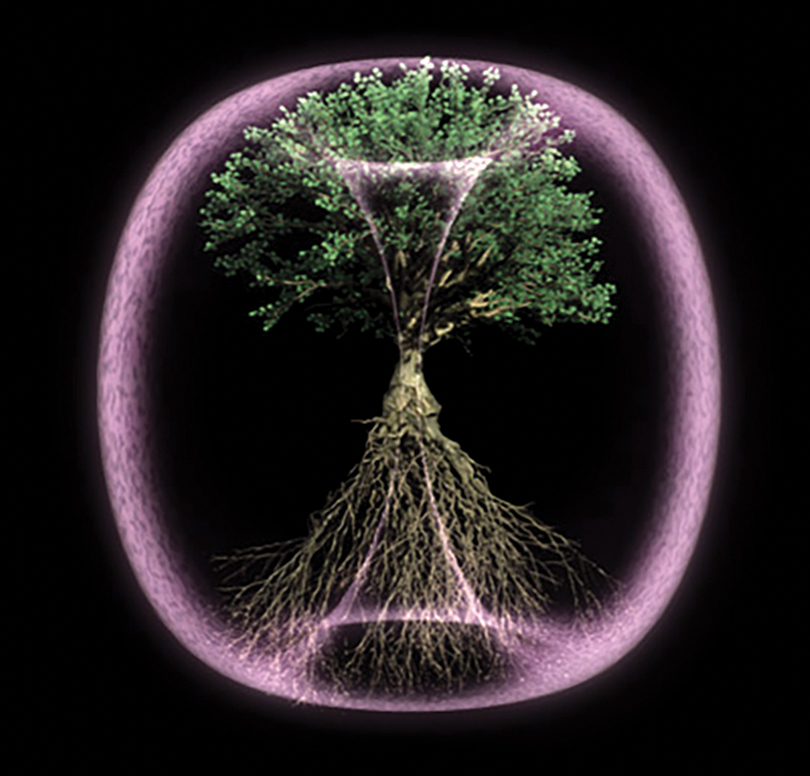 Above: a representation of the interaction of plasmatic magnetic fields, creating a toroidal (ring-shaped) field structure.

OK, I know you are thinking, “But isn’t plasma energy just another word for mauri?” To which I would agree, but wait – it gets better. Keshe believes that it’s the interaction between the soul (wairua) and plasma (mauri) that gives life to all living things! OK, so our tīpuna and tohunga understood the basics of plasmatic theory long before Keshe, but I digress. Keshe and his followers are trying to apply this theory to develop new technologies that can help with renewable energy, health remedies, space flight, and agricultural applications.

According to plasma theory, plants primarily grow by interacting with magnetical and gravitational plasmatic fields. 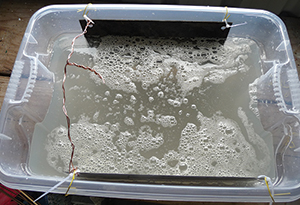 So what does this have to do with gardening? According to plasma theory, plants primarily grow by interacting with magnetical and gravitational plasmatic fields. As such, Keshe and his colleagues have developed products that can be used in agriculture to support and promote the plasmatic fields of the plants and soil through the use of GANS-based products. GANS can be defined as a new state of matter consisting of a molecule of gas (“GA”) which becomes a nano (“N”) of itself and appears as a solid (“S”) state of matter: GAs to Nano Solid = GANS. GANS can be created in many different ways, but primarily it is done through the interaction of different types of metal plates in a water solution that creates magnetic-gravitational plasma field interactions to produce the desired type of GANS. 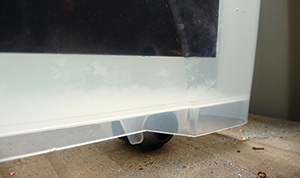 Above: GANS can be seen as snowflakes falling off the metal sheet.

Research conducted using the different GANS on plants has produced healthy plants that are pest and disease resistant, have a longer shelf life, extended growing seasons, and higher yields. Exponents even claim that using selected GANS material in rivers and waterways has reduced biological and heavy metal contaminants.

I tried to make GANS myself, but gave up when I realised how much time it would take to figure out how; so instead purchased three Plasmatic Plants GANS gardening products from Australia to test in my māra:

1. Leaves – to spray on plants to boost nutrient uptake through leaves
2. Soil – to improve the health of soil and plants
3. Seeds – to enhance the growth of seeds sprayed with this before planting.

These products come in 250ml bottles and are used by diluting 1ml of GANS per 1 litre of water. I use my sprayer to apply it to the soil and plants, and a smaller hand-held spray bottle for spraying seeds before planting. I only started using these products in late spring and so far they appear to be good value for money. While it is too early to come to any definitive conclusions, they do appear to be helping with plant health and productivity. In some ways they are similar to the preparations used in biodynamic farming, with the key difference being that GANS products can be used without reference to the moon calendar; making them easier to work with than biodynamic preparations. The Keshe Foundation claims that plasma technology in agriculture will herald a new age of enhancing the health and wellbeing of soils, plants, and food.

These claims are yet to be independently proven, which is why I am testing them out in my own māra. I hope others in Aotearoa also take up the challenge to test these products to find out how useful they potentially can be. If you do give them a go, let me know how you get on.