Five years after the first big Canterbury earthquake of September 4 in 2010, I am still in recovery mode in the māra. Every time I think I have finally done the last piece of work around the place, something else in need of tidying up becomes obvious. Fortunately these things are becoming less frequent and while they aren’t big issues, they are a constant reminder of the disasters we have been through. Even just seeing the quakes in Nepal on television can bring back sleepless nights and reminders of the fear and despair destructive earthquakes can bring randomly out of the blue.

However, the spring sunshine and new warmth bring the promise of blossoming new life to the māra. Getting stuck into the work helps, as does the sunshine and free vitamin D (so vital in recovery from cancer). Some interesting research I came across recently shows that a bacterium found in the soil, Mycobacterium vaccae, has been found to stimulate the release of serotonin, which in turn can make people feel relaxed and happier. This mycobacterium can be taken up through touching the soil, inhalation, and through the vegetables that get eaten from the māra. Apparently, it also curbs inflammatory reactions in the body. It has been found to be useful as a treatment for depression and cancer, as both are in part inflammatory disorders. An added bonus is that this mycobacterium does not appear to have any side effects or chemical dependency potential. By itself I doubt it can cure cancer (or depression), but I do know that the holistic natural approach I have taken to treat my cancer reflects in my latest scan, which shows that my pancreatic tumor continues to shrink. I have put on weight, and the blood marker for this particular cancer is now in the normal range for the first time since my diagnosis just over three years ago. This is still a long way from being in remission, but positive progress nonetheless; with one of the main side effects being that I have far more energy to get stuck into working in the māra. 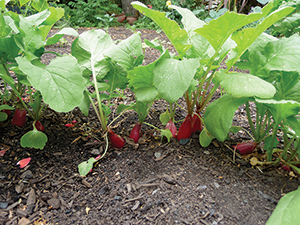 This is just as well, as spring is the busiest time of the year with the need to bring in compost, dig in the lupin cover crop, and to spread dolomite lime and Rok Solid mineral and trace elements fertiliser. My tunnel house can now be planted in lettuce, zucchini, and tomatoes (cucumbers and capsicums late spring). Outside, lettuce, silver beet, spinach, kale, broccoli, spring onions, celery, strawberry plants, parsley, and coriander can be planted. Late spring will be the time to plant some rīwai (potatoes), beans, and zucchini.

Spring is also the time to start applying liquid fertiliser to these newly established plants once a week.

After the quakes I forgot about my old worm farm. I found it again recently and decided to get it working. There was some leftover humus/compost material at the bottom of the two trays which hopefully contains some worm eggs, so I will mix this with:

• shredded newspaper (minus any colour photos/displays) that has been soaked in a bucket of water
• last season’s compost I dug out of the tunnel house
• a couple of trays of specialist tiger earthworms (Eisenia fetida/andrei) I have purchased. 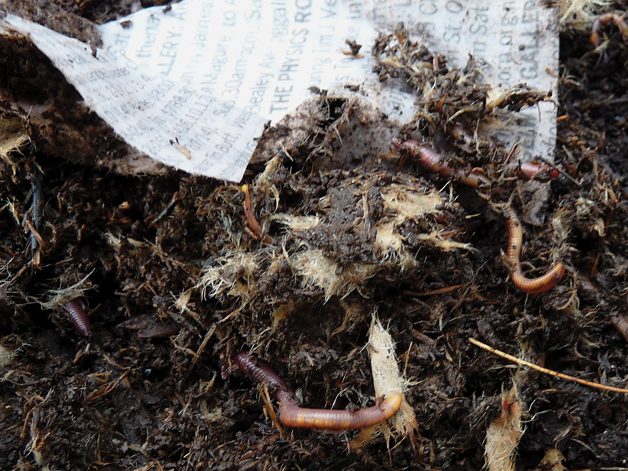 Once this mix is placed in the trays, I will add fresh cut-up vegetable material from the garden on top (citrus peel, fats, oily food, and onions are best avoided). I will top this up occasionally with leftover vegetables from the juices I have every day. One mistake
I made in the past was to put too much vegetable food in before worm numbers could build up, as it takes time (three to six months with this type of worm farm). Another mistake was to not put some lime (not dolomite type) on every two weeks to avoid the environment becoming too acidic. The worm farm also needs to be kept damp and out of the rain and direct sunlight to provide the best growing environment. 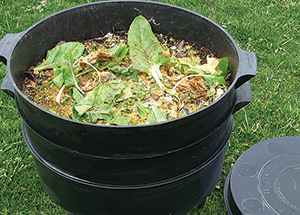 The reward of the vermiliquid fertiliser (diluted 10 to 1) from the worm farm is well worth the effort, as it contains many beneficial nutrients and microbes which help promote soil health and plant growth naturally. In hindsight I suspect that my first attempt at a worm farm was relatively unsuccessful because of the high lead levels and other heavy metals in the vegetable scraps I fed the worms. At that time, I was not aware that the soil of my māra was contaminated as a result of poor historic land use.

I have finally found space at the back of the old garden for the three feijoa and two apple trees that had to be moved for the house rebuild. I have kept the fruit trees, as according to studies, their fruit do not accumulate heavy metals. However, I will test some of the fruit in the late summer. Feijoas contain comparatively high levels of the compounds that enhance anti-inflammatory and anti-oxidant activity. The feijoa trees are now in their final positions amongst the older established fruit trees. This got me thinking that while these fruit trees are in toxic soil that I could try a phytoremediation experiment, which would involve trying to remediate the soil using plants that can grow in toxic soils and absorb heavy metals (hyperaccumulators). I have read that the best plants to trial as hyperaccumulators would be Indian mustard greens (Brassica juncea), ornamental kale (another Brassica), and sunflowers. An extra bonus from the kale and sunflowers is that they will be aesthetically pleasing. While fruit tree roots normally go down further than these plants, the soil testing showed that the lead in the soil stays in the top 30–40 cm of soil and doesn’t leach down, so their deep roots should leave the fruit less vulnerable to contamination. The hyperaccumulator plants will have to be disposed of in the ordinary rubbish bin, not the green waste bin used for council composting. Hopefully, if this experiment works to drastically reduce the lead level in the soil, it may be possible to remediate the rest of the property using this low-cost
solution.