These are two pretty comfortable words. We say them all the time – a casual greeting that just rolls off the tongue. They are also the name of a recent He Waka Tapu initiative – 0800 HEY BRO. It’s a helpline for tāne who feel like things are getting too much, and need someone to talk to so they don’t reach a point where they might harm themselves or a loved one. Kaituhi Matthew Scobie reports. 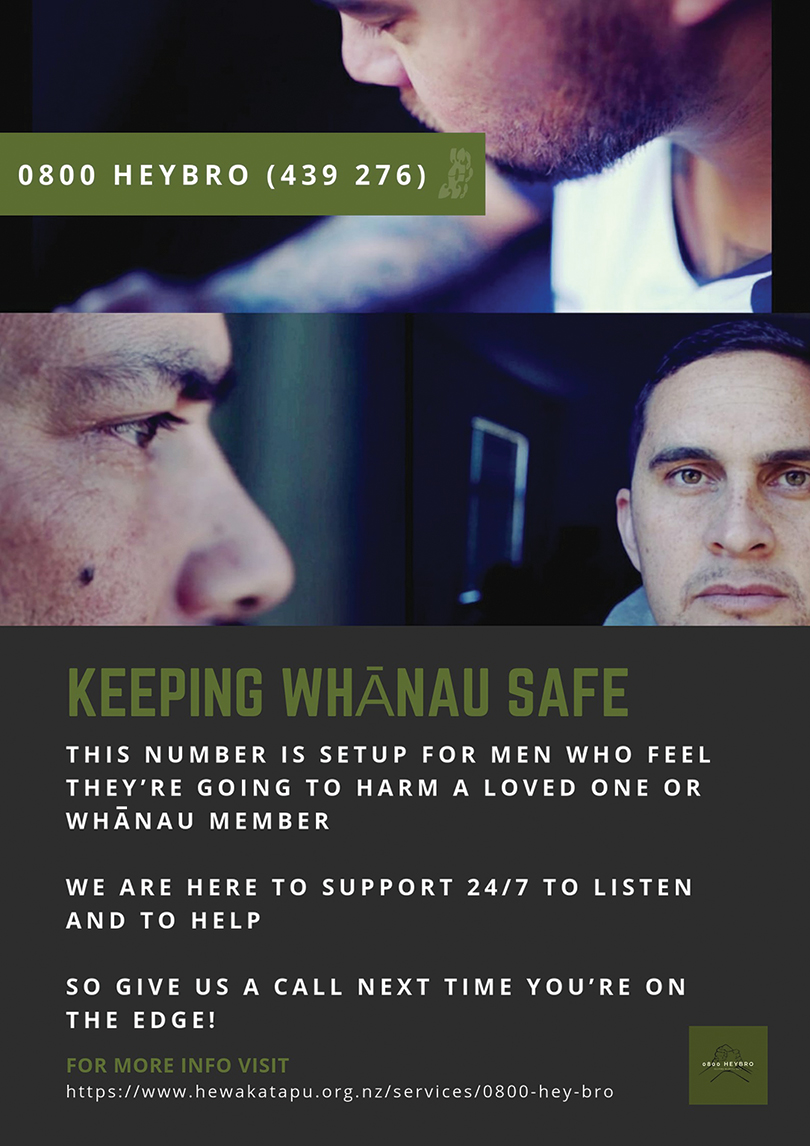 For Damien Petersen, the creator of 0800 HEY BRO, it was about recognising the failure of our system to provide preventative support for vulnerable tāne. Generally, the first time people come into contact with the support they need is after a crisis – the ambulance at the bottom of the cliff, rather than the fence at the top.

“I was sitting in a room full of men who were mandated to be there, but with no preventative support, and I saw a need. This wasn’t a want, it was a need for our people,” says Damien, who is the Family Harm Reduction leader at He Waka Tapu.

The idea formed when he was lying in bed talking with his wife of 22 years. They discussed the fact that if something bad happened between them, she would have victim support but he would have no one to turn to; and neither would have any preventative support. They identified the importance of providing support for tāne to work through healthy relationships too. This is the whakapapa of 0800 HEY BRO – a couple reflecting on their relationship and the challenges in the world, and supporting one another to come up with a solution to help others. It is also the essence of kaupapa Māori – with solutions identified by people who know the challenges intimately, and work together to overcome them.

From the beginning, it was clear that 0800 HEY BRO could be a natural fit with He Waka Tapu, a kaupapa Māori and whānau-led organisation which has been operating in Ōtautahi for almost 25 years. Beatrice Brown, Domestic Violence/Family Violence Manager at He Waka Tapu, was quick to back the idea; acknowledging that it is important to offer help to tāne as well as wāhine.

“Both need support to make a relationship work. If only one is getting support, it’s not gonna work.” 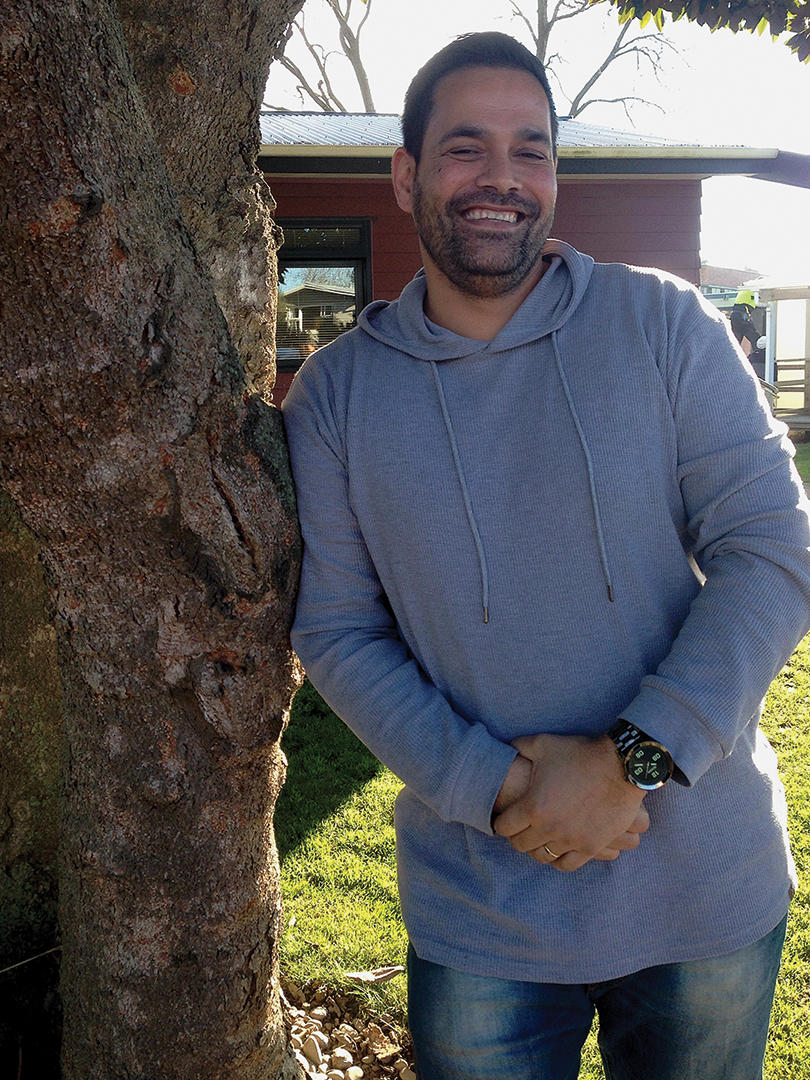 He Waka Tapu got behind the kaupapa of 0800 HEY BRO, and supported Damien and his colleague Matiu Brokenshire to set it up. For the first few months, it was just Damien and Matiu on the phones – two tāne there 24/7 to talk to callers who might be feeling angry, isolated, or frustrated by their situations. When Damien reflects on these early days, he says they might have been “pretty green” about the practicalities of running a helpline, but their own experiences and the work they had put into the kaupapa meant they were able to connect with the tāne who called them.

“I was sitting in a room full of men who were mandated to be there, but with no preventative support, and I saw a need. This wasn’t a want, it was a need for our people.”
Damien Petersen Creator of 0800 HEY BRO and Family Harm Reduction leader at He Waka Tapu

Beatrice says this special combination is the key to the success of 0800 HEY BRO.

“You can’t just put anyone on the line; it’s got to be the right guys, with lived experience,” she says.

“It takes a lot for men to ring us, and sometimes they need to be shown someone cares.”

This is an attitude shared throughout the organisation, as He Waka Tapu CEO Jackie Burrows reflects.

“We’re using tāne who have experience with or have experienced family violence. They’re men working with men. Being Māori is a way of being; and for us, if you understand that, you get it, you can work here.

“Having experience in kaupapa is about understanding the strengths that you can bring to support wellbeing. When we employ people here, it’s not always about their qualifications – it’s about their aroha.” 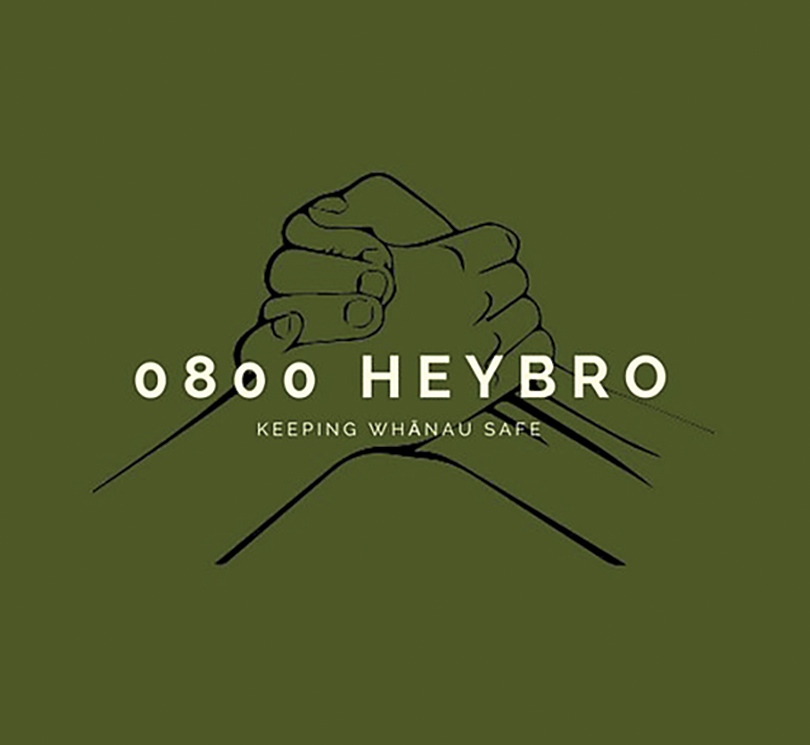 The success of 0800 HEY BRO also lies with the community of tāne who have made use of the service. It takes courage to pick up the phone and tell someone that you are on the verge of committing violence.

“Because that’s a huge step – to pick up the phone and admit you feel like you’re going to do something wrong.”

There is a lot of whakamā when it comes to talking about personal struggles, but Damien says that men can relate to their voices over the phone. At a surface level, this is as simple as men taking the initiative to talk to other men about their anger, and the violence that may stem from this anger.

“We’re using tāne who have experience with or have experienced family violence. They’re men working with men. Being Māori is a way of being; and for us, if you understand that, you get it, you can work here. Having experience in kaupapa is about understanding the strengths that you can bring to support wellbeing. When we employ people here, it’s not always about their qualifications – it’s about their aroha.”
Jackie Burrows He Waka Tapu CEO

While the concept might seem simple, it is the first of its kind. A great deal of responsibility and lived experience has gone into its development and the ongoing navigation with those using the service.

Although the service is run out of Ōtautahi, 0800 HEY BRO receives calls from across the country. The calls are not only related to domestic violence, but self-harm and sexual violence. Callers are supported in real time on the phone, as well as receiving in-depth support after that first call is completed. Programmes are put in place and tools are given to all callers – both tāne and wāhine – to navigate their relationships towards their own wellbeing. Jackie says this fits in with the broader kaupapa of He Waka Tapu – embedding preventative measures into our whānau and communities. 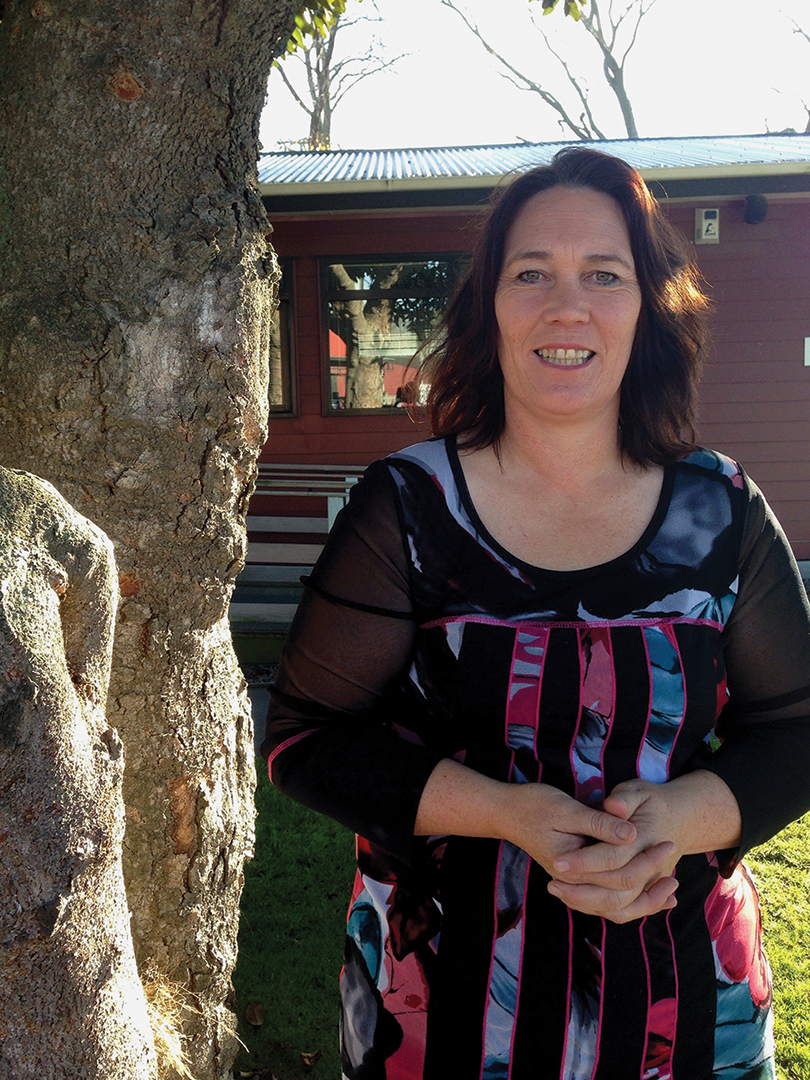 In the past, funding models have been geared towards crisis response, but by the time a whānau is in crisis, it is too late. But now the new direction set at government level places prevention at the heart of whānau well-being.

This new direction can be seen in the support provided to He Waka Tapu and 0800 HEY BRO by state services such as Integrated Safety Response (ISR), a multi-agency pilot led by New Zealand Police as part of the broader Family Violence and Sexual Violence programme. Canterbury District Director for ISR, Leanne McSkimming, considers the whānau-led and preventative approach of 0800 HEY BRO to be a key strength of the service. “It empowers whānau to take a step and make a choice towards becoming violence free,” she says.

Leanne says the decision to support 0800 HEY BRO was an easy one. “The service has been extremely life-changing for many whānau, where the cycle of intergenerational violence has been broken,” she says.

“There is a great deal of shame for a lot of perpetrators, and as a result traditional services did not meet whānau need.”

Here, conventional State services recognise they have a shortcoming that can be addressed through a kaupapa Māori approach – further evidenced by the fact that the ISR steering committee is currently chaired by its Ngāi Tahu representative, Robyn Wallace.

When Robyn reflects on the metaphor of the ambulance at the bottom of the cliff, she takes it a step further. “We want to be at the top of the cliff, or do away with the cliff altogether,” she says. “Te Rūnanga o Ngāi Tahu is not necessarily a provider, but we do support kaupapa Māori providers. 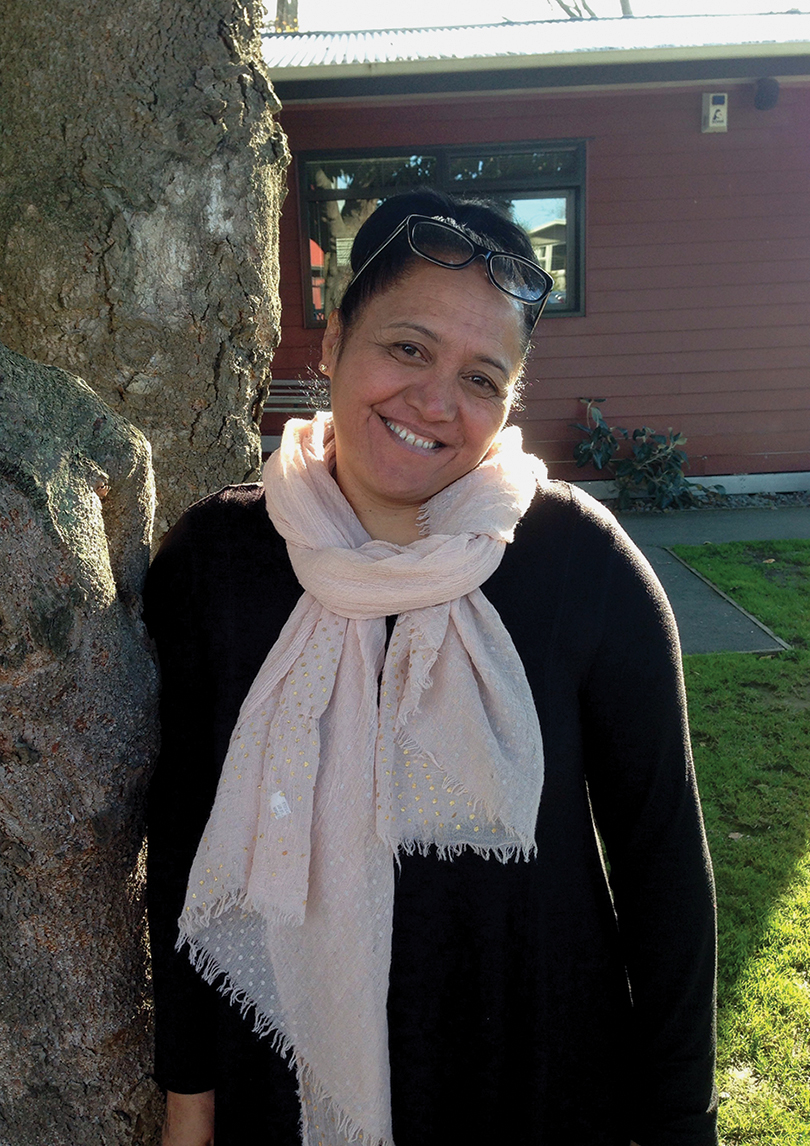 “We are always interested in wellbeing for Ngāi Tahu and Māori whānau, so we’re happy to support this programme, and it has had great results.”

For Jackie, 0800 HEY BRO is just another step in a long journey towards whānau well-being. “We’re still addressing colonisation issues and trauma in whānau. Even with support, until we get all those lined up and wellness coming right through at both ends, it’s a challenge,” she says.

“The dream for anybody that is sitting in this mahi is that you’re not needing to do this anymore.”

Part of the process of decolonisation is not just to identify and break down structures that have resulted in Māori subjugation, but to imagine, develop, and implement viable Māori alternatives to self-determine our futures together. This requires projects from across the spectrum of health, education, the economy, and the environment; led by and across whānau, hapū, iwi, and Māori.

0800 HEY BRO is just one example of the potential success that can be achieved. More and more, the Crown is recognising that Māori do have solutions to the challenges plaguing us and the world, and that with space to test, refine, and perfect these solutions we can create better opportunities for whānau going forwards.

The team at 0800 HEY BRO dream of scaling up so that it can be rolled out nationally, with locally responsive solutions in place across the regions. This is an effective metaphor for many Māori alternatives to the status quo: starting from an idea within whānau, rolling it out and up with support from community, and then being valued and funded as an effective Māori-led solution on a national level. It is these sorts of ideas and processes that shine lights towards a society, and an economy, of aroha. Until then, Hey Bro.